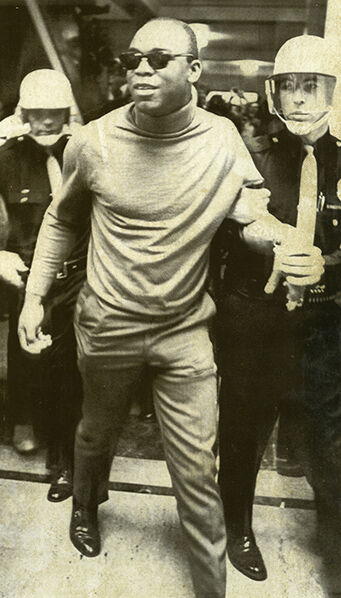 Leroy Keyes was one of more than 200 Purdue students arrested during a peaceful sit-in at the Administration Building, now the Hovde Hall of Administration, in spring 1969. 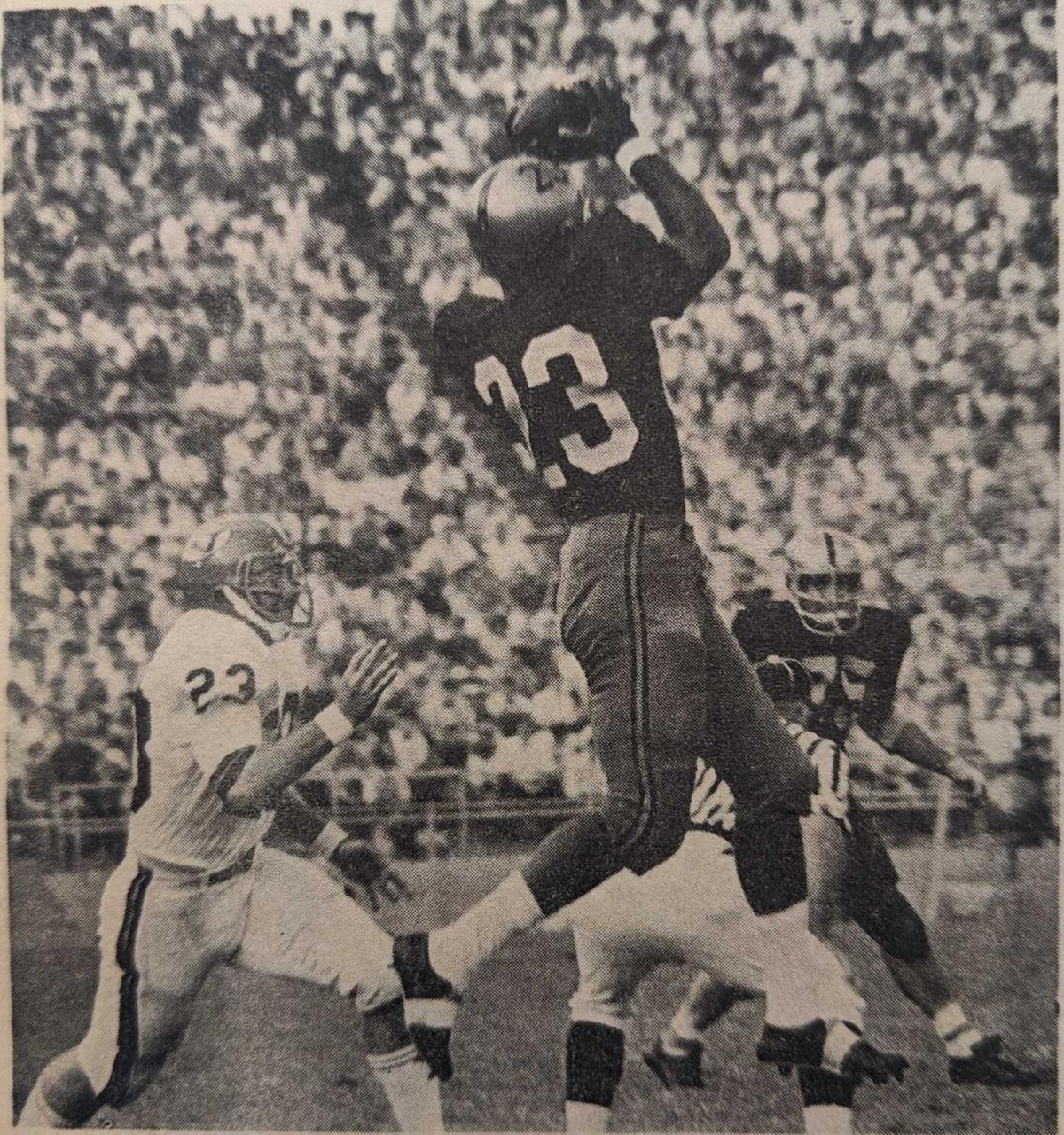 Then-senior halfback Leroy Keyes pulls down a reception during Purdue's 1968 game against Virginia. 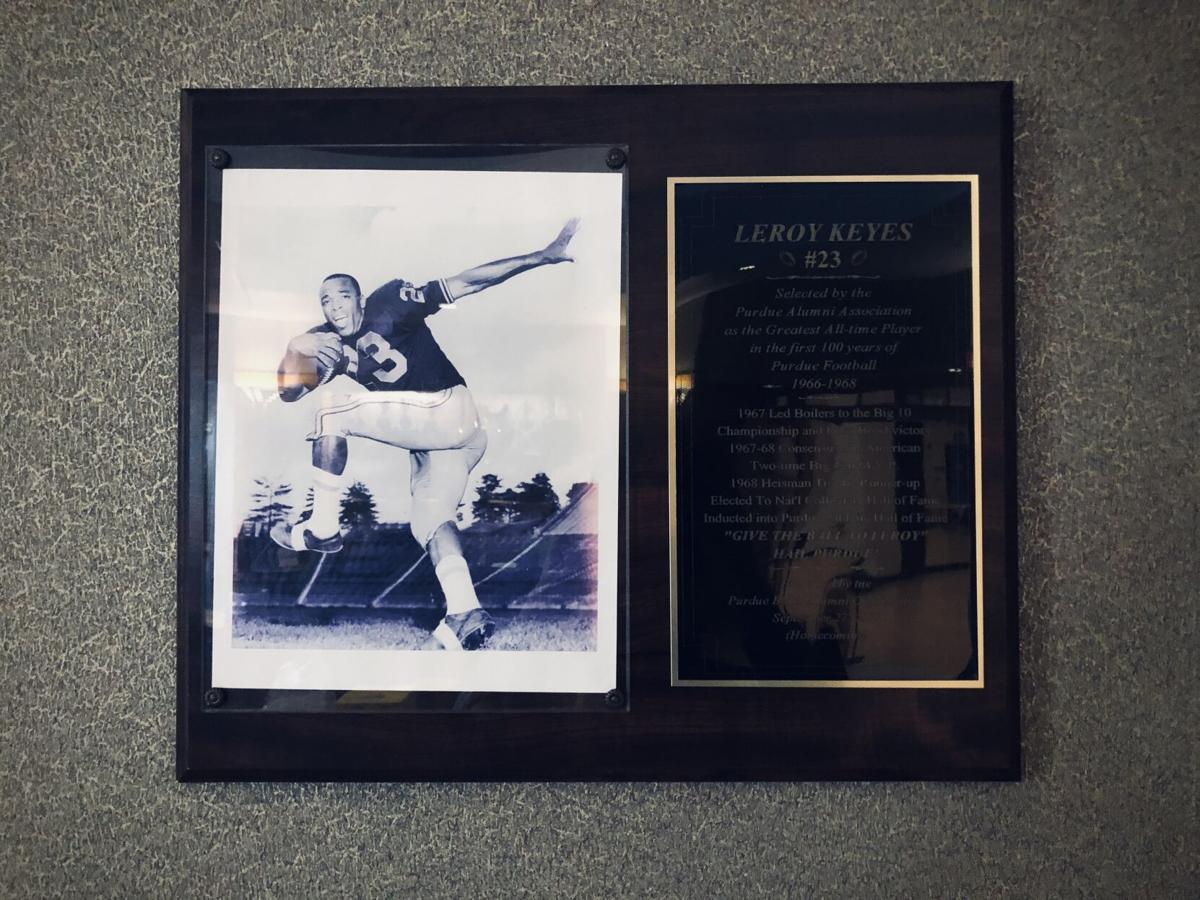 In the Black Cultural Center on campus, there is a plaque dedicated to the Purdue Football legend Leroy Keyes. It bears the slogan invoked by Boilermaker fans: "Give the ball to Leroy!" 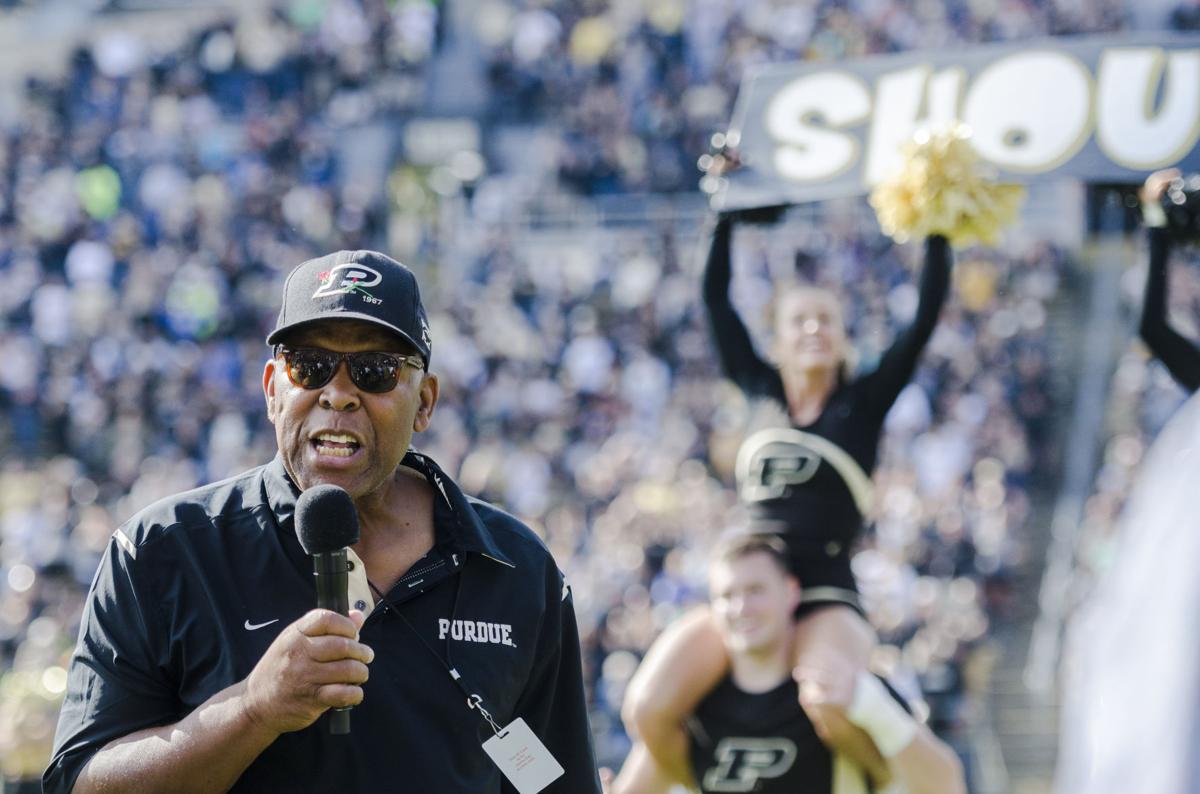 Leroy Keyes gets the crowd on their feet during the homecoming game against Iowa at Ross-Ade Stadium in 2016.

An Indiana Journalism hall-of-famer and a former Purdue defensive end remember Purdue legend Marvin Leroy Keyes as a football sensation, as do legions of Purdue fans.

But both people also recognize Keyes as a vocal activist and someone who wasn't apt to give staid speeches. Enthusiasm radiated from the man.

"Leroy was a special person for Purdue," said John Norberg, who wrote for the Lafayette Journal & Courier and is a Purdue historian. "To me, Leroy was the spirit of Purdue."

Former player Akin Ayodele, who is serving as a spokesperson for the Keyes family, said Keyes "never met a stranger." With anyone at any time, he was open to have a conversation.

"That was his love language, and that's just who he was as a human being," Ayodele said. "There was no hate, no malice, there was nothing negative about him. He always tried to get people to come together and do more."

Keyes, a two-time Heisman Trophy finalist, All-American and Purdue Athlete of the Century, died Thursday morning at 74, his family announced.

Ayodele, who played at Purdue from 1999-2001, said he had considered Keyes to be a father figure since he was 19. Growing up without a father and with few men who looked liked him, Ayodele, who is Black, said the kindness and mentorship that Keyes had shown meant everything to the young defensive end.

"From the time I stepped on campus and we met, he was so loving, open, honest, and knowledgeable," Ayodele said. "He shared so much wisdom with me, and he held nothing back."

Keyes, a native of a heavily segregated area in Newport News, Virginia, did not attend a school with non-Black students until he came to Purdue in 1966, Norberg said. He chose Purdue in part because most segregated universities across the South would not allow Black students to play football, according to Purdue archives.

He came to Purdue during one of the most conflict-ridden decades in American history, the 1960s. Protests broke out in campuses across the country, mainly pertaining to a suppression of Black Americans' civil rights and the Vietnam War.

Keyes was adored by Purdue football fans the minute he first stepped onto the field as a Boilermaker. Thousands of fans donned buttons and flew banners that read, "Give the ball to Leroy!" The tradition of jangling keys prior to kickoffs is believed to have originated with Keyes' last name.

The man's life as an activist and a voice for change, however, define a major portion of his legacy.

In the spring of 1968, during Keyes' junior year at Purdue, about 150 students staged one of the biggest and most significant protests to happen on Purdue's campus at the steps of the Administration Building, now known as Hovde Hall of Administration.

The peaceful demonstrators took red bricks from the then-construction site of the Pharmacy Building and marched to the Administration Building. They laid the bricks down and planted a sign that read, "The Fire Next Time," a reference to the classic book by civil rights icon James Baldwin in which he elucidates Black Americans' struggle for equality and the structures of white supremacy.

"He was willing to put himself at risk for what he believed in, and for what was right. That's what he was like his whole life."

Keyes was joined by Eric McCaskill, a track star who also hailed from Keyes' Virginia hometown, and Roger Blalock, a forward for the Purdue basketball team at the time. All of the men are featured in the documentary "Black at Purdue," which documents efforts to overcome the inequality of 20th-century Purdue.

"They were risking their scholarships to go and take part of this demonstration in front of Hovde Hall," Norberg said. "The fact that they were willing to risk that gave that much of a credence to what they were saying. They were serious about this."

The stand that Keyes, McCaskill, Blalock and hundreds of other students took that day urged then-Purdue president Frederick Hovde to recognize that Purdue was not doing all it could to support Black students.

The march played a role in the formation of the Black Cultural Center in the early 1970s.

"Leroy was a trailblazer, a true renaissance man." BCC Director Renee Thomas said. "Leroy was celebrated for his athleticism and he chose not to be silenced during times of racial turmoil."

In 1969, students marched again to the administration building to protest tuition hikes and demand a higher number of Black students on campus. Some staged a sit-in at the Purdue Memorial Union, causing the building, normally open 24/7, to close. Others flooded the hallways and stairwells outside of Hovde’s office, demanding to speak with the man.

The number of student demonstrators in the building reached more than 200, according to Exponent reporting from the time. Keyes, who had not planned to actively participate in the sit-in protest, had joined the students after seeing their protest outside, Norberg said.

The students sat in the Administration Building far past its 5 p.m. closing time to get the chance to speak to Hovde and have the tuition spike reversed. Eventually, police officers were called in to disperse the peaceful protesters.

Keyes was among those arrested in the student protest, photos in the Purdue archives show, by campus police in riot gear in May 1969. Chants of "Hail Purdue" could be heard among the crowd of protesters.

Articles that appeared in the Exponent during and after the protest differ on the exact number of students arrested during the May protest. The initial report mentioned 229 students, and coverage of the legal defense concurred, but a letter to the editor published just after the event mounting a "legal defense" by the students was signed "the 225 students."

As the number of arrests climbed and the protest continued on, the officers made a deal with the students: Leave the building and they would release the students that had been arrested, including Keyes. The students complied.

"I personally believe (the students leaving) had to do with the fact that they didn't want to see Leroy Keyes arrested," Norberg said. "But he was willing to put himself at risk for what he believed in, and for what was right. That's what he was like his whole life."

Keyes had found himself embroiled in this atmosphere months after he had been drafted into the NFL by the Philadelphia Eagles in January 1969.

Keyes would graduate from Purdue to become an Eagle, chosen with the third overall pick in the 1969 NFL draft. He would play at running back and strong safety for five seasons, four as an Eagle and one with Kansas City. He retired from the NFL with 369 rushing yards and eight interceptions in 48 games.

For 16 years he was a "desegregation specialist" for Philadelphia's city school district before returning to Purdue to work in the athletic department.

He fully retired in 2011, after stints with the John Purdue Club and Purdue Athletics as an assistant athletic director. He also coached running backs at Purdue in 1995-96.

Through fiery speeches and a contagious positive attitude that he consistently maintained, Keyes left a legacy that would affect the University for generations to come, Norberg and Ayodele said.

"When he spoke, he didn't stand there and give a quiet serious speech about whatever he was talking about: He was excited. He just exuded this enthusiasm that was contagious."

Keyes was committed to Purdue on many levels, Ayodele said. He poured the full force of his personality into each initiative.

"He was bigger than life. He was a big, giant human being that was so easy in all aspects," he said. "We're all lucky to be part of his time here on Earth."