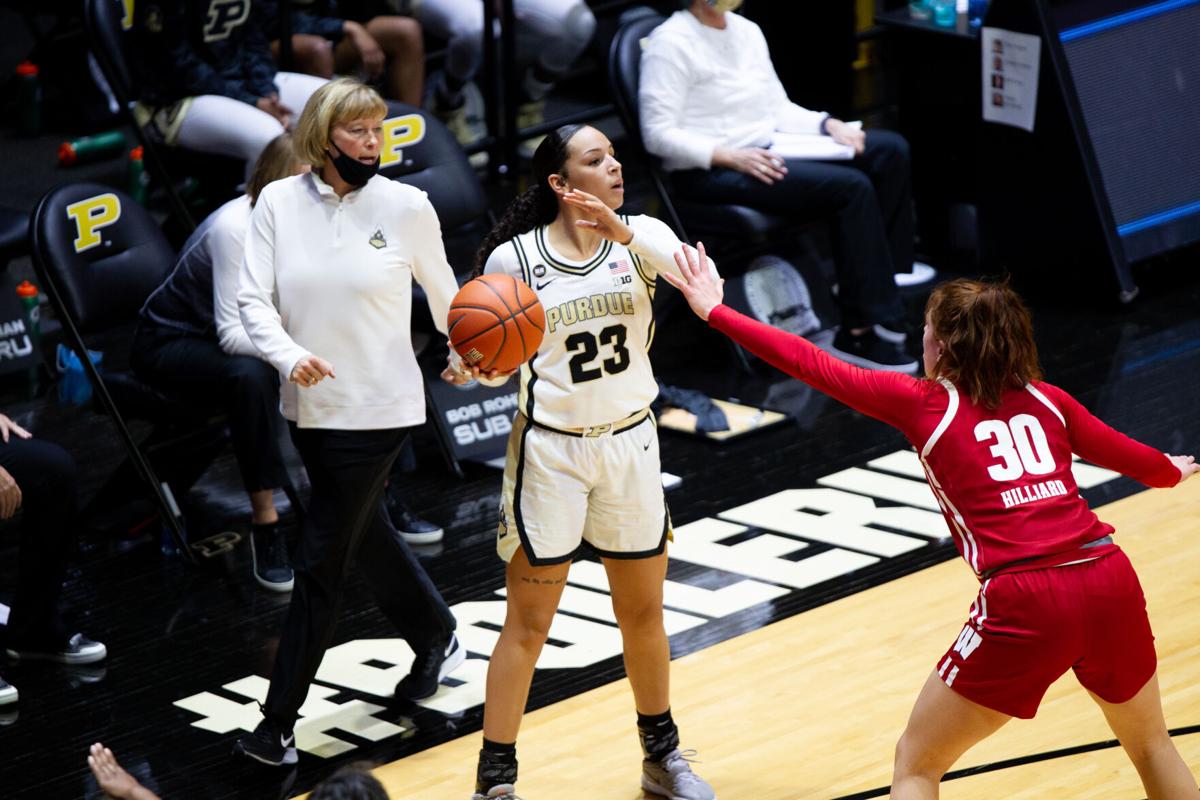 Junior guard Kayana Traylor yells to her teammates as head coach Sharon Versyp moves behind her. Traylor had 8 points in Purdue's 56-55 come-from-behind win Thursday night in Mackey Arena. Versyp won her 300th game as Purdue head coach with the victory. 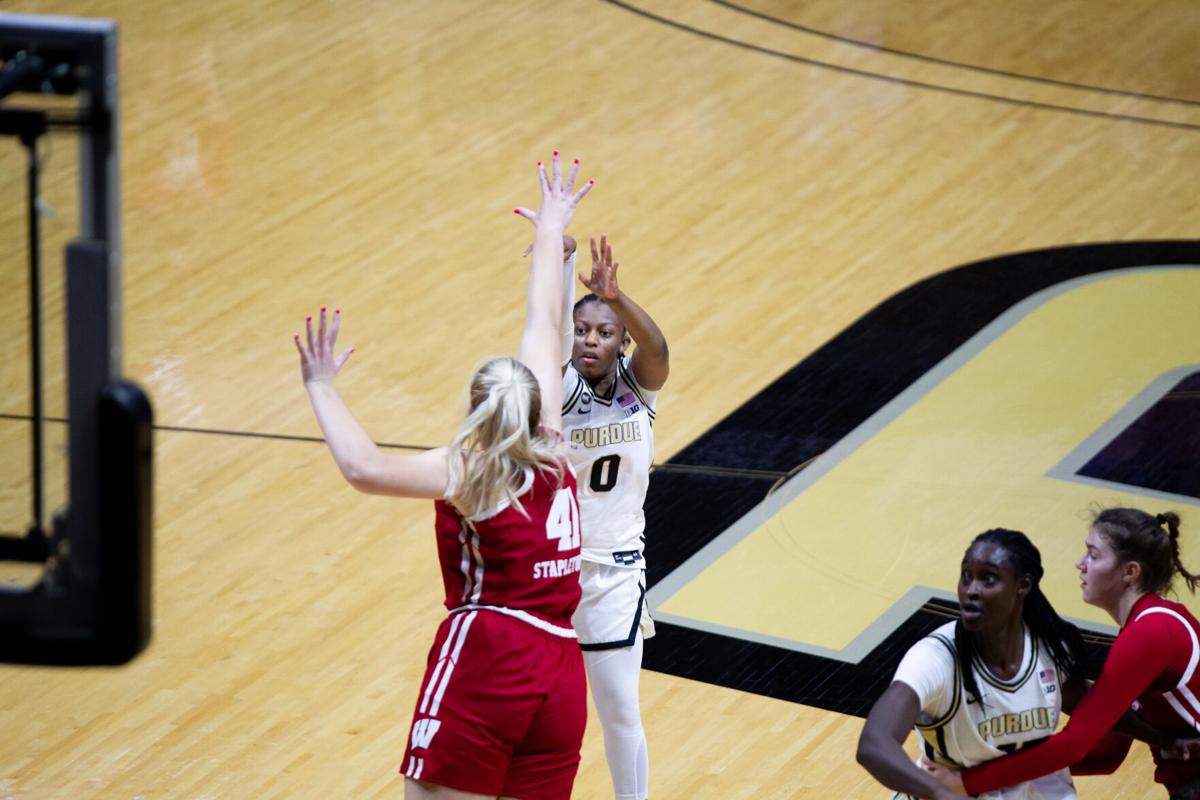 Junior guard Brooke Moore hits a 3-point shot to take the lead late in the fourth quarter. Moore had 12 points on 4 of 7 from the field – including 3 of 5 from 3-point range – to go with 1 of 2 at the line to lead the Boilers in scoring.

Junior guard Kayana Traylor yells to her teammates as head coach Sharon Versyp moves behind her. Traylor had 8 points in Purdue's 56-55 come-from-behind win Thursday night in Mackey Arena. Versyp won her 300th game as Purdue head coach with the victory.

Junior guard Brooke Moore hits a 3-point shot to take the lead late in the fourth quarter. Moore had 12 points on 4 of 7 from the field – including 3 of 5 from 3-point range – to go with 1 of 2 at the line to lead the Boilers in scoring.

After a tight defensive slugfest in the fourth quarter, Purdue came out with a come-from-behind win over Wisconsin 56-55, earning head coach Sharon Versyp her 300th win as Purdue’s head coach.

After a hard-fought first half where Purdue led by five, 25-20, Wisconsin (3-9, 0-9) began a methodical comeback. The Badgers took their first lead of the second half quickly after back-to-back layups by Imani Lewis and a pair of free throws by Sydney Hilliard less than two minutes were gone in the third.

“They went on a seven-point run, but we called timeout and were able to come back from that,” Purdue's Versyp said. “We’ve had a pretty tough stretch but we’ve learned, and we fought it out to the last second, and that’s why I’m so proud.”

Locker room gets 🔥 for 300 wins! pic.twitter.com/rHYB1YGalE

The Boilers' (6-6, 3-5) lead slowly slipped away as they began to lose focus and commit more miscues – six of their 18  fouls came in the third quarter.

“Though we fell down, we can’t be fouling,” senior forward Fatou Diagne said. “We can’t think about the score, we just have to play our game.”

As the fourth quarter drew to a close, both teams felt the heat of the moment. The Badgers went 0 of 6 in a span of three minutes, and the Boilers went 0 of 8 in the same timeframe.

In the tense finals moments, Junior guard Brooke Moore overcame the Boilers' 3-point struggles when she scored her third 3 the night. This put the Boilermakers up, 54-53, with 36 seconds left.

As the clock ticked down, the Lewis hit a layup with 8 seconds remaining just short of a shot clock violation.

Purdue called time out at the 7-second mark and in the next 6 seconds missed a 3-point shot by Karissa McLaughlin as Fatou Diagne got an offensive rebound and was fouled by Wisconsin's Hilliard in the lane. Diagne missed the first, but made the second to earn the win, 56-55.

Fatou Diagne tallied a double-double and hit a clutch free throw late to help @PurdueWBB coach Sharon Versyp get win No. 300. Highlights vs. the Badgers: pic.twitter.com/C5FbLb80NM

Farquhar notched her second double-double of the season, scoring 11 points while grabbing 12 rebounds. It was her third game of the season with double-digit rebounds.

Junior guard Moore spoke on Farquhar’s presence in the paint. Moore said her teammate's presence opens up shots and expands the offense on the perimeter as Farquhar's rebounding prowess draws a crowd in the paint.

The victory snapped a four-game losing streak for Purdue. After multiple close losses, including the 7-point loss to Iowa on Jan. 18, Versyp said Thursday's win can change things.

“When you lose you get fragile," she said, "but you’ve got to have the energy to come back and win a game like this and I think this win will be good for them mentally and physically.”

The Boilers continue their Big Ten play against the No. 11 Michigan Wolverines. The game will be played at 2 pm in the Crisler Center and will be broadcast on the Big Ten Network.

• The Badgers scored 16 points off of turnovers, while Purdue had 12

• The fourth quarter was particularly brutal from the floor as Wisconsin shot 25.% and Purdue shot 15.8%

• Four Purdue starters played more than 29 minutes and freshman guard Madison Layden led the team with 35:45 of the 40-minute game

After a low scoring first quarter from both sides, the Boilermakers sluggishly lead the Wisconsin Badgers 25-20 while continuing their three-point blunders.

Throughout the first half, the Boilermakers used their precision passing to get their forwards in great positions to cut through the paint. Although, their three-point shots continue to miss their marks. The Boilermakers shot 23% from the three-point line, making just three of their 13 attempts, a percentage that is 10% less than their 33% season average.

Despite keeping the score close with aggressive defense, the Badgers continuously allowed the Boilermakers to maintain control of the lead with their nine first-half fouls and nine turnovers.

The Purdue women’s basketball team won a close game against the Wisconsin Badgers, 56-55, Thursday night in Mackey Arena. The Boilermakers (6-…