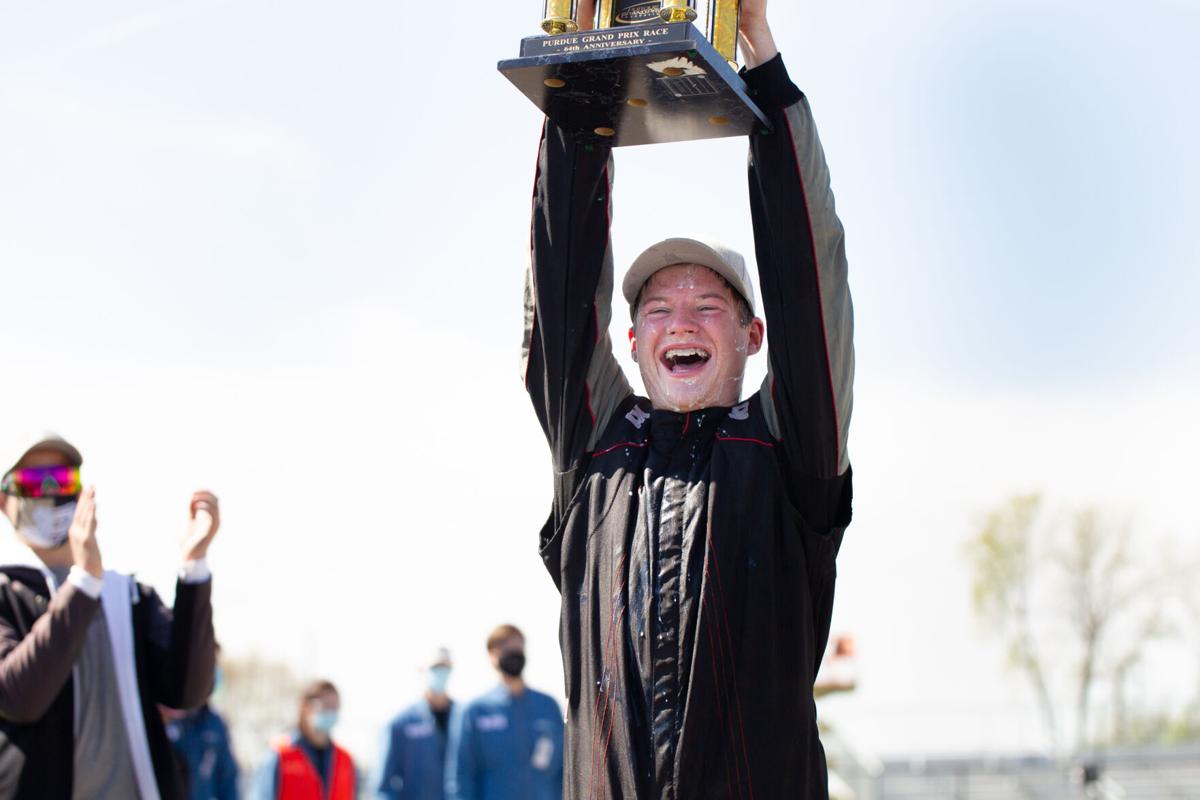 Freshman Jacob Peddycord raises the trophy after dousing himself in milk at the end of the race. 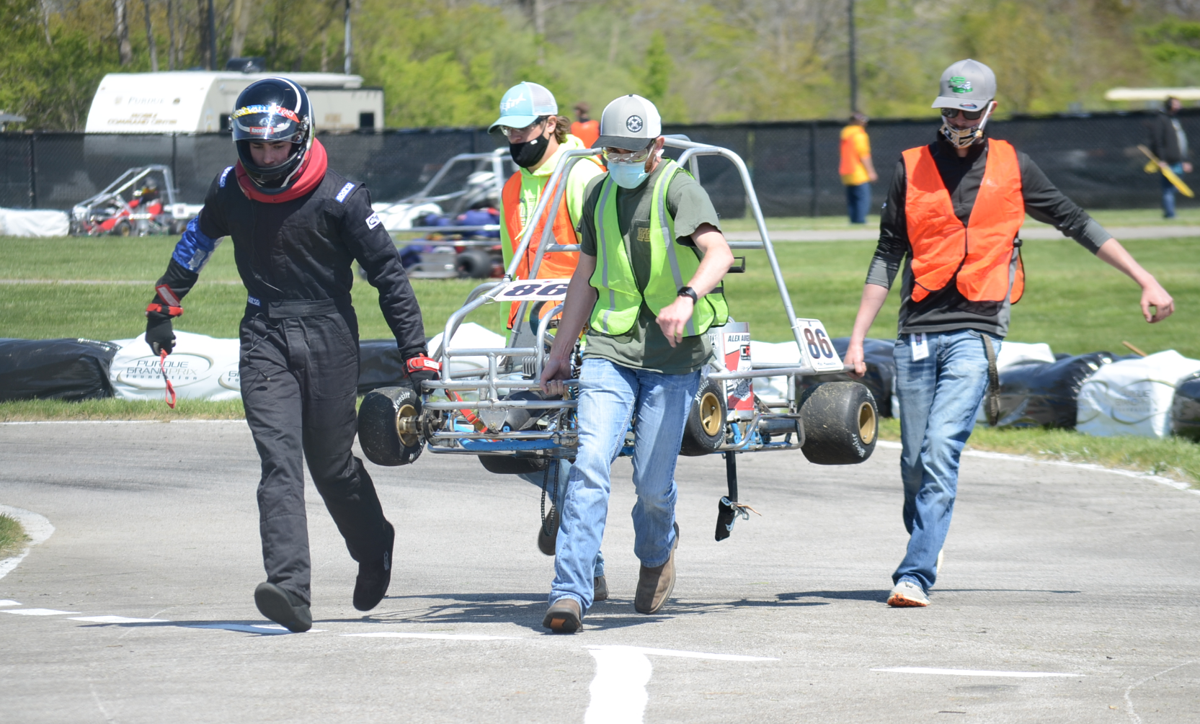 Alex Augenstein of Cary Racing No. 2 had to pull out of the race early after he crashed trying to overtake Cavalry's Jacob Peddycord. 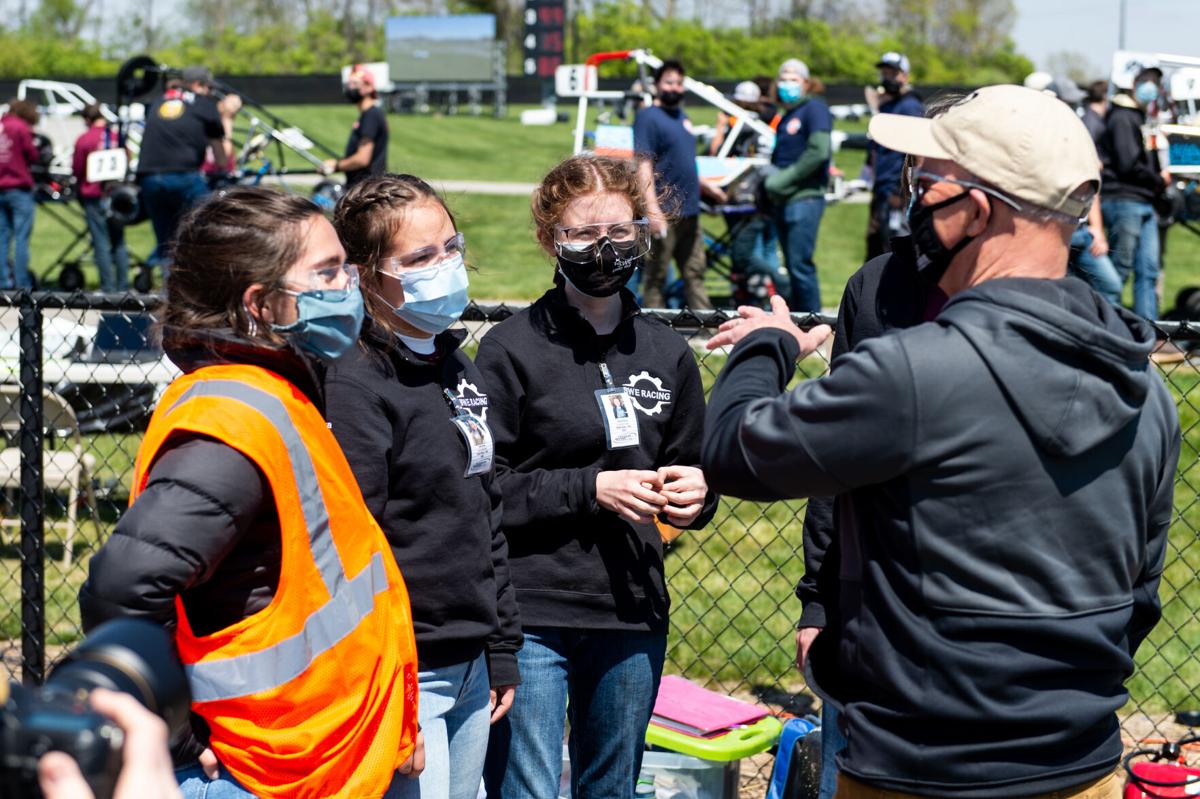 Purdue President Mitch Daniels talks to one of the Purdue Society of Women Engineers teams before the 64th Grand Prix. 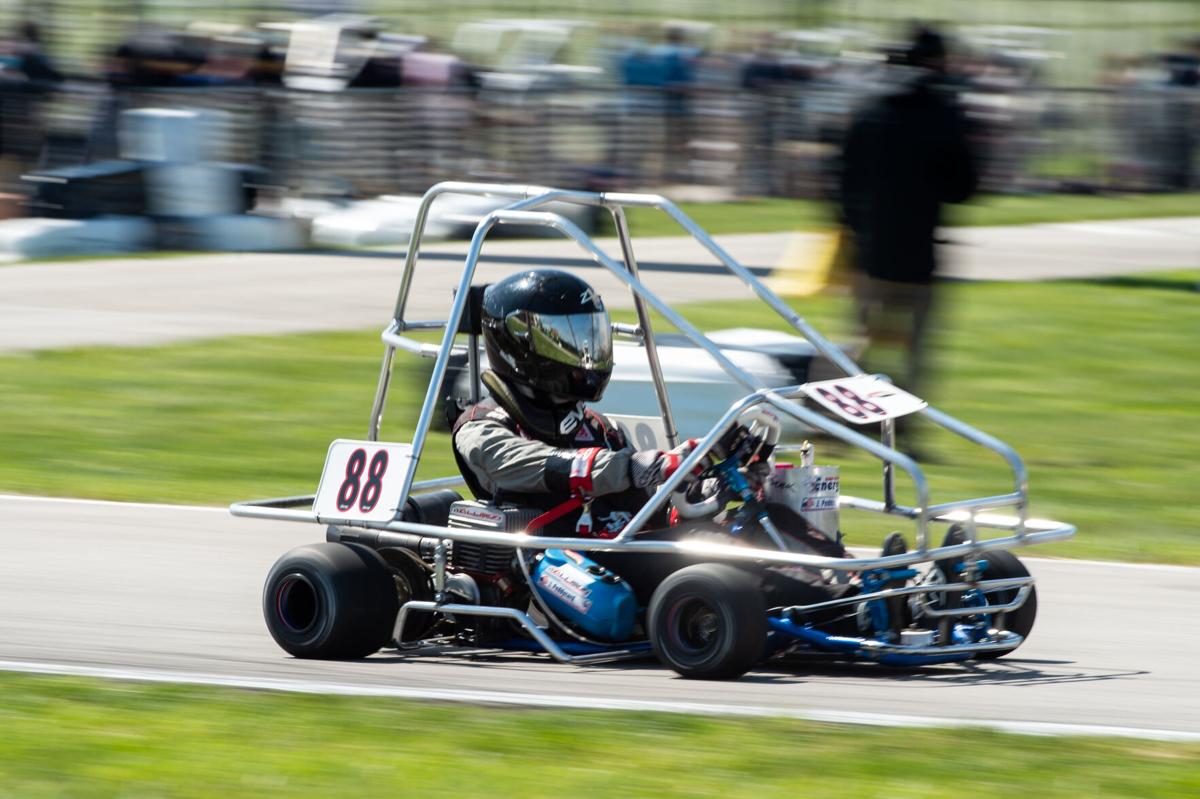 Freshman Jacob Peddycord rounds the starting corner in a blur. Peddycord led for nearly 150 laps after trailing the first 10, often lapping other contestants.

Teams gathered around their go-karts to make final mechanical tweaks. Drivers adjusted their racing suits. On a sunny Sunday afternoon before a crowd of fans, they were preparing for what Purdue President Mitch Daniels called “the greatest Grand Prix ever.”

Cavalry Racing driver Jacob Peddycord, who was the top qualifier coming into the race, took the lead early on in the 64th Purdue Grand Prix. And he kept it, so well that he didn’t cede first place for the remaining 150 laps, even when the team took its first and only pit stop.

Peddycord ultimately earned the right to drink the victory milk — and pour it on his own head — after finishing seven laps ahead of the second place team.

“I can’t believe it,” Peddycord said after the race. “As a freshman, it's great.”

The freshman in the Polytechnic Institute started the race in pole position thanks to a strong qualifying time. He faced trouble early, however, mistakenly driving in reverse to go off the side of the track at the race’s start.

The team was able to push the kart back on to the track and was granted a second opportunity by a restart, which allowed Peddycord to get back in front.

“We had problems starting up,” Peddycord said. “We didn’t warm up our engine, which we should have on the start, so I had to catch back up and then I was kind of thankful that it happened.”

Once Cavalry racing took the lead, it did not let go. Even as the team took a pit stop, the leaderboard didn’t change. Peddycord was laps ahead of the competition.

The Cavalry kart, which was provided by four-time winner Jimmy Simpson, came out of the race with multiple scratches as it took a beating on many turns. To personalize the cart, all the team members signed the fuel tank.

Simpson won the Grand Prix racing for the Electric Vehicle Club in 2013 and Delts Racing from 2014-16 before racing in the Indy Lights Series. Simpson is still the only racer to win four times, as well as four times consecutively.

As the race went on, more and more karts were eliminated when they became too damaged to continue racing.

“It was a lot of fun. I’m surprised to see so many cars knocked out, it’s crazy,” said Caleb Neal, a sophomore in the College of Liberal Arts.

Cary Racing No. 2 held on to second place for most of the afternoon until its kart went off the side of the track and did not return from pit road.

Prior to the accident, Cary Racing No. 2 had lapped so many competitors that it took several laps for the team to drop from the leaderboard after it left the competition.

Peddycord knew the race was over once Cary’s kart left the track.

“Once I saw him in the grass,” Peddycord said his goal was to “just take it easy, just finish the race.”

Alex Augenstein, the driver for Cary Racing No. 2, was the only driver to pass Cavalry. To catch up to Peddycord, Augenstein was cutting corners and taking his tires onto the grass, making turns as tightly as he could.

Reckless driving ultimately caught up with the driver: His cart was carried off the track.

This year's Grand Prix was the largest in-person event of the school year.

“I think it’s great that we got to come,” said Eduardo Pons de la Garza, a senior in the College of Engineering. “There’s a lot of people that put a lot of effort in the cars, so being able to compete is a big step forward.”

Rowan Wallar, a junior in the College of Agriculture, was crowned this year's Grand Prix queen during the homecoming ceremony.

“This is my first Grand Prix,” Wallar said. “I didn’t go my freshman year and obviously last year it didn’t happen, so it’s been absolutely phenomenal to see an in-person Grand Prix.”