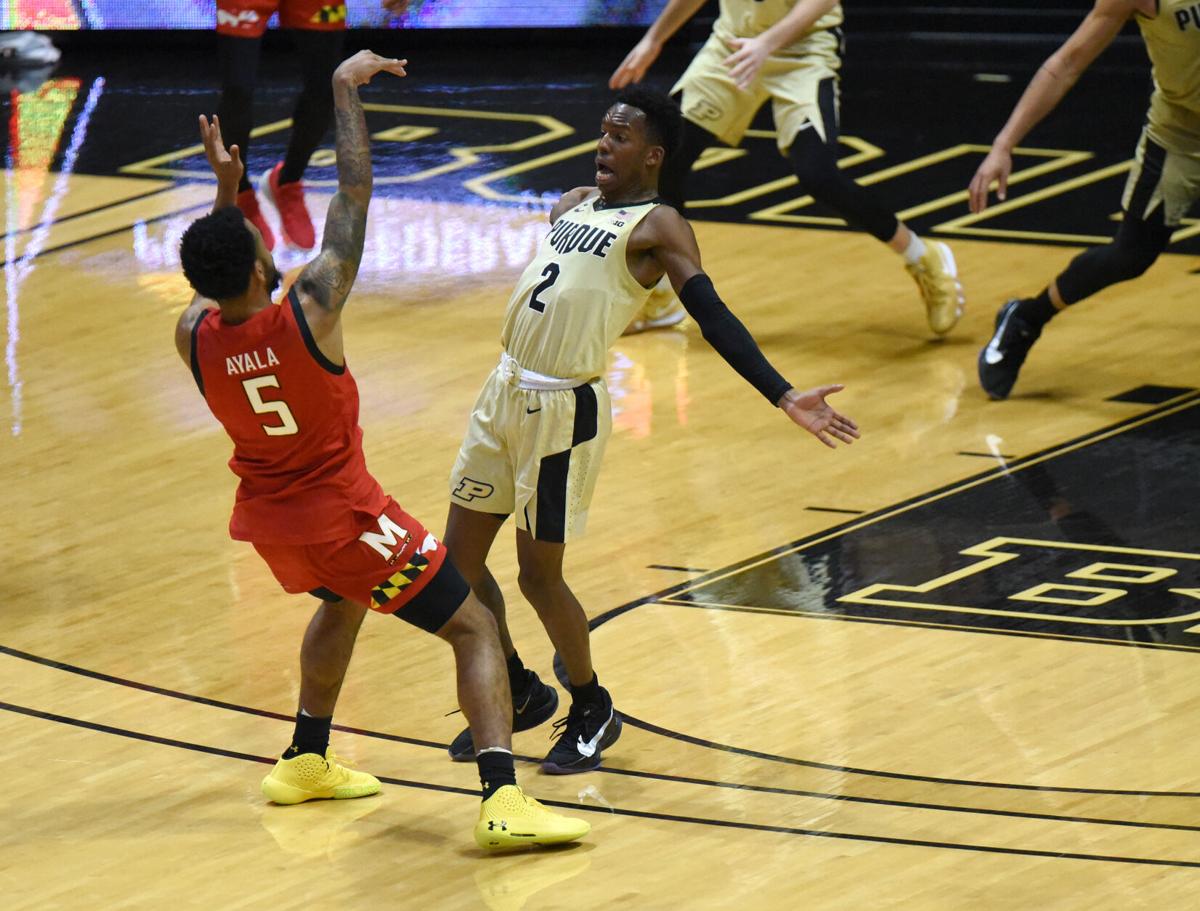 Purdue's Eric Hunter backs off as Maryland's Eric Ayala attempts a potential game-tying 3-pointer with 6 seconds left in the game. Purdue held on to beat visiting Maryland, 73-70, on Christmas Day. The win moved Purdue to 2-1 in the Big Ten. Hunter was 1 of 4 Boilermakers with double-digits, scoring 16 points on 6 of 15 from the floor – including 2 of 6 from 3-point range. Ayala 13 points for the Terps. 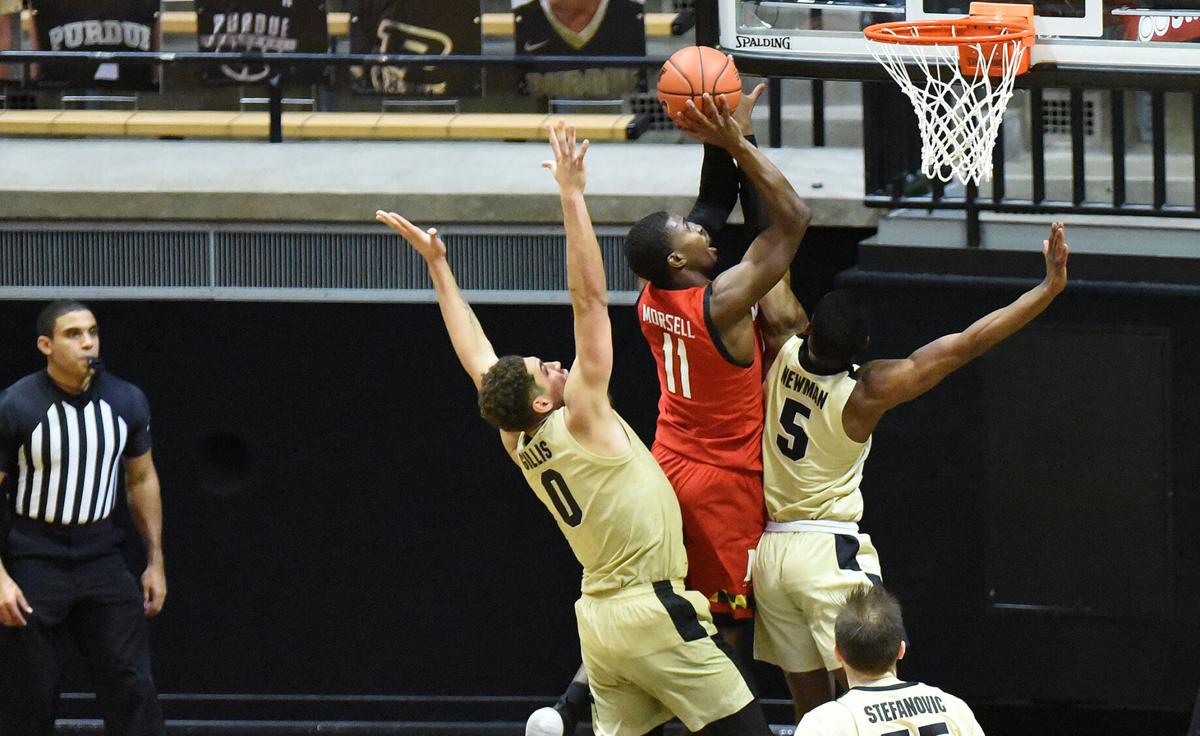 Maryland's Darryl Morsell drives to the basket and is fouled by Brandon Newman (5) and Mason Gillis (0) defends from behind with the score Purdue 72, Maryland 70. Morsell missed the shot, then hit 1 of 2 free throws. Trevion Williams grabbed the rebound, was fouled and made 1 of 2 free throws, making the score, 73-70. Then Maryland missed another potential game-tying shot.

Purdue's Eric Hunter backs off as Maryland's Eric Ayala attempts a potential game-tying 3-pointer with 6 seconds left in the game. Purdue held on to beat visiting Maryland, 73-70, on Christmas Day. The win moved Purdue to 2-1 in the Big Ten. Hunter was 1 of 4 Boilermakers with double-digits, scoring 16 points on 6 of 15 from the floor – including 2 of 6 from 3-point range. Ayala 13 points for the Terps.

Maryland's Darryl Morsell drives to the basket and is fouled by Brandon Newman (5) and Mason Gillis (0) defends from behind with the score Purdue 72, Maryland 70. Morsell missed the shot, then hit 1 of 2 free throws. Trevion Williams grabbed the rebound, was fouled and made 1 of 2 free throws, making the score, 73-70. Then Maryland missed another potential game-tying shot.

It was another tale of two halves for Purdue basketball on Christmas Day, as the team took on Maryland in Mackey Arena.

The game gave the Boilers (7-3, 2-1 Big Ten) a much-needed conference win after the double-digit loss to Iowa Tuesday night, beating the Terps, 73-70, on Friday.

Going into the half up 13, the Boilermakers could do no wrong. The team had committed three turnovers, was shooting 41.9% from the field and was making more than half of its 3-point attempts. Junior guard Eric Hunter Jr. had already broken double-digit points, and redshirt freshman forward Mason Gillis was leading the teams' rebounding with five grabs.

The second half began to unravel for the Boilers from the get-go. A four-and-a-half minute scoring drought, three Boilermakers entering foul trouble and seven more turnovers combined to help Maryland slash its deficit to a tie during the second half.

The Boilers consistently fought back, but never got the lead back up into double digits for the rest of the game. Freshman guard Jaden Ivey hit a pair of 3s in the middle of the half to extend the lead back to 7 points to give Purdue some breathing room, but going into the last minute, the game was tied at 70.

Hunter gave Purdue the lead back, 72-70, on a layup with 38 seconds left. Maryland had 2 chances to tie the game late. First, Daryll Morsell drove the baseline for a potential game-tying jumper with 19 seconds left, but he was fouled by Brandon Newman. Morsell missed both free throws and Trevion Williams grabbed the rebound, was fouled and made 1 of 2 at the line.

Then the Terps' Eric Ayala missed a 3-pointer with 6 seconds left. The ball went out of bounds. Hunter Jr. was fouled after receiving the inbounds pass with 4 seconds left and was fouled. Hunter missed both his free throw attempts, but after grabbing the rebound Maryland was unable to get a shot off to tie the game one last time.

Trading fouls and out-of-bound plays, the teams fought for control of the ball over the last 60 seconds, until free throws from Trevion Williams sealed the game for the Boilers.

Eric Hunter Jr. scored 16 points, including the go-ahead basket late in the game, to help @BoilerBall get the 73-70 win over Maryland.Highlights from the win: pic.twitter.com/jHcNYADHbh

Coach Matt Painter was impressed with Ivey's performance given his early-season injury and comeback that had some pitfalls.

"I thought tonight he had a good vibe about him, made some plays," Painter said. "(He) obviously made those two 3s when we were struggling in the second half and they were kinda having their way with us – that really helped us."

"I've been struggling for a couple of games and to see one go in finally was a confidence booster for me," Ivey said. "After (the pregame) shoot-a-round, I just kept shooting and I prided myself on that I am going to keep shooting. I put in so much work, I put in a lot of shots, a lot of time in the gym, I'm not going to settle for less ... I'm confident in myself. I know how much work I've put in. It just comes with preparation. I was ready to take the shots and I just knocked them down."

"Brandon was just tough down the stretch," he said. "He hit a couple of pullups, he hit the one 3, he had a driving layup, but he wanted the basketball. He made some plays on his own besides the one 3 that was ill-advised, he took all good shots and he was able to make them. So, I was happy for both those guys.

It was not a pretty game from the line for either team, but both teams hit 3s with some regularity.

Maryland was as a dismal 10 of 21 from the line – including 0 of 2 at a key point. With Maryland trailing by 2, 72-70, Darryl Morsell was fouled going to the basket. He missed both free throws. Purdue's Williams grabbed the rebound with 18 seconds left and he made 1 of 2 giving the Terps another chance to tie the game. This time Eric Ayala missed a 3 with 6 seconds left. After the errant shot, the ball went out of bounds to Purdue. Hunter got the inbounds pass and was fouled with 2 seconds left. He missed both his free throws.

Maryland grabbed the rebound, but could not get off a shot before the final horn.

QB Clay Millen decommits from Arizona; Wildcats now on the hunt for a class of '21 quarterback

Purdue controlled the boards, winning that battle 41-31, but lost turnovers 10-5.

Williams, who was called for a foul in the first minute of the game, was limited in his time on the floor. He played 16:24 of the 40 minutes. Zach Edey played 18:21 and had 6 points in 7 rebounds.

"There's a fine line when you find ways to win," Painter said. "Last year, we had some games where we did not find ways to win where something like this (losing a lead and gaining it back) would happen, you'd crumble. With that being said, we are very fortunate that they missed their free throws."

• Purdue improved to 7-3 overall and 2-1 in the Big Ten with a 73-70 win over Maryland on Christmas Day at Mackey Arena.

• The game was the first played for Purdue ever on Christmas Day.

• Purdue improved to 6-4 all-time against Maryland, including 4-1 at Mackey Arena (4 straight wins). Eight of the 10 games have been decided by single-digits and five by five or fewer points.

• The victory was Purdue’s fifth straight home win and improved Purdue to 50-9 at Mackey Arena against Big Ten foes since the start of the 2014-15 season.

• Brandon Newman scored 17 points with two rebounds and an assist, making 3-of-6 from deep. It marked the fourth straight game he has made at least two triples.

• Eric Hunter Jr., tallied 16 points, the third time this year that he scored at least 15 points.