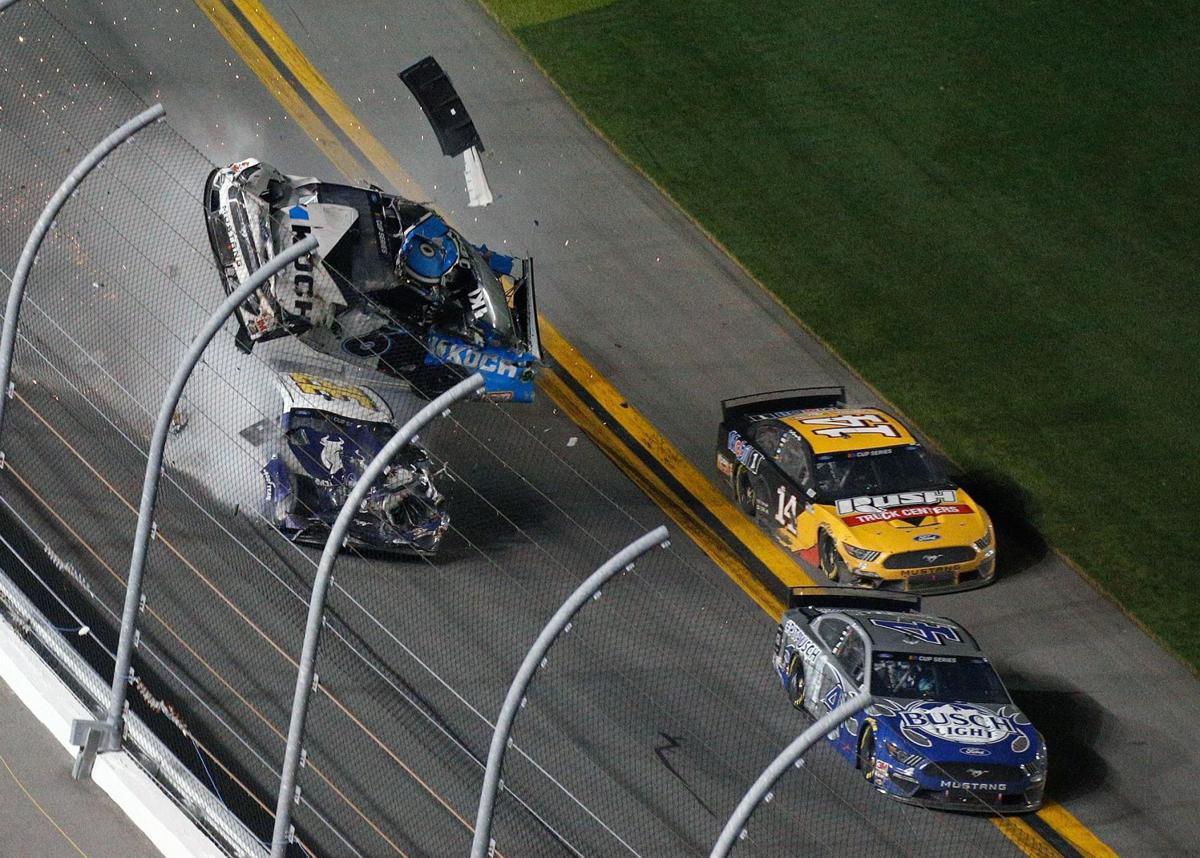 Ryan Newman crashes in the tri-oval coming down to the checkered flag at the Daytona 500 at Daytona International Speedway, Monday, Feb. 17, 2020. 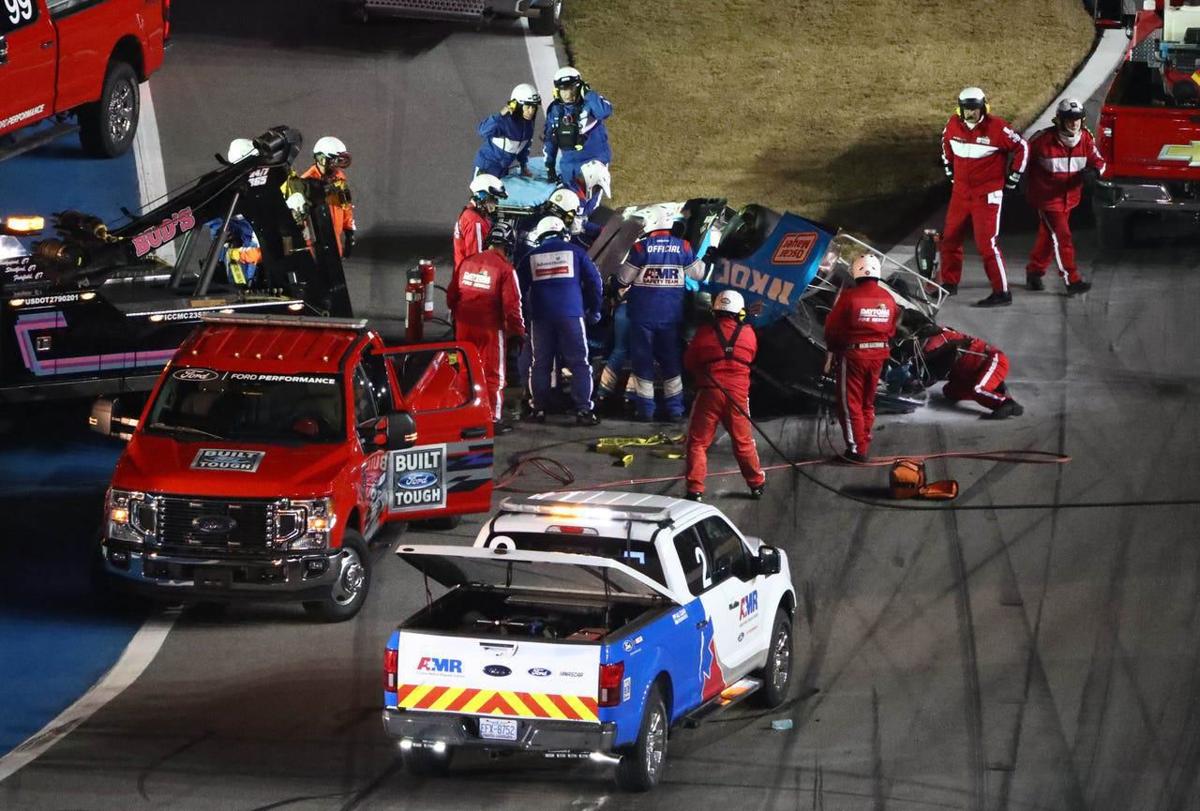 Rescue personnel tend to Ryan Newman on Monday at the Daytona 500.

Ryan Newman crashes in the tri-oval coming down to the checkered flag at the Daytona 500 at Daytona International Speedway, Monday, Feb. 17, 2020.

Rescue personnel tend to Ryan Newman on Monday at the Daytona 500.

We can thank God for that, because how Newman, a Purdue alumnus, ever survived Monday's crash at the Daytona 500 is almost impossible to fathom.

Newman's car went where no cars are ever supposed to go. Airborne. Flipping. On fire.

It looked like a stunt from an Arnold Schwarzenegger movie, but scarier, because this was real. People watched it on TV and cried. People at the track put up black curtains so you couldn't see the aftermath.

For those of us who remember Dale Earnhardt Sr. getting killed in a last-lap crash at the 2001 Daytona 500, this felt eerily similar. And in some ways, it seemed worse at first.

Newman's wreck seemed more ghastly. It was more terrifying on replay. It was the sort of thing that makes you bow your head and hit your knees and, even then, expect the worst.

But then came news via Roush Fenway Racing, Newman's employer, late Monday night. The statement read, in full: "Ryan Newman is being treated at Halifax Medical Center. He is in serious condition, but doctors have indicated his injuries are not life-threatening. We appreciate your thoughts and prayers and ask that you respect the privacy of Ryan and his family during this time. We appreciate your patience and cooperation and we will provide more information as it becomes available."

Newman, 42, almost won the 2020 Daytona 500. He was leading in the final lap in his No. 6 Ford until his bumper got locked up with driver Ryan Blaney, who was actually trying to help push him to the win. Then, after Blaney turned him sideways and Newman hit the wall, his car bounced back into the track and got hit again by Corey LaJoie. And then the nightmare began.

Sports Pass: Get around our paywall for only $30/year. Unlimited access to all of The Charlotte Observer's national award-winning sports coverage.

Photos show the underside of Newman's car as it careened above the field. Pieces were flying off. Although you couldn't see Newman at all in those photos, the pictures somehow still felt a little obscene -- like you were seeing something you shouldn't.

Then came the rest of the crash, as Newman's car slammed into the asphalt and skidded across the track, on its roof and on fire. A shower of sparks flew. Denny Hamlin, the race winner, celebrated briefly (he would apologize for doing so later, as would team owner Joe Gibbs). He also said: "I think we take for granted sometimes how safe the cars are. But number one, we're praying for Ryan."

Yes, the cars do seem safe. They have seemed safe for a while now. Earnhardt's death 19 years ago was the last time a driver died in any of NASCAR's top three national touring series.

Earnhardt's death shook the sport and changed it dramatically. Safety suggestions became safety mandates. Walls literally became softer. A sport that had too often killed its own for too many years (Fireball Roberts, Adam Petty, Neil Bonnett, Joe Weatherly) was still seeing cars get smashed up, but drivers were no longer dying at the highest level.

Newman's wreck thankfully won't change that statistic -- at least according to what we heard Monday night.

At 42, Newman is a likable and opinionated veteran of the garage, with 18 Cup wins and 51 poles. When he first entered the Cup series full-time in 2002, he did so with such a flourish that he beat out Jimmie Johnson to become rookie of the year. I remember how much fun he had in those early years with his numerous victories on pole night and race day, and him saying sometimes: "Nothing wrong with grinning when you're winning."

Newman is one of the few drivers you will find with a college diploma, having graduated with an engineering degree from Purdue. He has two lovely daughters. He and his wife of 16 years, Krissie, announced only last week via social media that they were going to amicably split.

Newman has been involved in several awful-looking crashes before, including another at Daytona, and he has kept on driving. Hopefully he will have the chance to drive again some day before too long -- either in a race car, or simply shuttling his daughters around the family's Rescue Ranch in Statesville along some of their beloved dogs.

It's hard to tell now. The crash was terrible. The car was nearly obliterated.

But Ryan Newman is alive. And after what happened, that alone feels like a victory.

Purdue alumnus Ryan Newman crashed his car in the final lap of Monday's Daytona 500. Here are some Tribune Media Service photos of the event a…

Ryan Newman is awake and speaking with his family and doctors, a day after a horrific crash during the final lap of Monday's Daytona 500, his team announced.

"Ryan Newman remains under the care of doctors at Halifax Medical Center in Daytona, Florida. He is awake and speaking with family and doctors.

"Ryan and his family have expressed their appreciation for the concern and heartfelt messages from across the country. They are grateful for the unwavering support of the NASCAR community and beyond."

The major development was a relief for the NASCAR family and fans throughout the country who were unsure about Newman's status after the crash.

The racing team had previously posted an update shortly before noon Tuesday thanking fans for their support and confirming Newman was still being treated at the hospital less than a mile away from Daytona International Speedway.

The racing team had announced late Monday night Newman was in serious condition, but that his injuries were not life-threatening.

No details about the extent of the injuries or prognosis for recovery were released Tuesday.

Newman, 42, was bumped by Ryan Blaney during the furious push to the finish line of a race that was extended to 209 laps due to earlier crashes. Newman lost control of his No. 6 Ford and slammed into the wall before going airborne. As Newman's car descended, the No. 32 car of Corey LaJoie hit the driver's side of Newman's car at top speed, sending it airborne again and into multiple rolls.

The car caught fire before emergency crews could put out the fire and work to extract Newman from the vehicle.