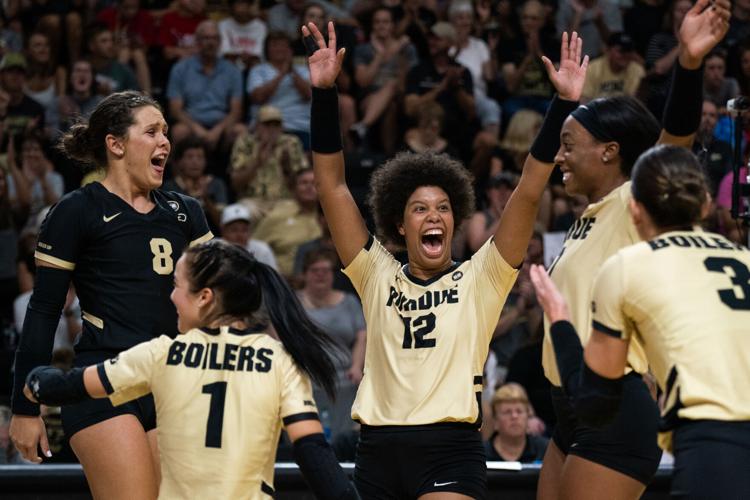 Purdue swept Ball State in game two of the Stacey Clark Classic in front of a sold-out crowd before jumping into conference play this week against No. 6 Minnesota. 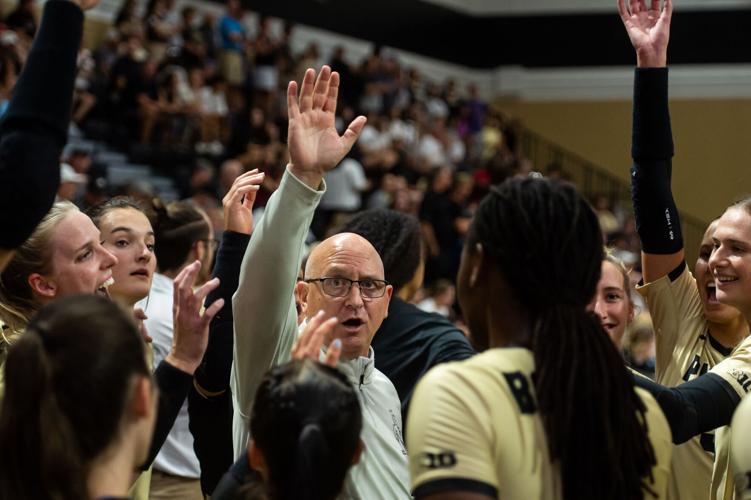 Head coach Dave Shondell talks to his team before its match against Ball State on Saturday. Purdue swept its final non-conference match of the season.

Purdue swept Ball State in game two of the Stacey Clark Classic in front of a sold-out crowd before jumping into conference play this week against No. 6 Minnesota.

Head coach Dave Shondell talks to his team before its match against Ball State on Saturday. Purdue swept its final non-conference match of the season.

Purdue volleyball is on a roll.

The team, which swept its last three opponents, is off to a 9-1 start to the season. It wrapped up non-conference play on Saturday by winning the Stacey Clark Classic in front of a sold-out home crowd.

In fact, Holloway Gymnasium is sold out for the rest of the season, Purdue Athletics announced Friday.

The team might need that fan support in the coming weeks with the approaching conference play. Six of Purdue’s Big Ten opponents are ranked in the top 25 of the American Volleyball Coaches’ Association Poll. No. 6 Minnesota will stop by Holloway Friday.

Purdue got the season going with two sweeps in its opening tournament at the end of August, and at the time, head coach Dave Shondell noted “a lot of (the players) have not been in these positions before this year.”

Every player that started for the Boilers this year has already started in more matches than they did last year, with the exception of sophomore middle blocker Raven Colvin.

“This is a fairly inexperienced team as far as playing in matches for Purdue,” Shondell said. “It’s not inexperienced as far as how long they’ve been at Purdue or in our gym.”

One of the players with the least experience in Holloway is freshman outside hitter Eva Hudson.

She’s been key to the Boilers’ immediate success. Hudson was the first Big Ten Player of the Week and has been named Freshman of the Week twice. She averages 4.85 kills per set, best in the conference and 10th in all of D1 volleyball.

Something “very rare about Hudson,” Shondell said, is her ability to “carry the team at times,” which they’ve been depending on. He pointed to moments in the Northern Kentucky game Thursday where he noticed the team “relying too much on (Hudson) and (fifth-year middle blocker Hannah Clayton).”

Clayton has played in all 34 sets this year, boasting the team’s highest hitting percentage at .352. She was a four-year starter at Iowa and came in as one of the most match-seasoned players on the team. Shondell said the biggest thing she brings to the team right now is her experience, adding “she knows what she’s doing out there offensively.”

Even though Purdue out-blocked opponents 24-7 this weekend, the middle blocker position is one Shondell said he hopes to see improvements in. One player the Boilermakers have on their roster but have only used a handful of times so far is sophomore middle blocker Lourdès Myers.

Myers has played in eight sets so far and is someone Shondell said he hopes to work into more rotations against Big Ten opponents, given she stands 6 feet 3 inches.

This Is The Worst Rodgers-Led Packers The Eagles Have Faced

“I think we’ve got enough depth on this team that there’s going to be some (lineup) movement throughout the entire season,” Shondell said. “I’m hoping that some of our younger players will continue to develop — Myers would be a good example of that.”

The team’s depth extends to all of its positions, including its pin hitters and, most notably, the defensive specialists.

Senior libero Maddie Schermehorn said one of the strengths of this team is its back row and its ability to be independent and “coach themselves” without always having to rely on a coach for feedback.

“I think our back court defense is one of our bright spots right now,” Shondell said. “We’ve got all of our ball control people playing pretty well, and that’s something that we need to have moving forward.”

He attributes Purdue’s ball-control to being “what’s put (the team) ahead of the curve” so early and what’s allowed them to focus on improving other positions on the court.

“(Our first pass defense) has made it easier for our setters to make that transition from not playing much to being able to deliver a good ball and have a good offense,” Shondell said earlier this month. “I think the connection with the setter and all of our hitters needs to improve, but that’s something that’s gonna take time because it’s a new situation for them.”

Junior setter Megan Renner has been the Boilermakers’ starting setter for 10 games. Based on length of seasons, Shondell compared that to having started just a few games in football, and said he’s looking forward to seeing how she develops down the road.

“I feel comfortable out there now,” Renner said. “I’m feeling like myself on the floor, and every game I get more comfortable with everybody out there.

“I think we just become more of a cohesive unit with every single game we play.”

Schermerhorn said the connection between her and Renner as the teams’ libero and setter is not one she thinks about much on the court.

With 10 games down, the Boilermakers are exactly a third of the way through the regular season. The team’s only loss was to then-No. 4 Louisville, last year’s overall No. 1 NCAA tournament team, and one Shondell thinks they’ll be ready for if they face off again.

“The most exciting thing about this team is that we’re a work in progress,” Shondell said. “We have a lot of new moving parts that are playing, and I feel good about the direction we’re going.”