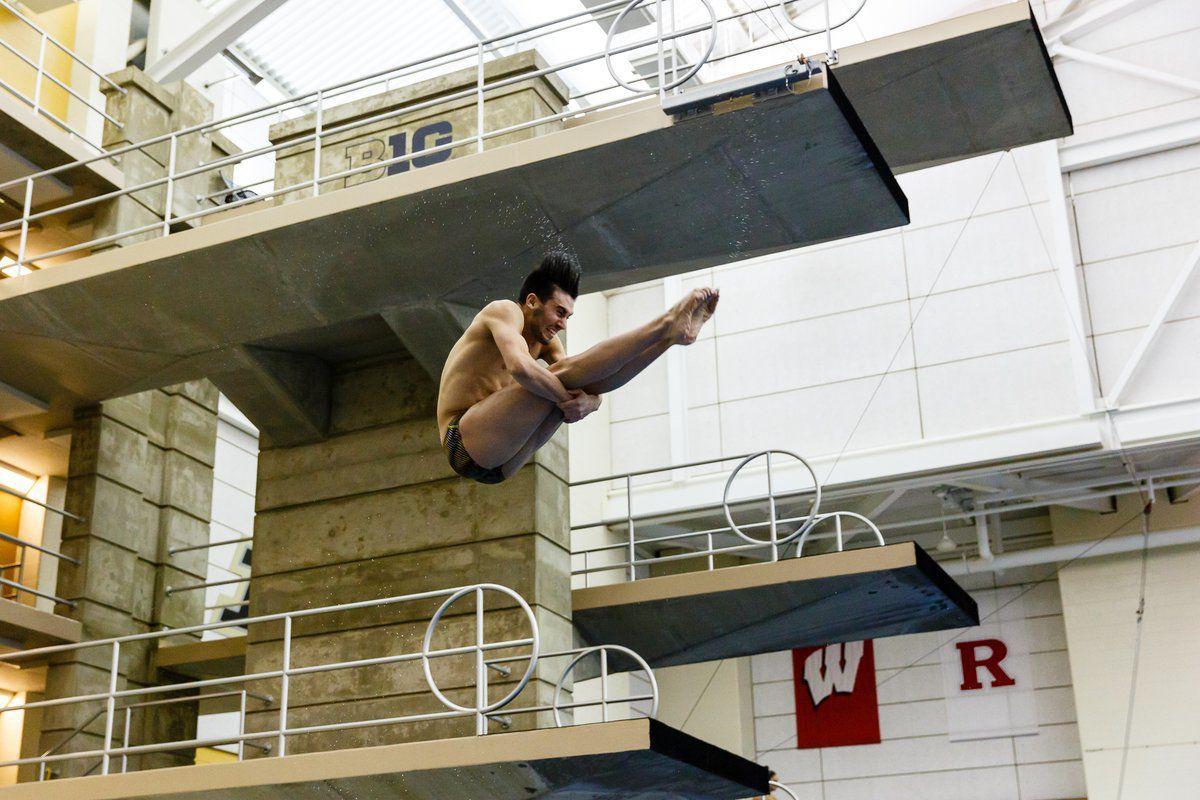 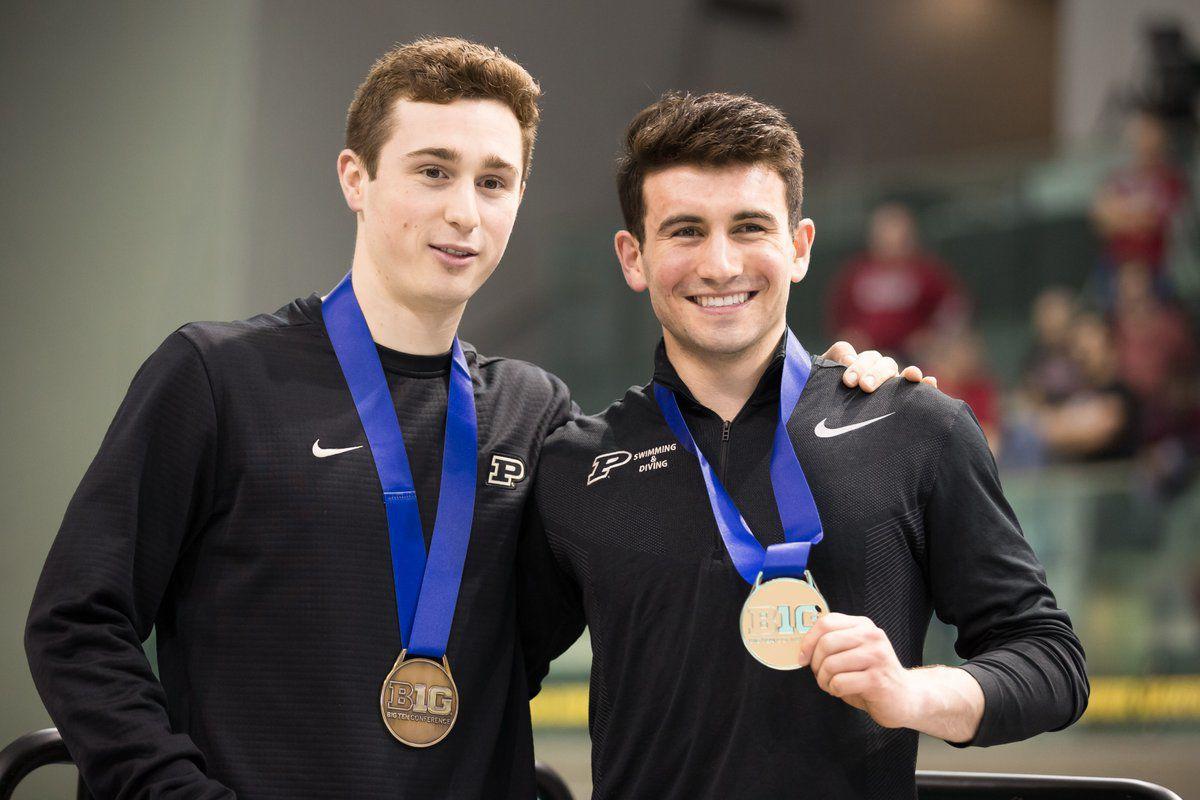 Freshman Ben Bramley (left) and junior Brandon Loschiavo pose for photos on the podium after taking third and first, respectively, on the 10-meter platform event during the 2019 Big Ten Championships.

Freshman Ben Bramley (left) and junior Brandon Loschiavo pose for photos on the podium after taking third and first, respectively, on the 10-meter platform event during the 2019 Big Ten Championships.

On a wall in the atrium of the Boilermaker Aquatic Center, high above the visitors below, is a wall decal that honors Purdue’s most decorated athlete across all sports.

That athlete is one of Greg Duncan’s idols.

That athlete returned to his alma mater to advise the divers and help coach.

That athlete is David Boudia.

Among the sophomore diver’s other idols are head diving coach Adam Soldati and redshirt senior Steele Johnson. Being able to train and compete with these athletes is partially a reason why Duncan transferred to Purdue a year ago from the University of North Carolina, where he was named ACC Diver of the Year in 2017.

It wasn’t a smooth transition, however. There were different training styles and hours. The workouts were harder, but humbling. That’s where Soldati helped him learn to battle through the mental adversity.

Diving is a highly repetitive sport. Walk up the stairs, approach the platform or board, go through your routine, perform the dive and leave the pool. Over and over and over again, divers do this all day. It’s easy to get lost in the routine and become complacent. Soldati makes sure that doesn’t happen by approaching each day with a new idea.

“I think one of his most underrated talents is his ability to paint a picture with his words,” Duncan said.

Soldati, the U.S. Olympic Diving coach, will go home and analyze the day, seeing what bigger ideas the team can use to refocus on the exact same routine.

“He’s so good at keeping you in the moment, training you and saying, ‘It’s just diving,’” Duncan said. “Through that, you’re able to simplify and not worry about everything else that could come into your brain.”

The sophomore transfer has become more consistent, focusing on “in-the-pool cues” which are things the divers need to focus on every time they approach the board.

That elite coaching has paid off for Duncan and his teammates, who placed fourth at the Big Ten Championships this past weekend in Iowa City, Iowa.

If Elgton Jenkins returns to action, Packers will face an unexpected-but-welcome tough call at left tackle

The sport is highly individualized, but can be team-oriented at the college level when everyone competes for the same team. Purdue’s divers push each other to be the best, even when they are standing on the podium.

Duncan grabbed a bronze medal in both the 1-meter and 3-meter springboard while freshman Ben Bramley received his own bronze for the 10-meter platform.

The newcomer missed the silver by 0.2 points, but had a stellar performance in the preliminary round, finishing at the top of the qualifiers by over 13 points with a score of 472.15.

As Bramley fell to third in the finals, it was again Soldati who told him, “Don’t focus on the result.”

Diving is a continuous sport and as a freshman, Bramley has a long road ahead of him. The mental aspect of the sport can eat away at a diver’s mind. In addition, junior Brandon Loschiavo reinforced that with corrections and by improving his mental focus, brighter things are in Bramley’s future.

Loschiavo has overcome those mental hurdles, as evidenced by his back-to-back individual Big Ten Championship in the 10-meter platform. He joins Boudia as the only two Boilermakers to repeat as champions in the same event in consecutive years.

“It was a lot more nerve-wracking than I expected, just trying to hold the title,” Loschiavo said. “But I was just trying to focus on the corrections we were making during practice.”

Loschiavo shared the podium with Bramley, which brought back fond memories of when he was on the other side of things. Johnson won the event in 2017 at the Big Ten Championships, and Loschiavo placed third.

Johnson had surgery in early February on his right foot that has caused him pain his entire career, he announced on Twitter. Being sidelined for the remainder of the season has been a challenge, but it hasn’t stopped him from helping the team overcome their mental hurdles.

“We see him working hard and persevering outside of the pool,” Loschiavo said. “And that drives us to persevere and work hard in the pool too.”

The Boilermakers will send a handful of divers to the NCAA Championships in March. Over Spring Break, Purdue hosts the Zone C Championships. Any qualifiers from there will then head to Austin, Texas, at the end of the month for the NCAA National Championships.