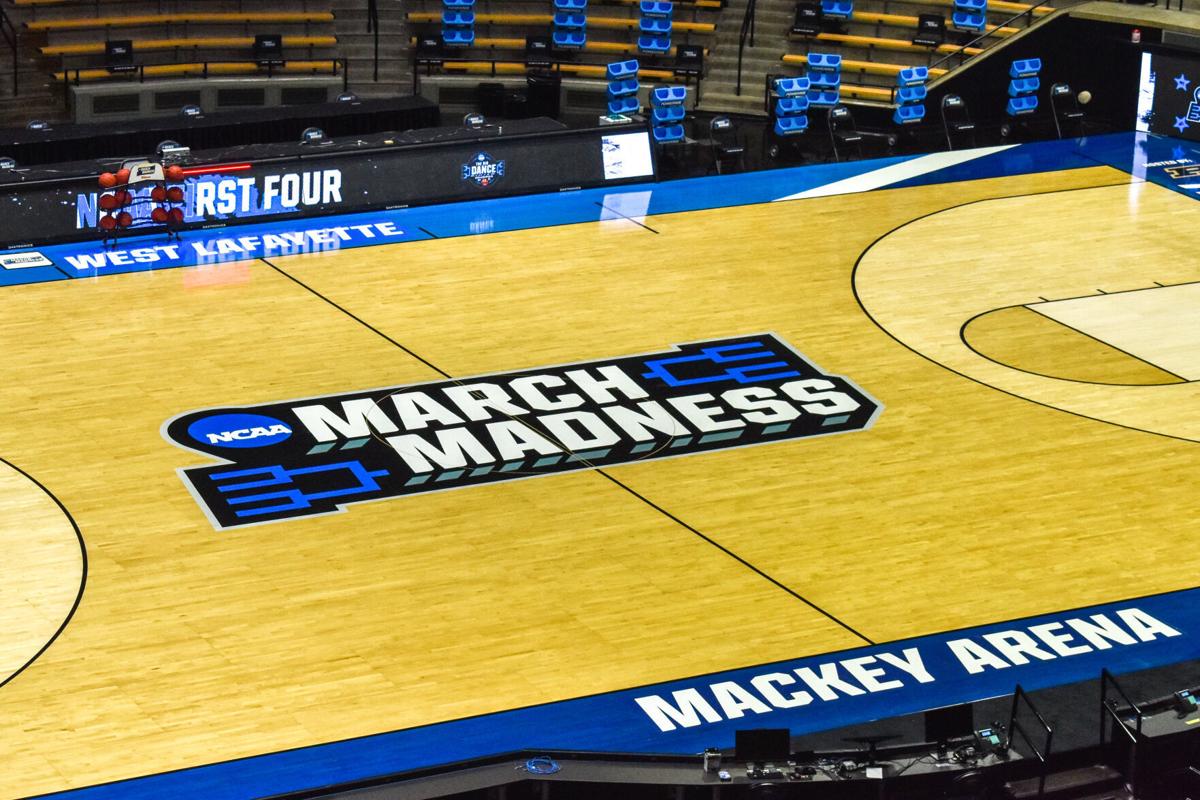 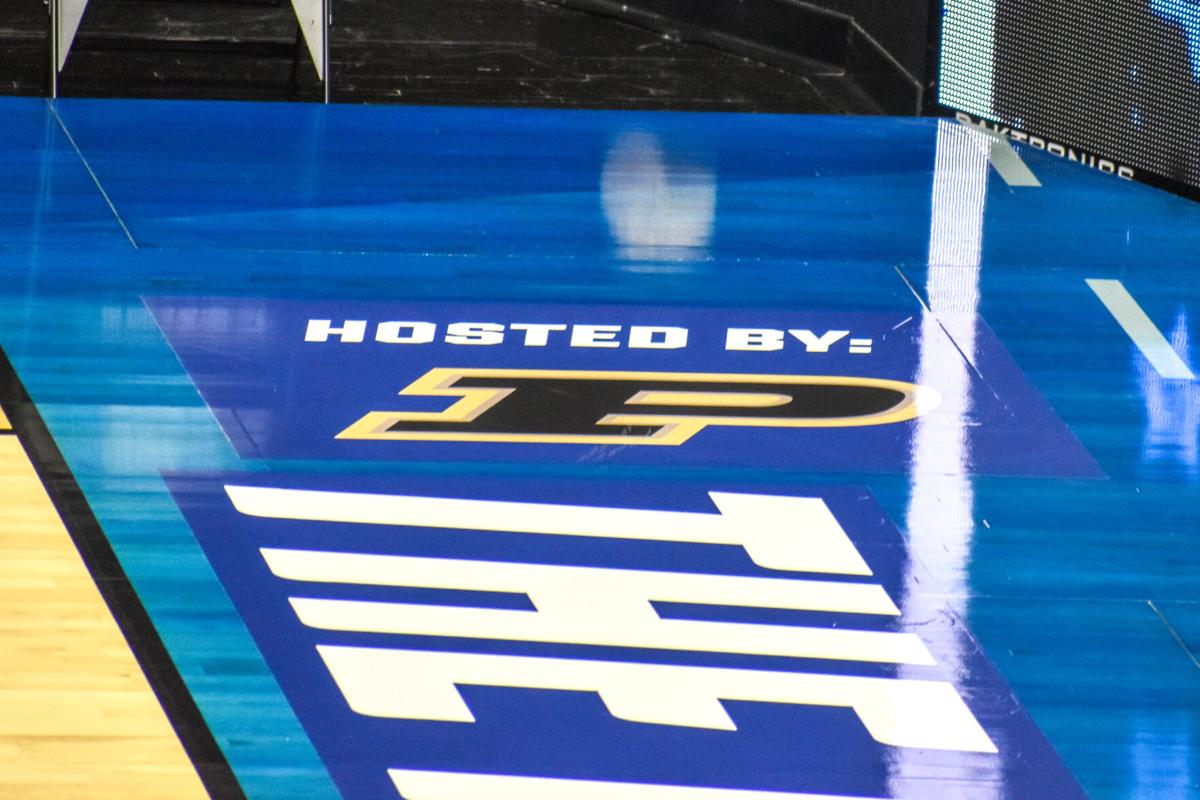 Small Motion P logos sit at each baseline to acknowledge that Purdue is hosting part of the NCAA men's basketball tournament.

For the first time in over a year, Mackey Arena will open its doors to the general public for a basketball game.

Rigorous work was done to prepare the arena for incoming fans from across the country, as well as for millions of viewers watching NCAA tournament games on television. A new floor has been installed, and the most noticeable change to the stadium will be the court’s floor pattern.

In place of the “motion P” Purdue fans are accustomed to seeing at center court, there will be a March Madness logo. The NCAA will allow a Purdue logo to be included in a small section of the court to acknowledge the University as a host.

Associate Strategic Communications Director Ian MacDougall, who was appointed to direct members of the media at Mackey Arena throughout the tournament, said the new logo was placed over the weekend.

“That was a coordinated effort between Purdue Athletics, the NCAA and a group called Indy Sports Corp,” which stages sporting events, MacDougall said in a phone interview. “A lot of the internal efforts came through our event operations group, who really worked incredibly hard over the last couple of weeks to make sure Mackey is prepared to host the Division I men’s basketball tournament.”

There is a protective layer between the two floors to prevent damage to the arena’s traditional wooden floor, he said.

Another facility change is the absence of the cardboard cutouts that filled a portion of the stands during the regular season.

Purdue won’t pay any of the expenses associated with the tournament, MacDougall said. He added that the NCAA will shoulder the cost for all alterations to Mackey. MacDougall did not know the exact cost of the court installation.

COVID-19 precautions will remain in place for the entirety of the tournament. The NCAA expects fans to remain physically distant and wear masks when they’re inside any tournament venues. There will also be a clear-bag policy and metal detectors set up at entrances to Mackey.

“For the six tournament games at Mackey Arena, there will be about 1,400 fans in attendance for each game,” MacDougall said. “We took those out to ensure that fans could adhere to the Protect Purdue guidelines, and guidelines issued by Indiana and Tippecanoe County health departments.”

In January, the NCAA announced that the entire the 2021 men’s basketball tournament would be held in the state of Indiana. The league later said venues could allow fan attendance up to 25% of an arena’s capacity.

Mackey is one of six venues and will operate around 12% capacity. The others include Assembly Hall in Bloomington, and Bankers Life Fieldhouse, Hinkle Fieldhouse, Indiana Farmers Coliseum and Lucas Oil Stadium in Indianapolis.

Teams playing at Mackey will likely bus players straight from Indianapolis to Mackey to play games, which reduces their virus-exposure risk among the Purdue community.

Mackey will host two First Four games and four matchups in the round of 64. Some of the teams playing at the venue include Big Ten foes Michigan State, Ohio State, Michigan, Wisconsin and Maryland.

“Everybody at Purdue Athletics is really excited to be a part of this,” MacDougall said. “West Lafayette and Mackey Arena is such an important place when it comes to college basketball and it’s a great opportunity to showcase that to the country and also the world.”

Mackey’s first game will begin on Thursday with a play-in game between No. 11-seeds Drake and Wichita State. The game will tip off at 6:27 p.m. EST and air on TBS.

For the first time in over a year, hundreds of fans cheered as a team took to the court in Mackey Arena — though the stands were packed not wi…