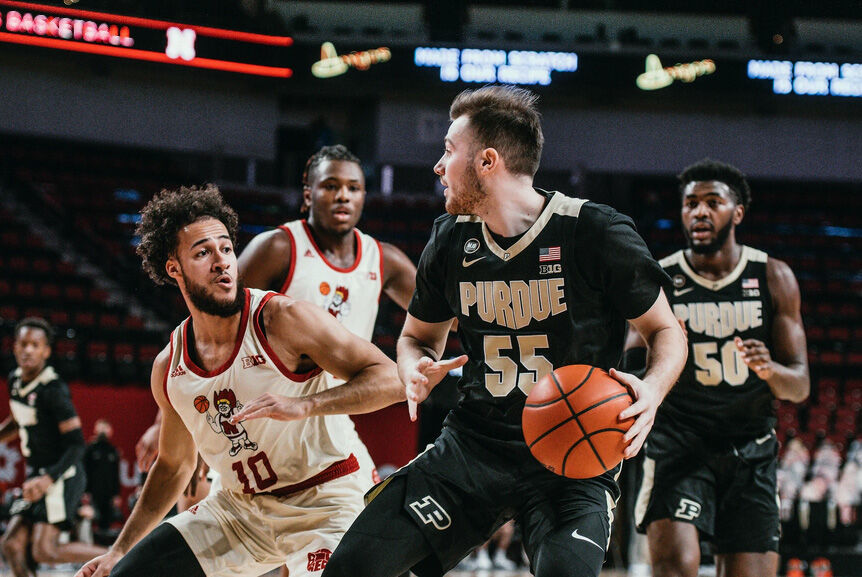 Sasha Stefanovic looks for an open teammate on the baseline as Nebraska's Kobe Webster (10) defends. Stefanovic scored his first points over four games after returning to action from Covid. He scored 14 points on 4 of 8 from the field (all 3-point attempts) and 2 of 2 from the line during Purdue's 75-58 victory at Nebraska on Saturday. 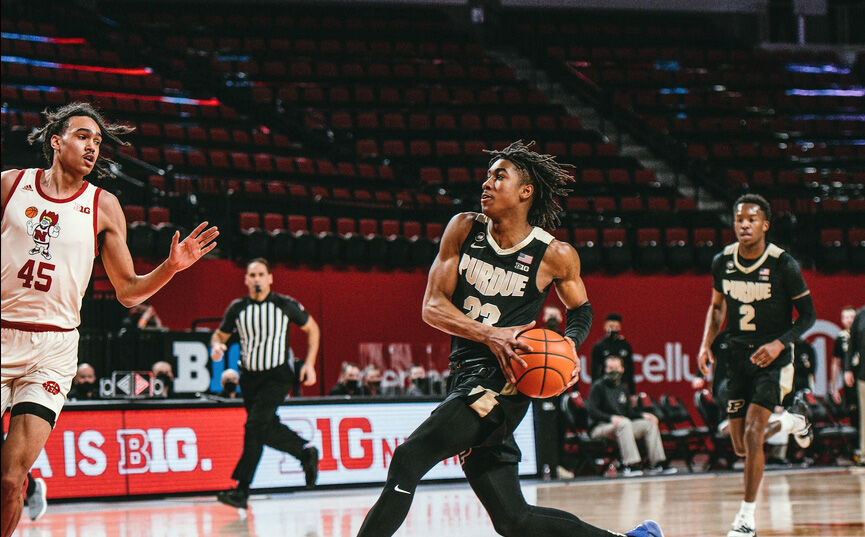 Jaden Ivey starts toward the basket that eventually ended in a layup Saturday at Nebraska. Ivey had a team-best 15 points in 31:43 during Purdue's 75-58 win. Ivey also had 7 rebounds, 4 assists and 3 steals during the victory. 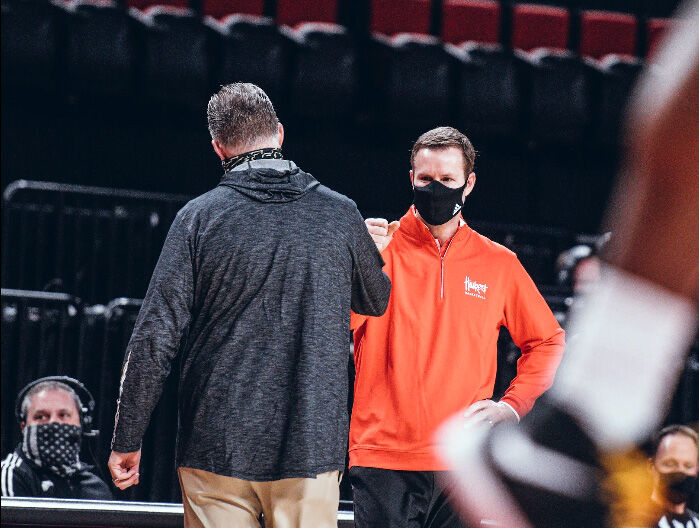 Coaches Matt Painter and Fred Hoiberg exchange greetings prior to the Purdue at Nebraska basketball game on Saturday that the Boilers won, 75-58.

Sasha Stefanovic looks for an open teammate on the baseline as Nebraska's Kobe Webster (10) defends. Stefanovic scored his first points over four games after returning to action from Covid. He scored 14 points on 4 of 8 from the field (all 3-point attempts) and 2 of 2 from the line during Purdue's 75-58 victory at Nebraska on Saturday.

Jaden Ivey starts toward the basket that eventually ended in a layup Saturday at Nebraska. Ivey had a team-best 15 points in 31:43 during Purdue's 75-58 win. Ivey also had 7 rebounds, 4 assists and 3 steals during the victory.

Coaches Matt Painter and Fred Hoiberg exchange greetings prior to the Purdue at Nebraska basketball game on Saturday that the Boilers won, 75-58.

Sasha Stefanovic hadn't made a 3-pointer since Jan. 22, when he was ruled out of Purdue's game against Michigan due to a positive COVID-19 test. Even when he first returned, he appeared shaky and couldn't seem to find his rhythm.

With less than seven minutes in the game, a 3-pointer from junior forward Aaron Wheeler, two straight 3s from Stefanovic and a breakaway layup by freshman guard Jaden Ivey gave Purdue a 13-point lead. It was the team's largest lead and the capper of a 21-4 run over the previous five minutes.

"I was trying to get myself into the rhythm of the game and maybe drive it here or there, but I was wide open," Stefanovic said about his first made 3. "Luckily that one fell and I was able to get rolling from there."

Jaden Ivey scored 15 points in the win against Nebraska.@BoilerBall pic.twitter.com/Y6QKYn0vX4

The team used that momentum to dispatch, with some difficulty, a Nebraska team coming off a month-long COVID-19 pause and playing its eighth game in 15 days Saturday night. In a final score that does not reflect the early back-and-forth nature of the game, Purdue won 75-58 on the road.

Boilermaker fans who have seen the heights this team can reach expected this outcome, but feared it would not come to pass based on the Boilermakers' low points.

In what has become a typical showing for this Purdue team, the Boilermakers (15-8, 10-6 Big Ten) gave fans plenty of reasons to anticipate both a disappointing loss and stunning win for most of the game. From monster dunks by star freshmen and aggressive defensive play to soul-crushing shooting droughts and inopportune Husker (5-15, 1-12) scoring runs, this game featured everything that has defined Boiler basketball this season.

Every time Purdue appeared to pull away through the first 30 minutes, reaching leads of 8, 9 or 11 points, its shooting would suddenly go dry, or Nebraska would steal a few possessions and convert them to narrow the gap back down to an uncomfortable margin.

But then junior forward Trevion Williams would come through with a hook shot, or an and-1 and remind the team of the things it can do. The freshmen would turn that energy into buckets, and Purdue would start the cycle all over again.

And then the flood gates opened with Wheeler and Stefanovic's shooting, and Purdue finally broke the cycle and definitively put the game away.

Nebraska's offense went cold, Purdue's Sasha Stefanovic heated up, and the Boilermakers used a big second-half run to pull away from a largely pesky #Huskers' team that got big runs out of its reserves.Quick reaction from @HuskerExtraCB: https://t.co/jr3bBem21v

Williams finished the game with 9 points on 4-for-8 shooting, and Purdue's freshmen contributed 36 points on their own, featuring a set of highlight-reel dunks from Ivey, guard Brandon Newman and center Zach Edey.

Ivey once again emerged as a force to be reckoned with, contributing 15 points, energetic ball movement and a statement rebound dunk to close out the first half.

"Sometimes I see where the ball's gonna go and if I can try to get a rebound or a put-back I'll go get it, and that was just the perfect opportunity," Ivey said about the dunk. "It was just a great play and it was just a great read."

Purdue tried to stem the bleeding during its droughts with aggressive, physical defense. The Boilers ended the game with eight steals, four blocks, 48 rebounds and 11 Husker turnovers. On the other edge of that sword, the Boilers committed 14 personal fouls.

Purdue returns to the court Feb. 26 against Penn State in University Park, Pennsylvania. The game will tip off at 7 p.m. and air on FS1.

The Purdue men's basketball team encountered some shooting trouble against Nebraska, and holds a slim lead at the half.

The Boilermakers are up 40-37 in Lincoln, Nebraska, playing a Huskers team on its eighth game since Feb. 6. At one point early in the half, Purdue led 12-4, and earned some strong offensive momentum from a pair of monster dunks from freshman guard Jaden Ivey and freshman center Zach Edey.

That spark left the Boilermakers quickly though, as they suddenly lapsed into a scoring drought and allowed Nebraska to pull ahead with a barrage of 3-point shooting. Purdue wouldn't get the lead back above two possessions until a dunk from redshirt freshman guard Brandon Newman put them 5 points up.

Purdue was shooting 10-for-24 from the field and 2-for-10 from the 3-point arc around the 10-minute mark, continuing its trend of early offensive inefficiency. Edey led the team at that point with 6 points, all scored within 10 feet of the basket.

The Boilers' saving grace has come on the other side of the ball. Purdue is hounding Nebraska in transition and on defense, playing physically and aggressively to limit Nebraska's time of possession. The Boilers have five steals, three blocks and have forced seven Husker turnovers. They also narrowly out-rebounded Nebraska 21 to 18.

The team was also helped by Nebraska matching its shooting inefficiency for the most part, which has kept the game from sliding too far out of reach during Purdue's cold spells.

Down the stretch, Purdue seemed to regain some life in its shooting, getting the lead back into a comfortable range and continuing to bully Nebraska out of scoring opportunities. The team finished the half at 16-for-32 shooting from the field and 5-for-15 3-point efficiency.