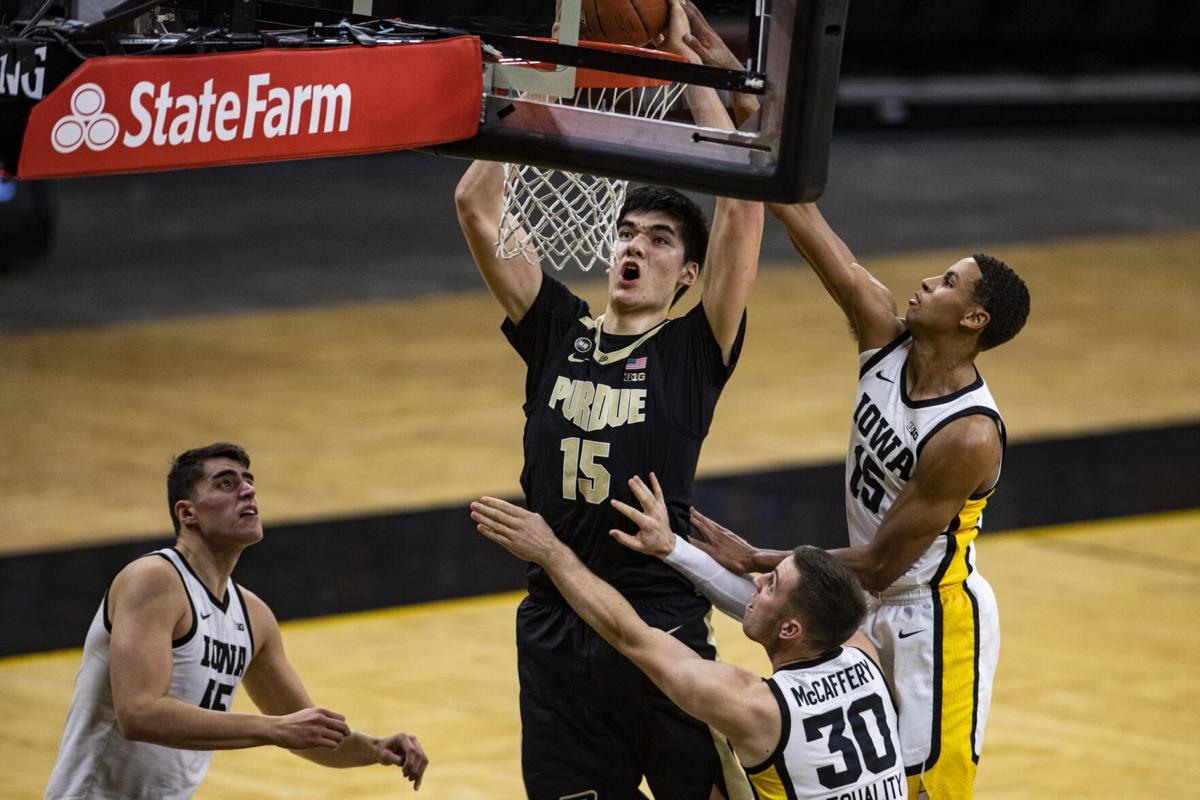 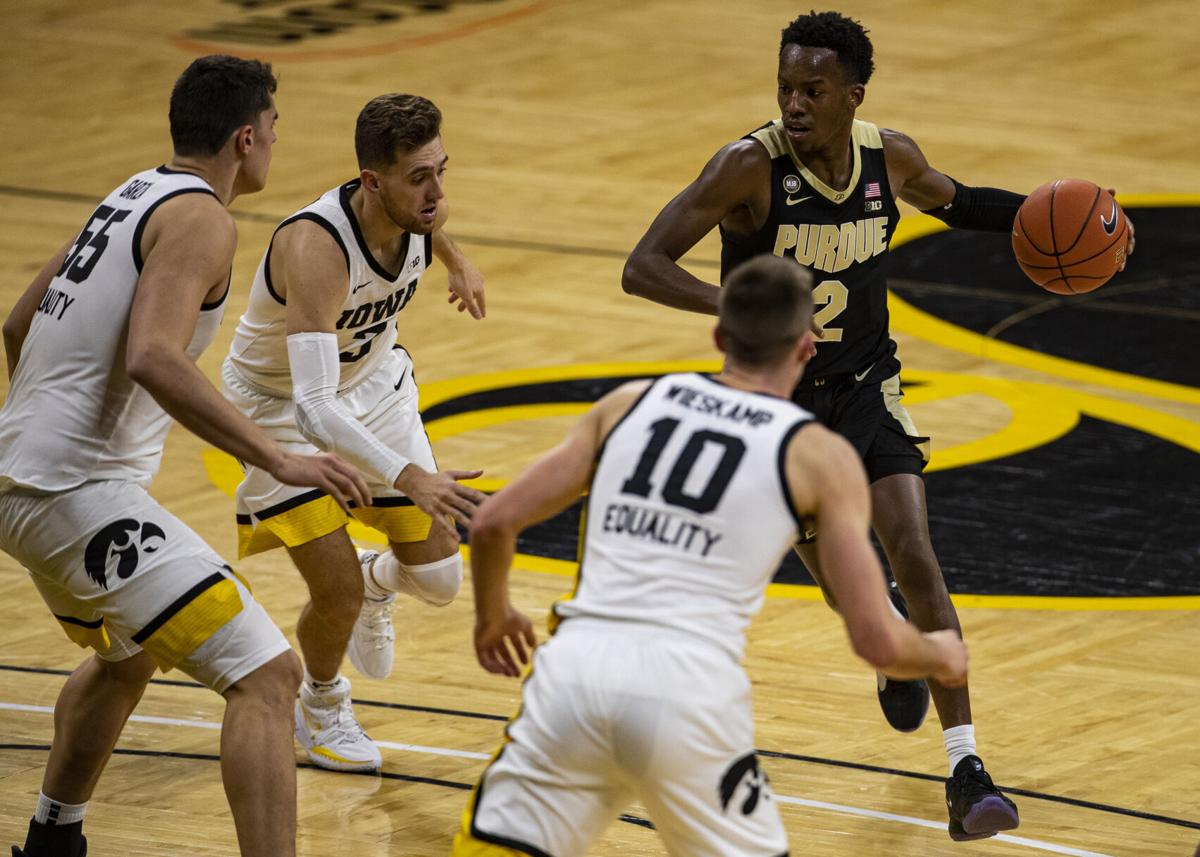 Junior guard Eric Hunter, Jr. is met with a slew of Hawkeye defenders at the top of the key. Hunter scored 4 points and 5 assists as No. 4 Iowa beat visiting Purdue, 70-55, Tuesday night.

Junior guard Eric Hunter, Jr. is met with a slew of Hawkeye defenders at the top of the key. Hunter scored 4 points and 5 assists as No. 4 Iowa beat visiting Purdue, 70-55, Tuesday night.

IOWA CITY – The No. 4 Iowa Hawkeyes were able to build upon their 10-point halftime lead to beat the Boilers, 70-55, with a flurry of extra offense on Tuesday night.

Though Purdue (6-3, 1-1 Big Ten) was able to find some answers to strengthen its interior defense, more foul calls against the Boilers allowed for the Hawkeyes to build their lead from the foul line. The Boilers had 16 personal fouls called against them; Iowa had 10.

Iowa center Luka Garza commanded the floor for the Hawkeyes, scoring 22 points and pulling in nine rebounds. Garza was not only successful from below the basket, but he shot 4-8 from the 3-point line as well.

"(Garza) is a fantastic player," Purdue Coach Matt Painter said. "He's a super player. I love seeing guys develop, improve, and work hard. I think he has a bright future in basketball."

Purdue was unable to find consistency from 3-point distance after trying to find an answer for its offensive struggles. By contrast, Iowa found ways to stretch the floor with multiple guards out on the floor, hitting 38% of its attempts in the second half.

"It's not all about just shooting the basketball," Painter said. "It's about generating a good shot and then get to our shooting. There's some silver linings that we had today, but if we had some of those missed possessions back, we would put ourselves in a better position."

Junior forward Trevion Williams provided the Boilers with a larger inside presence when it mattered, grabbing 5 total offensive rebounds and working on Iowa bigs in the post for 14 points.

"I think overall, I did ok, but it wasn't enough," Williams said. "I always feel like I can get more. But it's not about me. It's about (the team).

"We have to be good defensively together. I can always get better, and we can always be better."

Painter talked about working through some of his team's struggles with better decision making. He stressed the importance of taking efficient shots and having his team's leaders step up on offense when they need them the most.

"Somebody has to be efficient," Painter said. "If we're going to come and knock off a team like Iowa, we had to make better decisions and be more efficient. I thought (freshman guard Brandon Newman) did a great job, but we all have to be better, including me."

Freshman guard Jaden Ivey exited the game after falling hard from going up for a loose ball. Ivey took a shoulder to the face and had a foul called against him for the collision. He did not return to play.

After a hot start from senior center Luka Garza in nine minutes of play, the Hawkeyes lead the Boilermakers by ten at the half.

Garza has been a major factor in the paint for the Hawkeyes (6-1), scoring 8 points from the paint and the foul line while grinding down Purdue's bigs in the post. Garza has also dominated the boards, grabbing seven rebounds.

While both teams attempted to spread out the offense and work outside of their talented bigs in the post, neither team has found a consistent rhythm outside of the paint. The Boilermakers (6-2, 1-0 Big Ten) have made four of their 14 3-point shots, and Iowa has hit six of 18.

Iowa's size and aggressiveness on both sides of the floor with Garza and sophomore forward Jack Nunge in the lineup caused a slew of errors for Purdue's younger roster. Purdue committed up 11 fouls in the first half compared to Iowa's six.

Junior forward Trevion Williams leads the Boilers in scoring with 6 points on a 43% field goal percentage.