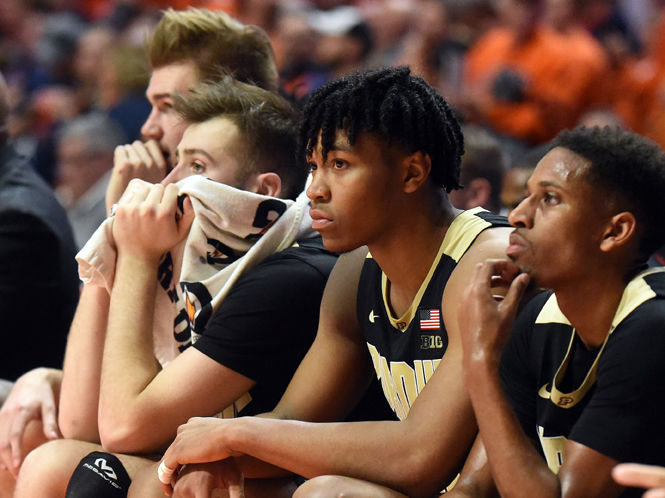 Matt Haarms, Sasha Stefanovic and Nojel Eastern stare at action on the court in disbelief as Illinois dismantled the Boilers, 63-37, Sunday in Champaign. 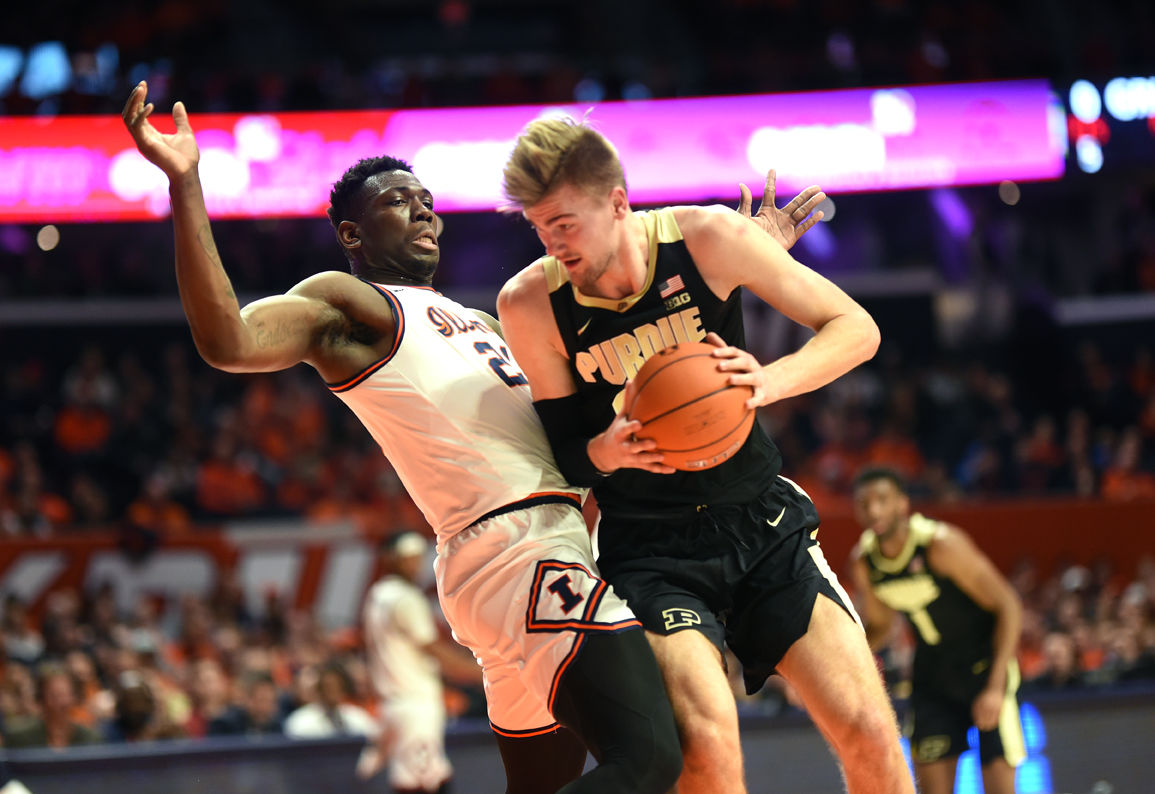 Matt Haarms drives the ball against Illinois on Sunday night.

Matt Haarms, Sasha Stefanovic and Nojel Eastern stare at action on the court in disbelief as Illinois dismantled the Boilers, 63-37, Sunday in Champaign.

Matt Haarms drives the ball against Illinois on Sunday night.

CHAMPAIGN, Illinois  – When you don’t score at least a point a minute, you know your team is in trouble.

The Boilermakers were dismal shooting the ball. They were 15 of 60, a meager 25 percent. That was the worst shooting performance in history. Ever.

Illinois started the game 11-0 and Purdue’s first point came from a Matt Haarms’ free throw, and a sign of the game, he missed the second.

By halftime, the score was Illinois 32, Purdue 19. The Boilers were able to cut the lead to 9 twice in the second half. After trailing by 13 at the break, Illinois extended the lead to 16 – 39-23 – on a two-point basket by Ayo Dosunmu with 17:00 remaining in the game.

But Purdue staged a mini comeback and on a fast-break two-pointer by Eric Hunter, Jr. the margin dropped to 39-30 with just under 14 minutes to go. Illinois Trent Frazier made a layup to regain an 11-point lead with 13:23 remaining, but Nojel Eastern was fouled by Alan Griffin and Eastern made two free throws. That trimmed the lead to 9 once again, 41-32.

Statistics can give a wrong impression. Sunday the statistics were gospel.

• Illinois had 17 second-chance points to Purdue’s 5.

• Purdue had 13 turnovers while Illinois had 8.

“The frustrating piece is that you don’t make free throws and you don’t make layups and now you are allowing second-chance opportunities. So if you look at their score and you limit their second-chance opportunities our defense wasn’t that bad. And then our morale just drops when you are missing some point-blank layups and free throws and things of that nature.”

No Purdue player scored in double figures, but Sasha Stefanovic was the leading scorer with eight. Illinois had three players score in double figures led by Alan Griffin with 16 points off the bench. He was joined by Kofi Cockburn and Trent Fraizer with 12 each.

Painter said it was Illinois that looked like an NCAA Tournament team on Sunday, not his.

Painter credited Illinois reserve player Griffin as a key figure in the game Sunday. Griffin led the team in scoring, despite playing 19:48.

“I thought he was great,” Painter said. “He was the best player on the floor. He played harder than everyone else. And those six offensive rebounds he got were huge.”

The Boilermakers return to action at 7 p.m., Thursday when they travel to Michigan. That game will be broadcast on FoxSports1.