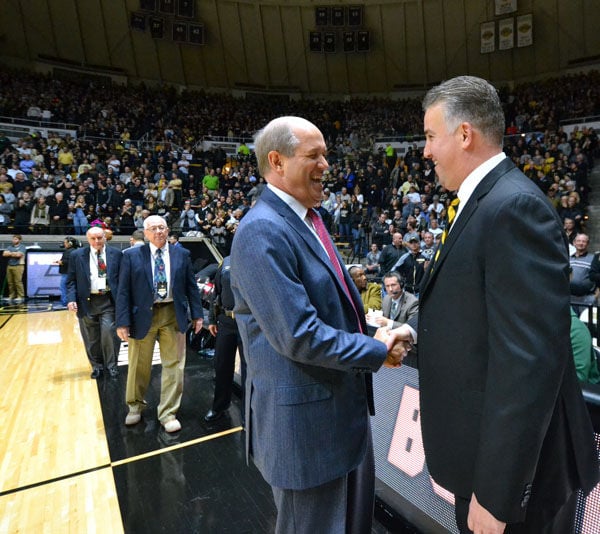 Vanderbilt Coach Kevin Stallings shares a laugh with Purdue's Matt Painter prior to the game on Dec. 22, 2015. Both coaches played at Purdue and were assistants for former Coach Gene Keady, but they did not play or coach together. 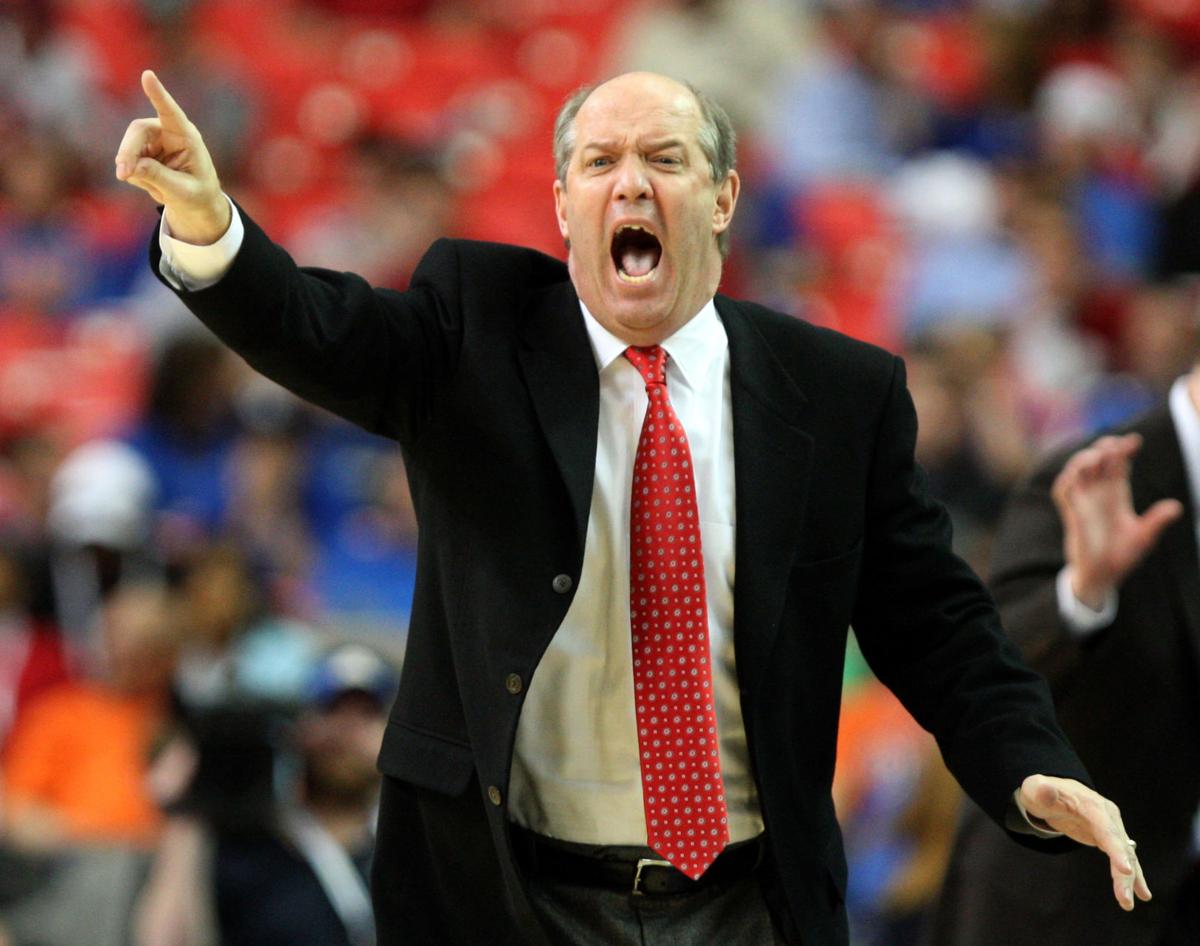 Vanderbilt coach Kevin Stallings yells to player during a semi-final game against Florida in the SEC Tournament at the Georgia Dome in Atlanta, Georgia, Saturday, March 12, 2011. Florida defeated Vanderbilt, 77-66.

Vanderbilt Coach Kevin Stallings shares a laugh with Purdue's Matt Painter prior to the game on Dec. 22, 2015. Both coaches played at Purdue and were assistants for former Coach Gene Keady, but they did not play or coach together.

Vanderbilt coach Kevin Stallings yells to player during a semi-final game against Florida in the SEC Tournament at the Georgia Dome in Atlanta, Georgia, Saturday, March 12, 2011. Florida defeated Vanderbilt, 77-66.

The NCAA placed Pitt's athletic program on three years probation Thursday and issued penalties against the men's basketball and football programs as a result of rules violations -- and cover-ups -- between August 2015 and March 2018.

The violations occurred while Kevin Stallings was basketball coach -- before Jeff Capel was hired -- and while Pat Narduzzi was football coach. Included in the violations were cover-up attempts by both programs that were overstepping restrictions on the use of noncoaching personnel, the NCAA announced in a release.

Narduzzi is approaching his sixth season at Pitt and has a contract that runs through 2024.

Pitt self-reported the violations to the NCAA and cooperated in the investigation and the negotiated resolution.

"Pitt athletics is steadfastly committed to integrity and NCAA rules compliance," Pitt athletic director Heather Lyke said Thursday in a statement. "A reflection of that strong commitment is the fact that, upon discovering these violations, we immediately provided a self-report to the NCAA and began a cooperative and thorough review.

"While disappointed in the violations, I am confident that our already-strong culture of compliance will help each of our programs avoid such situations in the future."

Serious employment restrictions also were placed on Stallings, who is no longer coaching, and former director of basketball operations Dan Cage that would make it difficult for them to return to collegiate athletics.

If he is employed by any NCAA member school over a three-year period, Stallings must be suspended from 30% of his first season.

During that period, any NCAA member school employing Cage must restrict him from any athletically related duties unless it shows cause why the restrictions should not apply. Cage refused to cooperate with NCAA enforcement officials.

Also, Narduzzi must sit out two days of practice when training camp opens in August. Part of his penalty was a ban from participating in one week of off-campus recruiting during the Dec. 1, 2019, through Feb. 1, 2020, contact period.

The negotiated resolution between the NCAA and Pitt -- released Thursday by the NCAA -- details how the violations occurred and how they were discovered by university officials.

The resolution states when Stallings was interviewed by the NCAA, he admitted to the violations, including deletion of practice video from a computer server, and committed them because of a fractured relationship with athletic director Heather Lyke.

In fall 2017, before his second season as coach, Stallings received notice of limitations on the usage of noncoaching personnel.

Yet, Pitt's observations of the program triggered concerns a staff member who wasn't a coach was engaged in illegal coaching activities, including the installation of a new defensive scheme.

Stallings and his staff were given further warning of the rules, and Lyke, who had not hired Stallings, increased monitoring of the program.

Late in the 2017-18 basketball season, Pitt reviewed video but found only one practice on the computer server. That practice was held after Lyke's warnings and confirmed a noncoaching staff member provided instruction not permitted by the NCAA.

Pitt went so far as to employ computer forensics experts to recover practice film that had been removed from the basketball program's computer systems. That search recovered video of several other practice videos that confirmed similar violations over an extended period of time.

The report further states after Stallings believed administrators had become suspicious, he instituted an alert system for when an administrator would approach the practice gym. A team manager, positioned outside the door, sent a warning text message to another manager, who sounded a buzzer.

The football program was drawn into the investigation by Pitt officials and the NCAA after a basketball staff member accused Narduzzi of similar improper use of noncoaching personnel.

Lyke questioned Narduzzi, who admitted he used a quality control staff member for coaching activities over a five-week period near the end of the 2017 season. Those activities included holding play cards for scout-team members and playing catch with players during practice.

"As head coach of the University of Pittsburgh football program, I am wholeheartedly committed to following NCAA rules and preventing these types of issues from happening again," Narduzzi said in a statement.

"I fully recognize my responsibility in what occurred and, equally important, how those missteps will be corrected as we proceed forward."

Part of the cover-up of those activities involved playing music when an athletic administrator was approaching the practice field, the report states.

The NCAA issued a series of penalties and warned Pitt officials those programs will be closely monitored during the probationary period.

Among the penalties, some of which already have been served, are:

--A reduction in men's basketball recruiting days by 17 during the 2017-18 academic year.

--A reduction in the number of men's basketball coaches by one at regular practice for 16 hours during the 2019-20 academic year.

--A reduction in men's basketball athletically related activities hours this spring from 20 to 18 (in-season) and eight to seven (offseason).

--A reduction of athletically related activities for the football program by eight hours and the number of coaches by one for two days of practice during the 2018 season.

--A reduction in the number of football coaches by one for four days of practice in the 2019-20 academic year.

--Two football quality control staff members must be removed from practice for three days during the 2019-20 academic year.