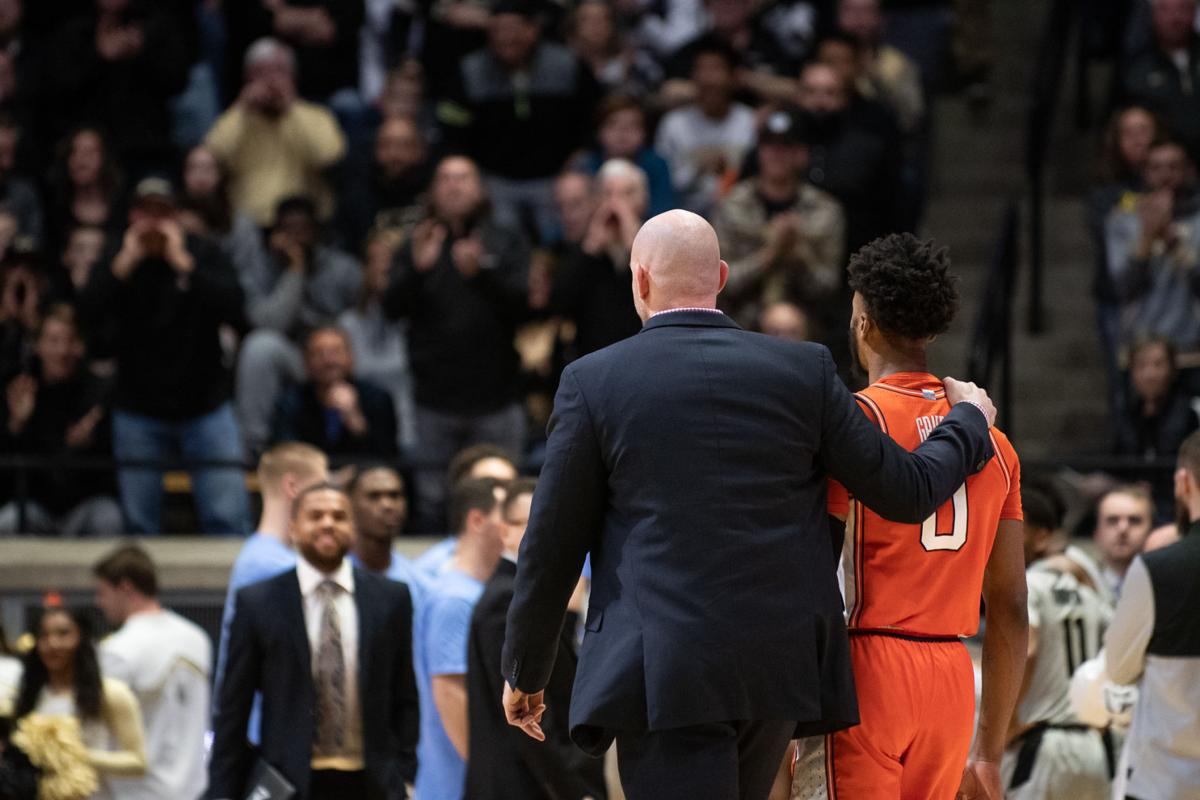 Illinois guard Alan Griffin walks off the court with strength and conditioning coach Adam Fletcher after Griffin was ejected for a flagrant foul in the first half on Tuesday night. He stepped on the chest of Purdue sophomore guard Sasha Stefanovic. 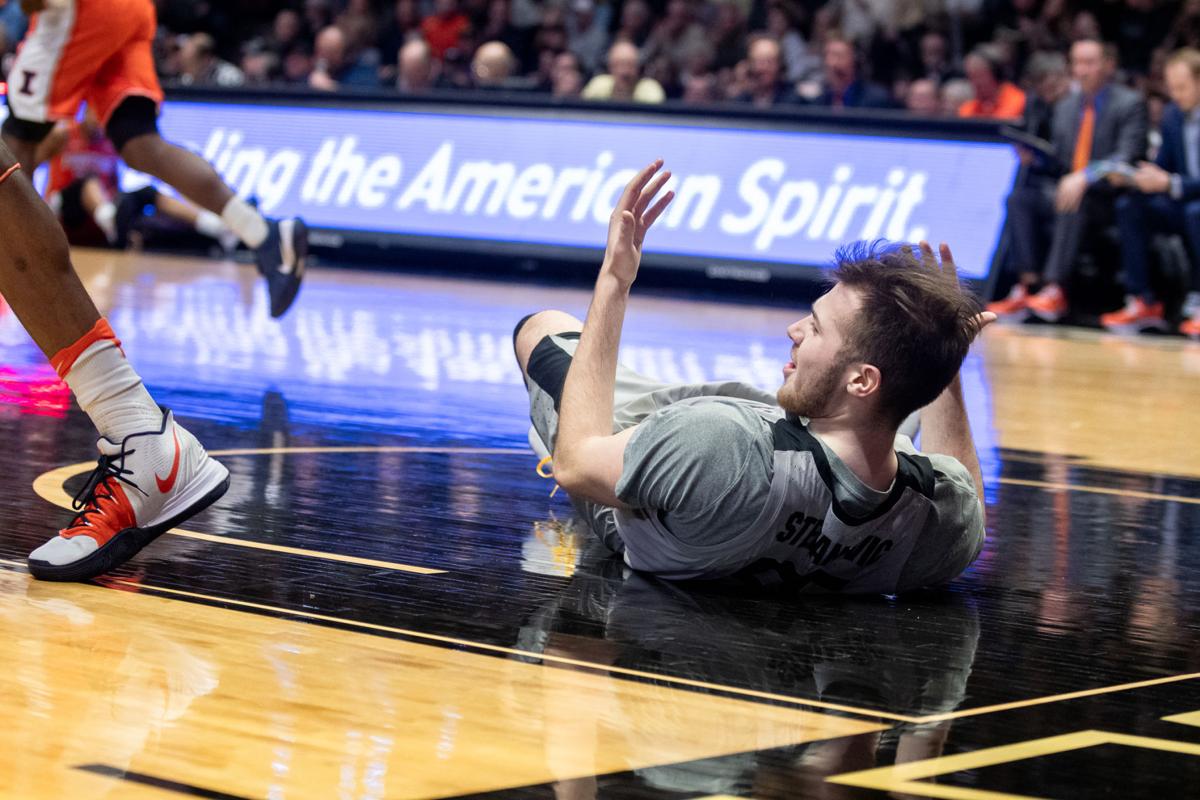 Sophomore guard Sasha Stefanovic raises his hands in frustration after being stepped on by Illinois guard Alan Griffin. After a video review, Griffin was given a flagrant foul and ejected from the game.

Illinois guard Alan Griffin walks off the court with strength and conditioning coach Adam Fletcher after Griffin was ejected for a flagrant foul in the first half on Tuesday night. He stepped on the chest of Purdue sophomore guard Sasha Stefanovic.

Sophomore guard Sasha Stefanovic raises his hands in frustration after being stepped on by Illinois guard Alan Griffin. After a video review, Griffin was given a flagrant foul and ejected from the game.

The Big Ten Conference office announced Thursday that Illinois men’s basketball player Alan Griffin has been suspended two games and issued a public reprimand for violating the Big Ten Sportsmanship Policy after he struck an opposing player near the 12:18 mark of the first half of Tuesday's match against Purdue.

Griffin received a flagrant 2 personal foul from the game officials for his action and was ejected, missing the final 32 minutes of the contest. Griffin is ineligible to play in Illinois’ next two games, on Saturday against Michigan and on Jan. 30 against Minnesota.

"That's just absolutely ridiculous, uncalled for and he should be gone."Illinois' Alan Griffin was ejected after stepping on a Purdue player. pic.twitter.com/LzG9GWqkap

“After a thoughtful and thorough review of this incident, we are all extremely fortunate this did not create a hostile and unsafe environment for the players, coaches, game officials and fans,” Big Ten Commissioner Kevin Warren said in a statement. “It is important for me to emphasize and make it crystal clear that such behavior will not be tolerated, period. We place the utmost importance on the safety and well-being of our players, coaches, game officials and fans. The situation provides a teachable moment for all parties involved, especially our student-athletes as they use their time in the Big Ten to grow as individuals both on and off the field of competition.”

"Alan Griffin is a great young man, and I remain proud of him as a person and as a member of our team. He is a 19-year-old student-athlete who made a mistake — a mistake we don’t condone and that reflects negatively on our program," Underwood told the News Gazette. "He showed poor judgment in a moment of emotion and has been remorseful from the outset, meeting with Sasha Stefanovic after the game to apologize and following with a public apology to Sasha, Coach (Matt) Painter, and the Purdue team.

"He was ejected from the contest and essentially missed the entire game as a consequence of his actions. I am proud of Alan’s accountability, response, and growth from this experience. I feel the further penalty of a two-game suspension is excessive and am disappointed in the timing. But I respect the Big Ten’s decision and am moving on. We will continue to support Alan and help him learn from this situation."

On Wednesday, Griffin took to social media to issue an apology. It read:

"I sincerely apologize for my actions toward Sasha Stefanovic during last night's game," Griffin's note he posted to social media began. "What happened was out of character and does not reflect who I am as a person. Sasha was kind enough to allow me to meet him after the game to offer my apologies.

"To Sasha, Coach Painter, the rest of the Purdue team, my coaches, teammates and Illini Nation, I am deeply sorry that this incident caused a distraction in what was otherwise a great night for our team. I promise to Coach Underwood and my teammates that I will be more mindful in the future."

Before the suspension was announced early Thursday evening, Purdue's  Painter said the issue is in the past. He thought the ejection was adequate.

"He (Griffin) made a mistake, he paid for his penalty, he got kicked out. To me it is what it is," Painter told media earlier Thursday, "but I am not the guy getting stepped on. It’s easy for you when you are not the one who gets stepped on. For our guys I told them not to comment on it, to leave it alone and move on because that wasn’t the story. Sometimes you get lost in the story. The story was that Illinois played harder and played better than Purdue."