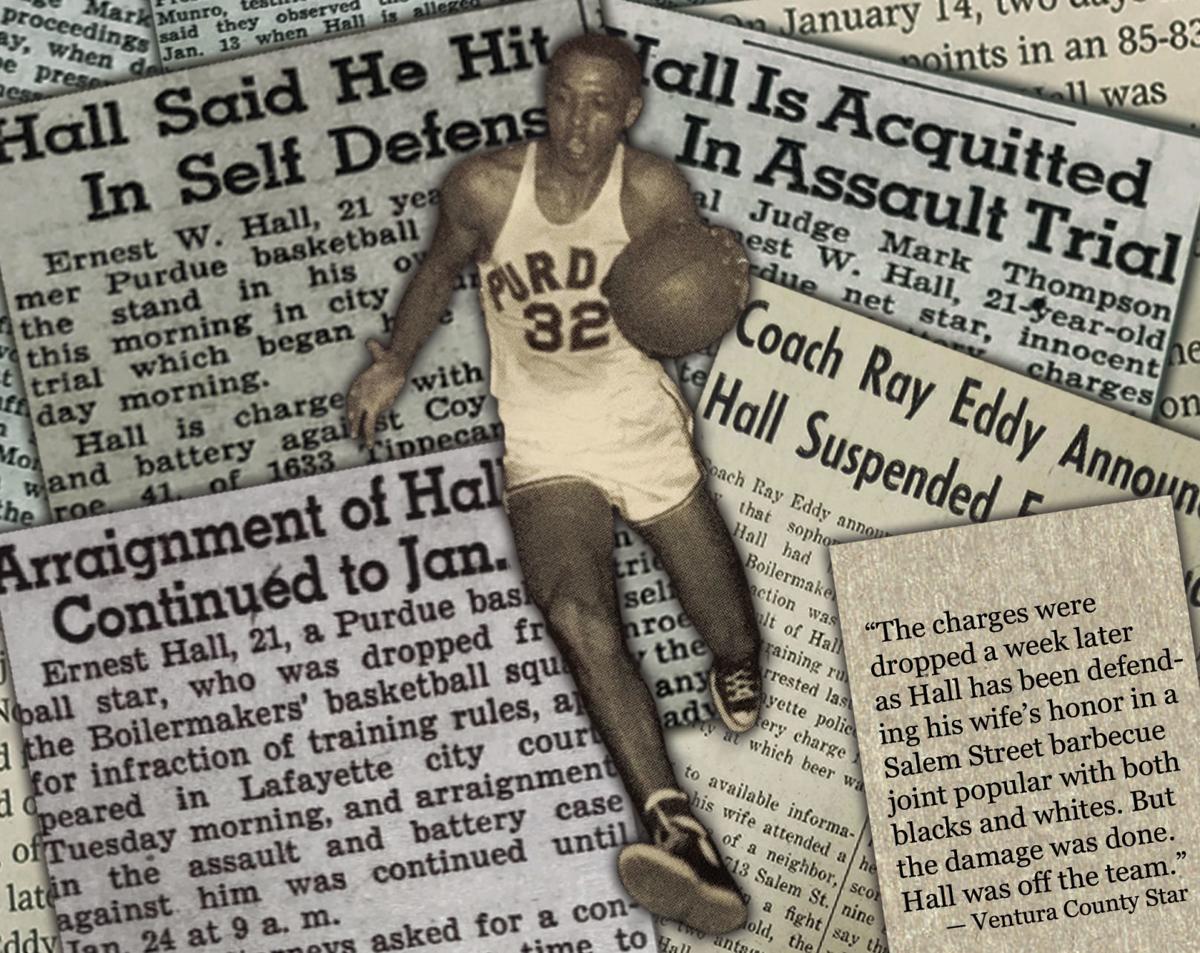 Ernie Hall played in nine games for Purdue before he was expelled from the team after being arrested for assault and battery. Misinformation and a lack of clarity plagued the situation for years to come. 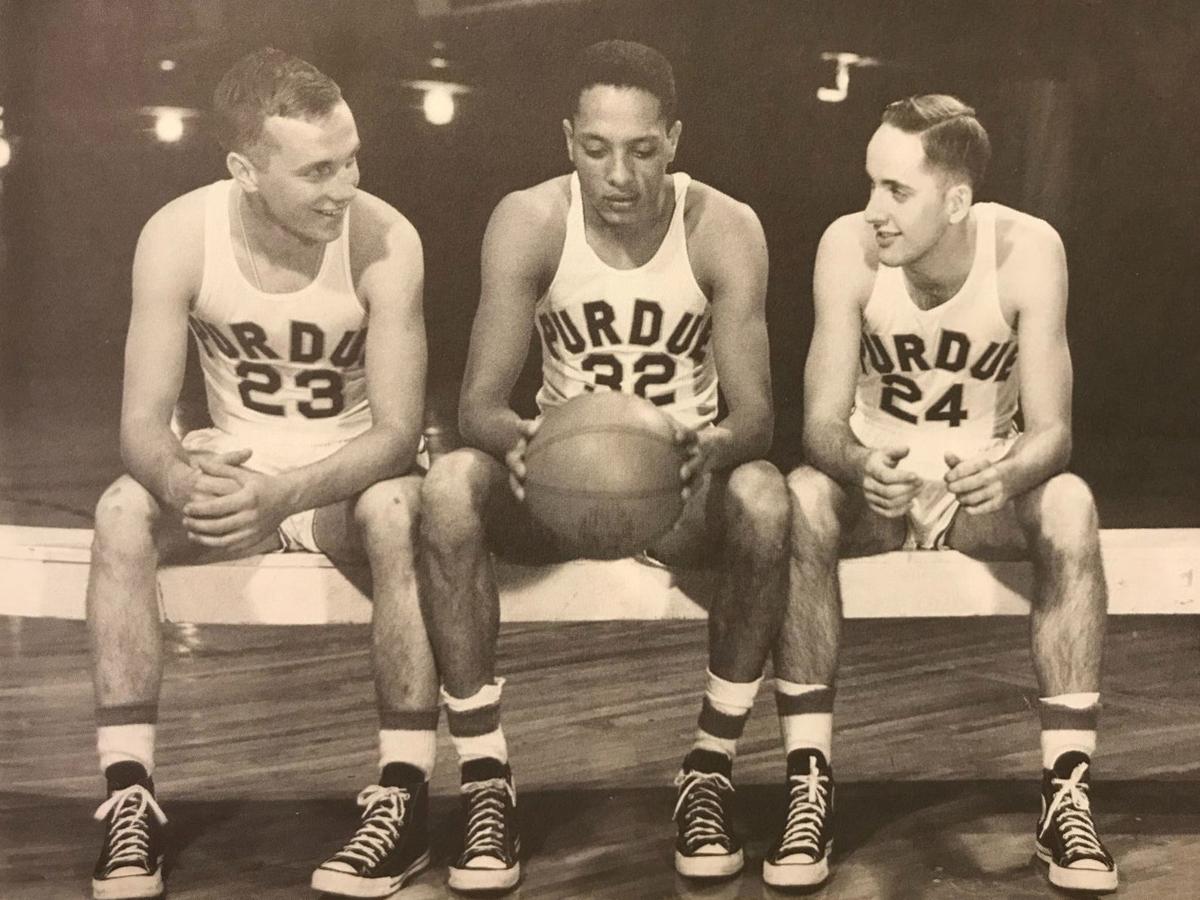 Ernie Hall pictured in "Boilermaker Basketball: Great Purdue Teams and Players," sitting next to Dennis Blind, left, and another teammate. 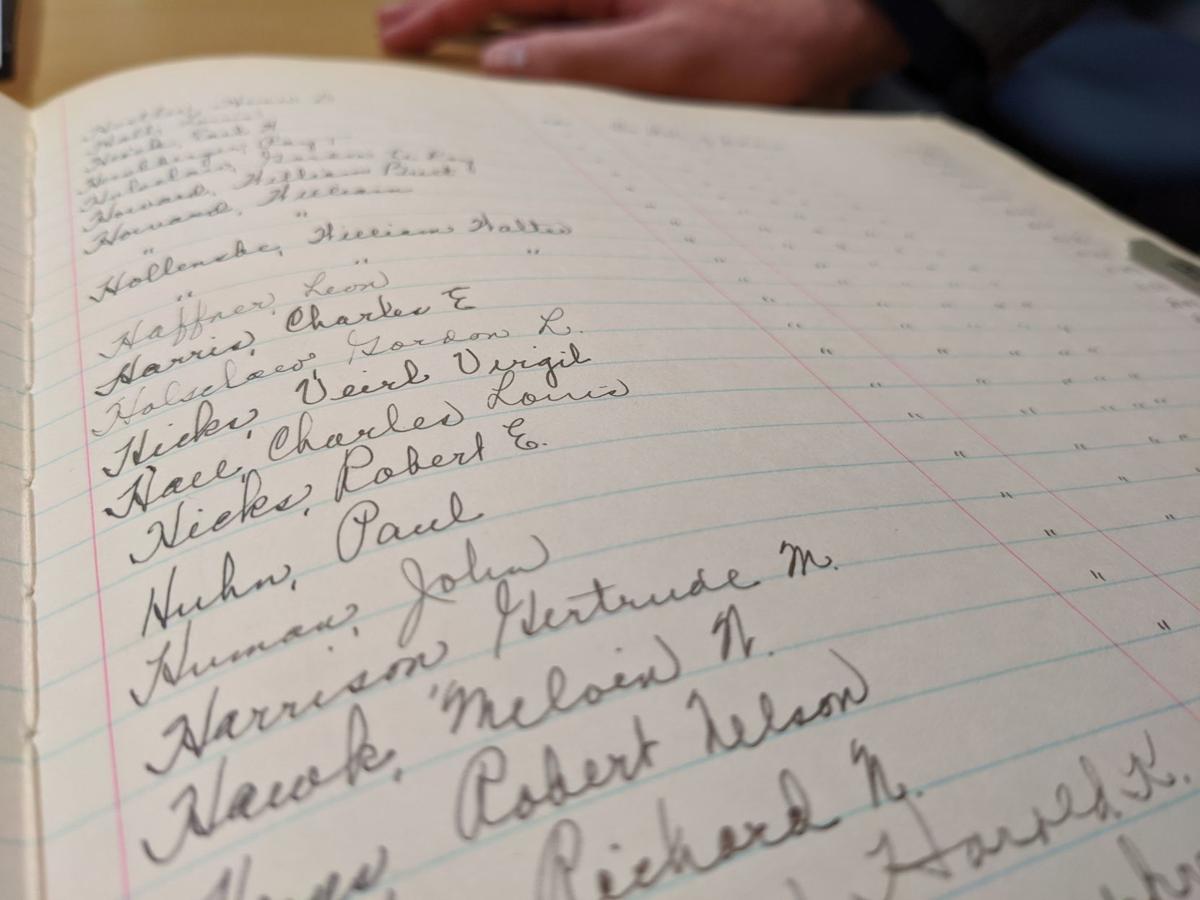 Ernie Hall's case was not included in the index book for criminal and civil cases from the 1950s. 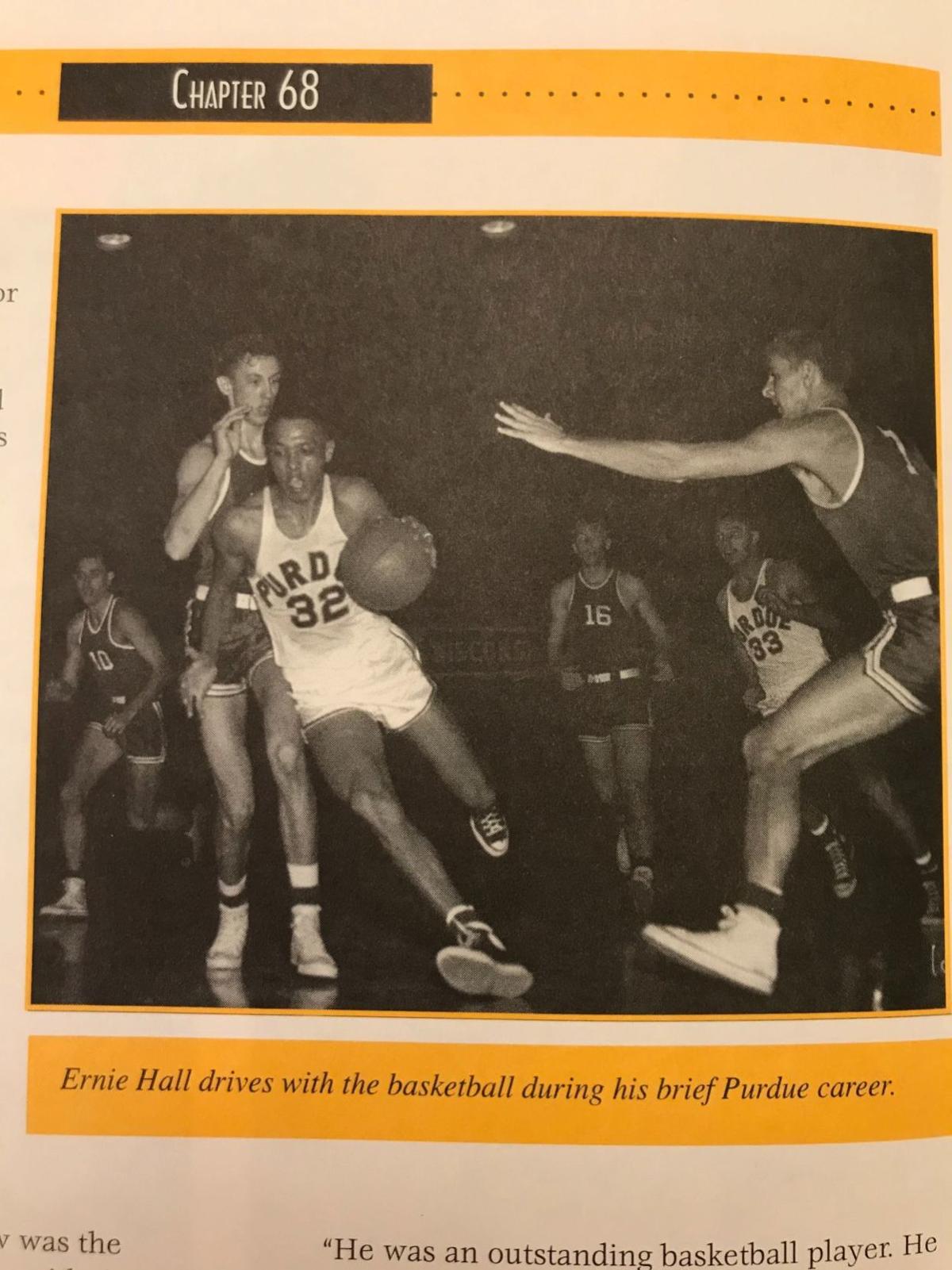 Ernie Hall played in nine games for Purdue before he was expelled from the team after being arrested for assault and battery. Misinformation and a lack of clarity plagued the situation for years to come.

Ernie Hall pictured in "Boilermaker Basketball: Great Purdue Teams and Players," sitting next to Dennis Blind, left, and another teammate.

Ernie Hall's case was not included in the index book for criminal and civil cases from the 1950s.

The ESPN television production of the Purdue vs. Indiana game on Feb. 8 featured a graphic of Lamar Lundy in honor of Black History Month. The commentators hailed him as the first African American to play basketball at Purdue.

But the real story of Purdue’s first black basketball player — the story of a man called Ernie Hall — is far from common knowledge.

Lundy played basketball and football for Purdue in the 1950s, and he was the first African-American athlete to receive a football scholarship from Purdue.

Hall played nine games at Purdue before being kicked off the team and arrested on an assault and battery charge in January 1952, a crime he was later acquitted of. The circumstances of the arrest and eventual aftermath remained unknown to most, including his teammates.

“His environment where he grew up was extremely difficult,” Purdue graduate Richard Bossung said. “It was not a great situation for him.”

Bossung graduated in 1958 and was in high school when Hall came to Purdue.

“He just took (Hall) under his leaf and tried to keep him out of trouble and out of the environment that was not good for him,” Bossung said. “Holladay had someone who worked for him, who drove (Hall) to high school every day and picked him up after practice every day.”

Hall played three seasons of basketball at Lafayette Jefferson and is still among the all-time leading scorers in the school’s history. Regardless of his talent on the basketball court, his race did nothing to aid him in earning either respect or attention from colleges.

Hall expressed confusion and frustration about why Purdue didn’t recruit him out of college, Ken Thompson wrote in “Most Memorable Moments in Purdue Basketball History,” a book published by the Lafayette Journal & Courier in 1998.

Hall instead played two years at Ventura Junior College in California, where he held the school’s single-season scoring record for 37 years. After graduating from Ventura, Hall returned to West Lafayette at the request of Holladay to play at Purdue under second-year coach Ray Eddy.

Hall found success quickly, scoring 32 points in a win over Marquette in his second game as a Boilermaker.

“He was one hell of a great basketball player,” Bossung said. “He could shoot, play defense, block shots, do everything you wanted a big man to do.”

While Bossung said Hall faced prejudice at Lafayette Jefferson, his treatment at Purdue was better than what most would expect in 1950s America.

“I was happy there,” Hall said, according to Thompson’s book. “Everybody treated me great. That whole team, we were like family.”

Dennis Blind, a teammate of Hall’s at Lafayette Jefferson as well as on the 1951-52 Purdue team, said in “Most Memorable Moments in Purdue Basketball History” that the team did not dwell on the “black-white issues.”

“We just accepted him as a great athlete,” Blind said. “(Hall’s race) never even dawned on us.”

Hall’s experience at Purdue began as a mostly positive one, but it was short-lived.

On Jan. 13, 1952, Hall was arrested for assault and battery at a Salem Street house party the night after a game. The Exponent reported that then-20-year-old Hall pulled a knife on then-40-year-old Coy Monroe, but it did not report any further on the case.

Eddy dropped Hall from the basketball team the next day, according to the Exponent story.

While the Journal & Courier never reported the original incident, it was the only paper in the Greater Lafayette area to follow the trial itself. The case began on Feb. 1, 1952, and ended on Feb. 4 with Hall’s acquittal. It was revealed that Monroe approached Hall with a knife — not the other way around — and Hall punched him in self-defense.

Hall was proven innocent but was not allowed to rejoin the team.

Only two newspapers reported on two separate aspects of the situation, and no court documents or arrest papers were saved by the Tippecanoe County Courthouse, the Tippecanoe County Historical Association, West Lafayette City Hall or the West Lafayette Police Department. The Exponent’s original reporting said, “Police say that he has a record of several minor offenses,” but no such records could be found today.

Bossung did recall that Hall had a reputation for trouble, and he said that if he was arrested when he was a minor, there would likely be no documentation of it. If he had a past record of offenses, those offenses would have occurred while he was in high school.

The situation lacked information to the point where even most of his teammates and fans did not know why Hall was removed from the team. Bossung himself was not initially aware Hall was arrested. The only information Eddy gave was a single statement saying, “He broke training rules.”

“It was kind of quiet,” Blind said, according to Thompson’s book. “All we knew was the next day, we were told he was no longer with the team.”

Blind said he did not learn about the true nature of Hall’s removal until decades later.

Joe Curley, a reporter from the Ventura County Star in California, wrote a story about Hall’s career on Oct. 21, 2007 — two weeks after Hall’s death.

His version of the arrest was different from previously mentioned reports.

Curley wrote in his article that the incident that led to Hall’s arrest took place inside a barbecue restaurant on Salem Street, not a house party. He also wrote that the charges were dropped after a week, not that the case was taken to court.

Curley said that a friend of Hall’s told him the barbecue story at Hall’s memorial service in Indiana.

The article also mentioned that Dan Casey, another teammate of Hall’s, blamed Purdue for the entire incident on the basis that Hall and his wife were not provided married student housing on campus.

Details of the story remain murky, and many people are still uninformed.

“Who knows what really happened?” said Alan Karpick, publisher of GoldandBlack Illustrated. “There was some controversy about ... Hall. I don’t know if it was fair or not.”

Some think Hall’s race could have been the main factor in his arrest from the start.

“That wouldn’t surprise me,” Thompson said. “He was a great player, but his race definitely didn’t help him.”

Bossung said Hall often skipped class, and he believes that was also a factor in his removal from the team.

After completing the school year at Purdue, Hall enlisted in the Army for two years, then finished his education and basketball career for one year at California Polytechnic State University.

After he left Purdue, there was little talk about him in West Lafayette, and he did not go out of his way to come back. Curley said Hall never went to a single team reunion, despite being one of the best players on the 1951-52 team.

While Hall told Thompson that he had no hard feelings against Purdue, Curley said he believes his failure to return said otherwise.

“Obviously (Hall) felt it the rest of his life,” Curley said. “He never went back to a basketball court, really.”

After Hall was removed from the team, Blind started in his place. Blind eventually became the first 1,000-point career scorer in Purdue history — a feat that Hall was well on his way to achieving.

Bossung said Hall’s removal made few waves in the community.

“It really was not a real big deal because many people had anticipated (that he wouldn’t make it),” Bossung said. “It just kinda proved a lot of people’s theories that he wasn’t gonna make it because of academic problems and everything else.”

Despite the fleeting nature of his time here, Curley said Hall blazed a trail at Purdue, opening the doors for other black athletes to thrive in an environment that didn’t always readily accept them. In the 1957-58 season, Purdue had three African Americans in its starting five: center Wilson Eisen and guards Willie Merriweather and Harvey Austin.

Hall spent 29 years working for the U.S. Postal Service after college. He died on Oct. 8, 2007, just three days after he was inducted into the Ventura College Athletics Hall of Fame.

Neither Purdue nor Lafayette Jefferson has honored him since his death.

After a story featuring Ernie Hall and his career at Purdue ran on Thursday, The Exponent received multiple emails and phone calls from people…