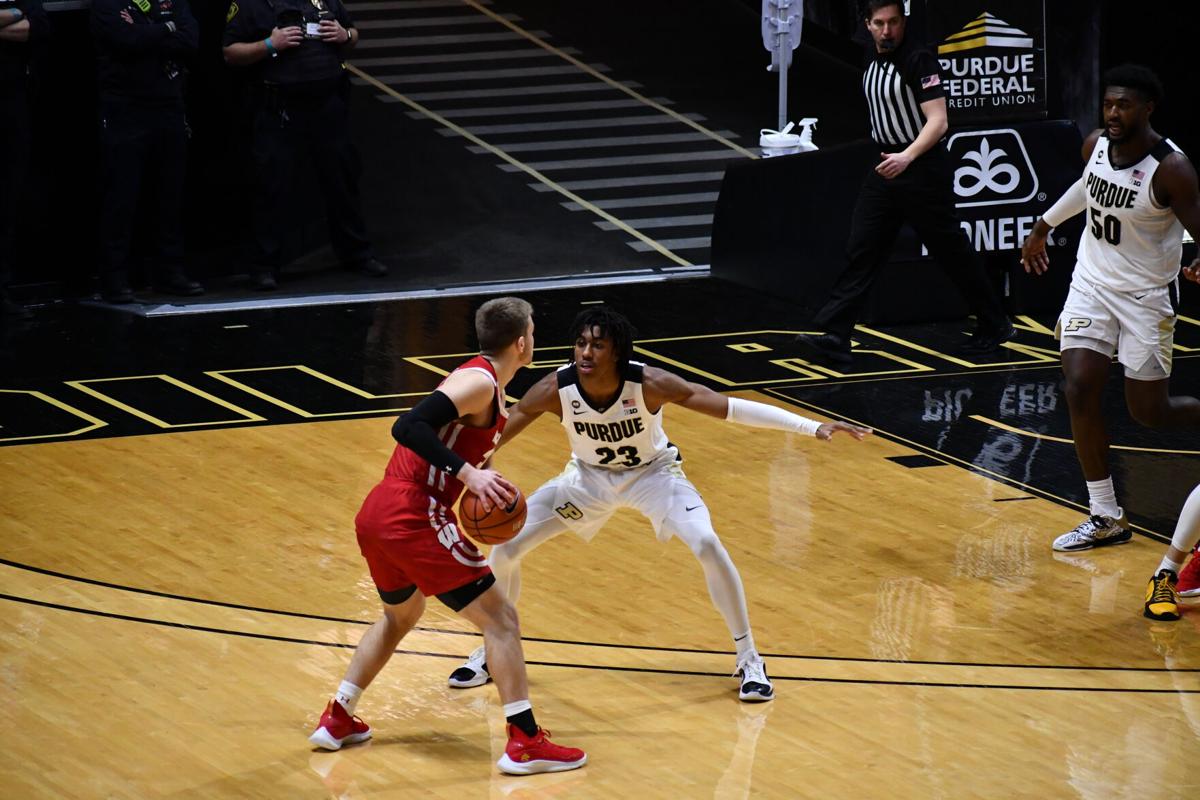 Freshman guard Jaden Ivey guards Wisconsin's Brad Davison early in the first half. Ivey had 18 points on 4 of 9 from the field – including 1 of 4 from 3-point range – and 9 of 10 from the line for 18 points. 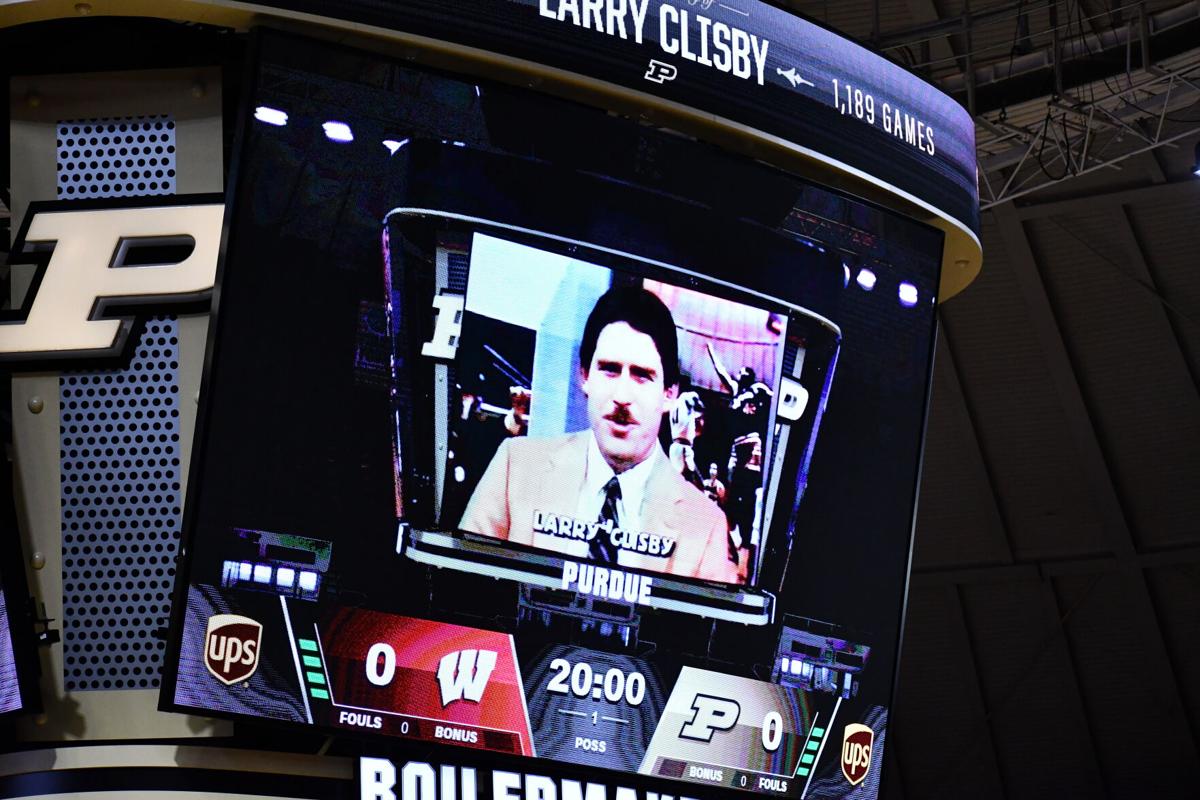 In addition to a yellow rose at his old seat, a video commemorating the late Larry Clisby's career was played before the Wisconsin at Purdue game on Tuesday night. Clisby, the long-time play-by-play announcer, died over the weekend.

Seven lead changes and nine ties later, the No. 23 Purdue Boilermakers came out on top in a tense game.

Imagine a 7'4" center with footwork.That's @zach_edey.Watch as he easily snags this rebound and soon after finishes under the basket with the foul. pic.twitter.com/BugNfgzr6D

Junior forward Trevion Williams put the dagger in the Badgers late in the half with a ferocious dunk to give the Boilermakers a lead they would never relinquish.

Though the Badgers attempted to freeze the clock with a series last-second fouls, sophomore guard Isaiah Thompson was able to sink two clutch free throws to seal the game in its final seconds.

Freshman center Zach Edey dominated Wisconsin down low throughout the whole second half. He finished the game with a career-high 21 points, five of which were from the free-throw line. Freshman guard Jaden Ivey praised him for his game tonight.

"The guy was a beast," Ivey said. "He came with that mentality today and that's what we needed. He stepped up in his role."

Ivey managed to continue his astounding multiple-game scoring run, finishing with 18 points and two assists, which was highlighted by an acrobatic finish at the rim two minutes into the second half.

"There's a lot of this you can't teach."We've seen this up-and-under move before from @IveyJaden. pic.twitter.com/jDhcYD8B0l

Junior forward Aaron Wheeler found his rhythm from 3-point range during this game, shooting a perfect 3 for 3, including a clutch shot with five minutes left in the game. This is a welcome sight for the Boilermakers, as he has been noticeably struggling with his shot throughout the whole season.

"Shooting confidently is the big part," Wheeler said. "Throughout the season, knowing I'm still going to get those opportunities for the open shots and being able to take it is the biggest thing."

The Purdue team, coach Matt Painter and the families in attendance were upset over foul calls during the second half. A chorus of boos could be heard over the piped-in fan noise after a shooting foul call on Trevion Williams midway through the second half.

It was a departure from the eerie quiet of an almost empty Mackey Arena.

Williams picked up his fourth personal foul with 10 minutes left in the game, which led to Purdue's reliance on Edey. Despite his foul trouble, Williams still finished with 9 points and seven rebounds.

Purdue returns to action at 2 p.m., Saturday when it hosts Indiana (12-13, 7-10). The game will be broadcast on an ESPN Network channel yet to be announced.

They always say that basketball is a game of runs.

Purdue's offense had a slew of miscues through the first seven minutes of the half, only hitting two shots from the field and turning the ball over four times, creating a 13-5 deficit for the Boilers.

Purdue followed up with a 10-2 run, fueled by many Wisconsin mistakes and brilliant playmaking by junior guard Sasha Stefanovic to draw even with the Badgers with eight minutes left in the half.

Freshman guard Jaden Ivey was all over the court once again, scoring 8 points to keep the Boilermakers within shouting distance of the Badgers during the slow start. He made a key chase-down block to keep the score within 10 points early in the half.

Purdue took the lead with about seven minutes left in the half and maintained it throughout the rest of the period. There was a noticeable effort to push the ball inside to keep the lead intact, as freshman center Zach Edey scored all of his 7 points during this stretch.

The bench has given Purdue a spark, as they have scored 14 of their 30 points so far in the game.

A minor collapse in the last two minutes allowed Wisconsin to narrow the lead again, but Purdue held the edge going into the locker room.

Before the game, Purdue paid tribute to longtime announcer Larry Clisby, who died this weekend. Flowers were left at his seat in the broadcast seating, and a tribute video played over the Jumbotron before tipoff.

Forever part of our family. 💛🖤 We love you, Cliz. pic.twitter.com/jsbqk6Nr8p