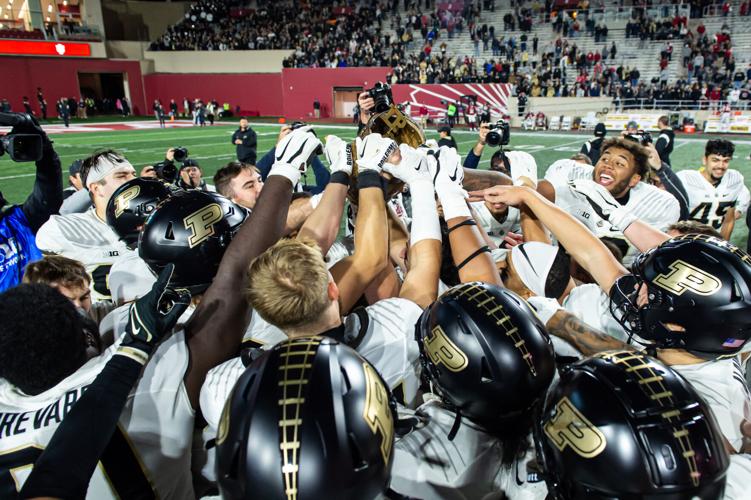 Purdue players reach out to touch the Old Oaken Bucket following their 30-14 win over Indiana on Saturday. 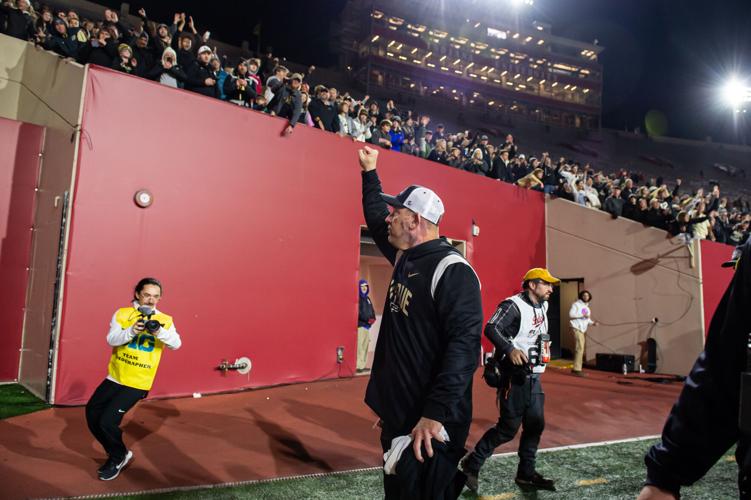 Purdue football head coach Jeff Brohm thanks fans as he walks off the field following Purdue's 30-16 win over Indiana in which Purdue clinched the Big Ten West title. 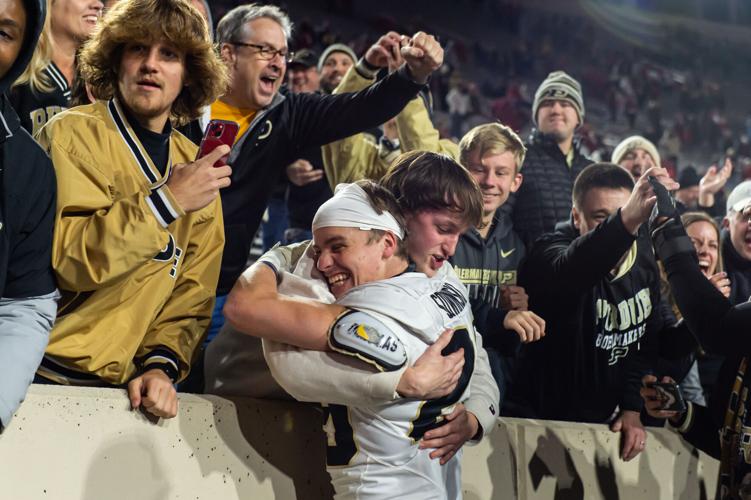 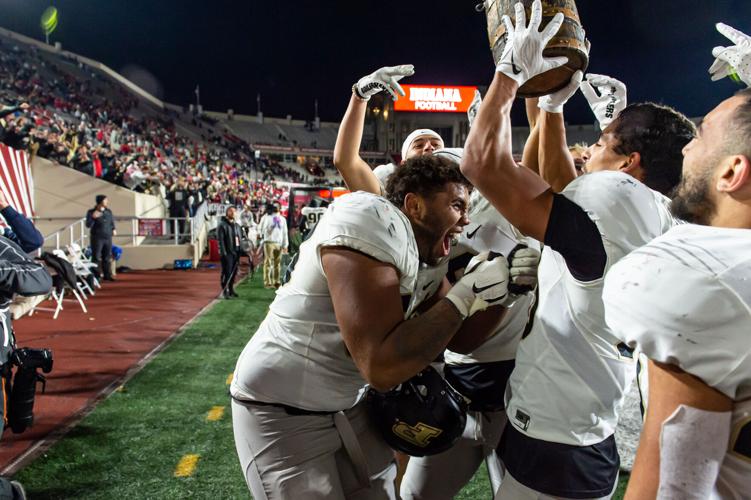 Purdue players reach out to touch the Old Oaken Bucket following their 30-14 win over Indiana on Saturday.

Purdue football head coach Jeff Brohm thanks fans as he walks off the field following Purdue's 30-16 win over Indiana in which Purdue clinched the Big Ten West title.

Their victory over Indiana, paired with Nebraska's win over Iowa, earned them a spot in the conference championship at Lucas Oil Stadium this coming weekend in the Big Ten Conference Championship Game.

The Boilermakers won their division as they simultaneously claimed the Old Oaken Bucket, their rivalry game.

During rivalry weekend, the highly anticipated regular-season finale between Purdue and Indiana is always met with a great deal of enthusiasm from both sides of the contest.

Although Saturday's game was hosted at Indiana’s home arena, both opponents were backed by their supporters during the game.

Memorial Stadium is a 2-hour drive from West Lafayette, but that didn’t stop Purdue fans from breaking up the rival sea of cream and crimson with islands of black and gold. The turnout and enthusiasm from Purdue fans showing up was significant, as was the roar of “IU Sucks” that could be heard echoing throughout the arena on every kickoff.

“This game means a lot to our fans and to our university, and there’s a lot of pride in it," head coach Jeff Brohm said. "Without question, winning this game alone is a great feeling."

But Purdue was also competing for a season-defining award as well, since heading into rivalry weekend, Purdue stood tied with Iowa for No. 1 in the Big Ten West.

IU was the only thing standing between the Boilermakers and the first Big Ten Championship game in program history.

Indiana had just broken its losing streak and was coming off of an upset win against Michigan State. Between the momentum of that victory and the Hoosiers playing on their home turf, the boilermakers didn't expect the upcoming game to be an easy win.

When asked before the game about his opinion on its potential outcome, sixth-year quarterback Aidan O'Connell said that the unpredictability of the season made it anyone's game.

“Any weekend you can be beat by any team," he said. "Just because a team’s record is this, and yours is this…It’s Big Ten football. Anybody can beat anybody.”

Things were going well in the first half for the Hoosiers. Indiana controlled time of possession, having the ball for over 20 minutes and recording 166 yards. Purdue’s defense held the Hoosiers to only a touchdown, but the Boilermakers still trailed 7-3 at halftime.

Brohm said he encouraged the team during halftime to “continue to battle,” and the Boilermakers emerged from the locker room doing so. He changed some of the formations and splits offensively to throw the Hoosiers off their game, and Purdue’s defense continued to keep IU from scoring, almost keeping them off the board for the last three quarters until a touchdown as time expired in the game.

Before the Hoosiers could see what was coming, a slew of big plays down the field set the tone and completely changed the momentum for the second half.

O’Connell threw for 290 yards and two touchdowns, including a 60-yard touchdown pass to Charlie Jones, who averaged 38.5 yards per reception. On just 15 carries, Devin Mockobee ran for 99 yards and another touchdown. Cory Trice scored the final touchdown on a fumble recovery to nail the Hoosier’s coffin shut.

The final score was 30-16, which made Purdue first in the Big Ten West and the winner of their division.

“It is the ultimate feeling,” Brohm said, proudly wearing his new 2022 West Division Big Ten Champions hat. “You dream about it and you hope that it can happen but it's hard.

"We had a little bit of luck go our way, we understand that, but you know what? We competed every game. We got knocked around a couple weeks in a row, but found a way to bounce out of it and just do enough to win. So that’s just a sign of a great group of guys that want to make a difference to get the championship and now we have the chance to do that.”

Now holding the title of Big Ten West champions, this marks the first time in program history that Purdue will compete in the Big Ten Championship game since the Big Ten adopted the title game in 2011. Purdue will face off against Michigan on Saturday at Lucas Oil Stadium.

In this matchup, the Boilermakers, while still unranked, face off with the No. 2-ranked team in the nation this Saturday.

“(Michigan is) really good, I do know that,” Brohm said, “To go to Columbus and (win), they play great defense, they’ve got a strong running game. Their quarterback is athletic and makes plays. Obviously, they’re in the hunt to win the whole doggone thing. We’ll have more than our hands full.”

But Purdue has proven it can win in this situation in the past.

No unranked team has beat more AP Top 5 teams than Purdue. After defeating No. 2 Iowa and No. 3 Michigan State last season, Purdue football re-upped its national reputation as the “Spoilermakers,” coming in as underdogs and spoiling the record of football giants time and time again.

The Boilermakers are going to Indianapolis to take on No. 2 Michigan. The game will start at 8 p.m. and will be broadcast on Fox.