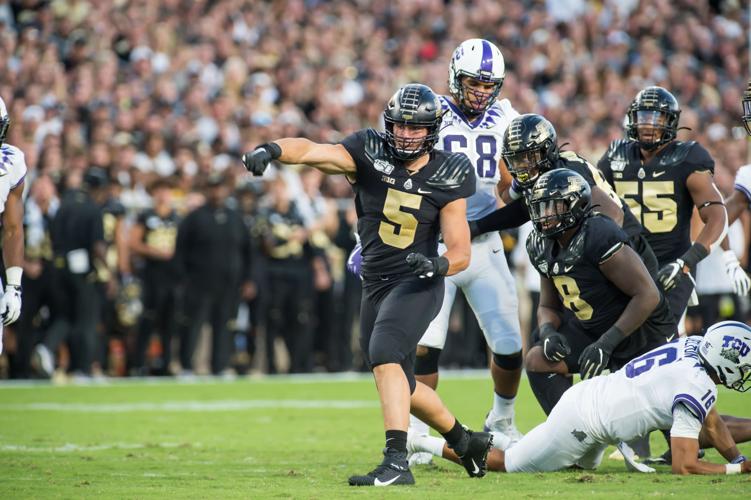 Defensive end George Karlaftis celebrates after a tackle to loss in the first half in a game against TCU. Karlaftis would get an interception the very next play. 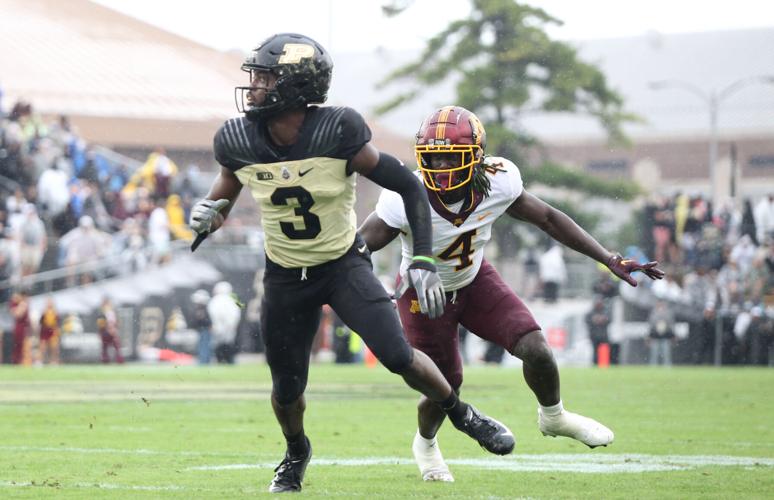 Junior wide-receiver David Bell receives the ball during a game against Minnesota on Oct. 2, 2021.

Defensive end George Karlaftis celebrates after a tackle to loss in the first half in a game against TCU. Karlaftis would get an interception the very next play.

Junior wide-receiver David Bell receives the ball during a game against Minnesota on Oct. 2, 2021.

This year’s draft is likely to be defense-heavy, with tackles like Georgia’s Jordan Davis, edge rushers like Michigan’s Aidan Hutchinson and Oregon’s Kayvon Thibodeaux and linebackers like Georgia’s Nakobe Dean — all projected at the top of the overall class and in the first round of mock drafts across the board.

They all got their chance to perform for NFL scouts and executives at the NFL Combine Saturday afternoon in Lucas Oil Stadium. Junior defensive end George Karlaftis, the fifth-ranked edge rusher in his class, proved he can hang with the best of them.

“Big men, we like to show off our swagger,” 11-year New Orleans Saints defensive end Cam Jordan said in an interview before drills.

The hopeful recruits did just that.

The standout performance of the afternoon came from Davis, one of 11 Bulldogs invited to the combine this year. Coming into the weigh-in at 6-foot-6 and 341 pounds — down 20 pounds from his last weigh-in at Georgia — Davis ran a 4.78 second 40-yard dash with a 1.68 second 10-yard split.

The crowd of fans clustered in the south-end stands at Lucas Oil gasped and applauded his performance, which came in at an unofficial 4.82 seconds. The time was already impressive, but NFL Network commentators said the hand-timers along the track knew his official time would probably be lower as soon as he ran.

Davis’s 40 time is the fourth-fastest ever for a defensive tackle, just 0.1 seconds slower than record-holder Aaron Donald, despite Davis having over 50 pounds on Donald. He wasn’t the fastest tackle at the combine — his 305-pound teammate Devonte Wyatt ran a 4.77 — but Davis’s run almost immediately went viral as commentators and fans marveled at his size and speed, and his time was 0.32 seconds faster than the tackles’ average 5.10-second time.

Karlaftis didn’t run the 40-yard dash at Saturday’s workout, but he did post a 38-inch vertical jump, tied for second at his position; bench pressed 21 reps of 225 pounds, good for sixth among edge rushers; a 4.36-second 20-yard shuttle run, also good for sixth; and a 10-foot-1-inch broad jump, good for 11th.

He showed good direction change and speed during his on-field drills as well — important fundamentals for his position. Karlaftis is projected to go in the top 16 overall picks by NFL.com’s mock draft, and his intro screen said he “already has the disposition of a pro lineman.”

In his combine interview, Karlaftis described learning American football from scratch while playing it as a kid, having never been exposed to it during his early life in Greece. He said his goal with getting to the NFL was to follow in the likes of the NBA’s Giannis Antetokounmpo as an inspiration to Greek kids who want to succeed in American professional sports.

“Hopefully, I can continue that trajectory to a certain extent (and) give inspiration to those kids that nothing’s impossible,” Karlaftis said.

The opportunity available to every player invited to the combine is obvious, but Jordan noted the fans in attendance were getting an equally special chance.

“You’re watching the saplings begin to grow,” he said, noting how the drills were often the jumping-off point for the careers of many of the young athletes present.

Jordan was a member of the 2011 NFL Draft class, often cited among the best ever with 17 of the first-round selections, earning a spot in the Pro Bowl at least once. The class featured names like Cam Newton, Von Miller, Julio Jones and Purdue’s Ryan Kerrigan, whom Jordan said he roomed with at his combine.

This year’s NFL draft will also feature a large assortment of talent and speed at the wide receiver position. With players like USC’s Drake London, Alabama’s Jameson Williams and many other talented athletes, the combine will feature many projected first and second round draft picks set to make an immediate impact.

Purdue junior wide receiver David Bell was sure to make some noise in the draft as soon as he entered Lucas Oil Stadium Thursday. He is projected as a day-2 pick, according to Bleacher Report. Bell is ranked as the number 12 receiver in the draft behind two other notable Big Ten receivers in the Ohio State duo of Garrett Wilson and Chris Olave.

While the Ohio State wideouts have captured a lot of attention as a result of their team's success and recent College Football Playoff Appearances, Bell won the 2021 Big Ten Receiver of the Year title. He racked up 93 receptions for 1,286 yards and 6 touchdowns in 2021. The two-time first-team All-Big Ten receiver looked to further improve his draft stock in front of NFL scouts at the combine in Indianapolis this past week.

David Bell ran the 40-yard dash Tuesday and ran a 4.65, marking him as the 29th fastest receiver in that event and the 6th fastest Big Ten receiver. In a year with eight wideouts registering 40-yard dash times of under 4.4, Bell needed to step up in other events to make up for his slower dash time.

Bell didn’t participate in the bench press event in Tuesday’s workout, but he did post a 33-inch vertical jump and a 9-foot-10 inch broad jump marking him as the 26th and 29th best receiver in these respective events.