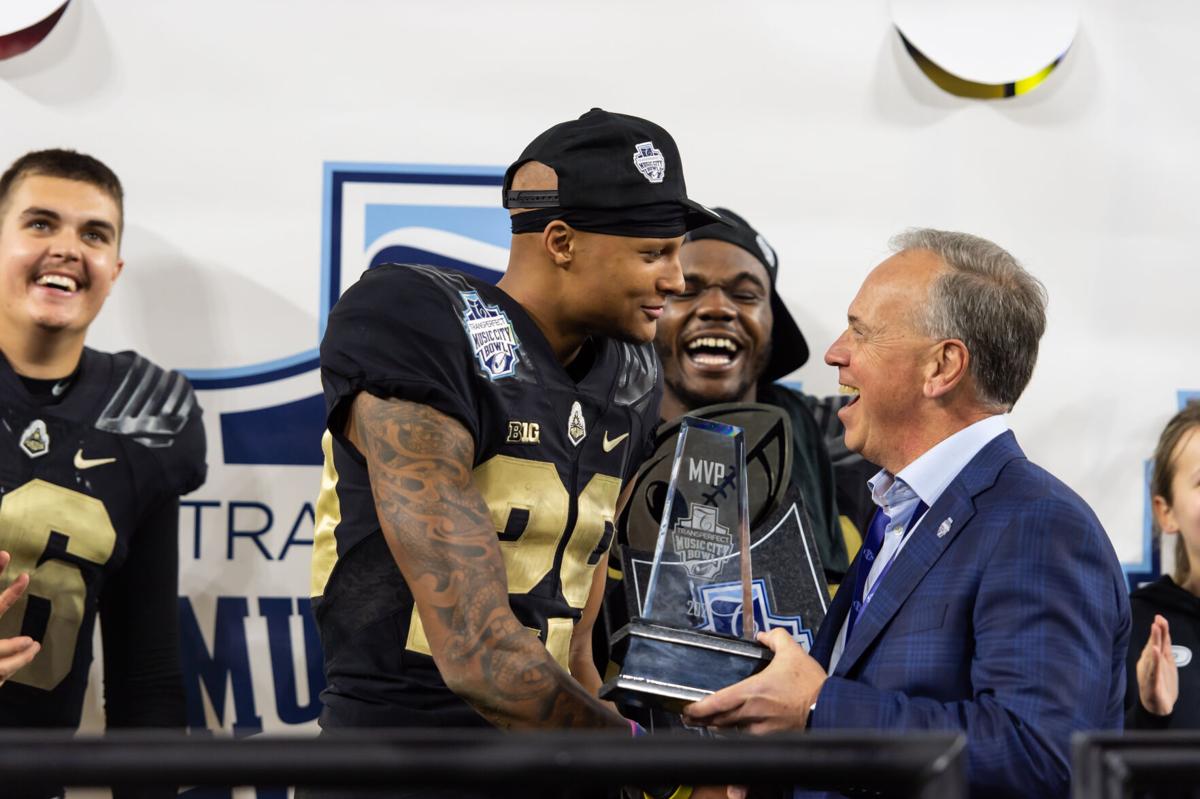 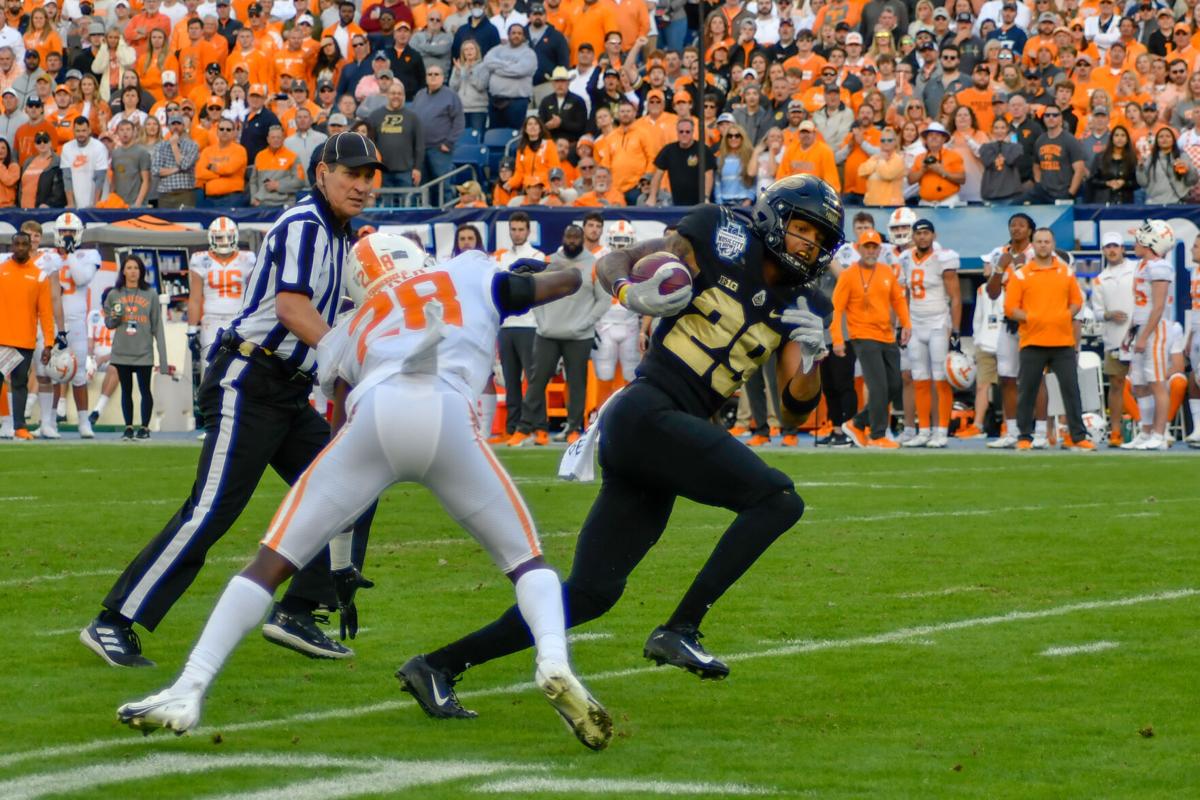 Junior wide receiver Broc Thompson gets around the defender to run the ball in for a touchdown. Thompson had a huge performance with seven receptions good for 217 yards and two touchdowns against Tennessee in the Music City Bowl on Thursday. 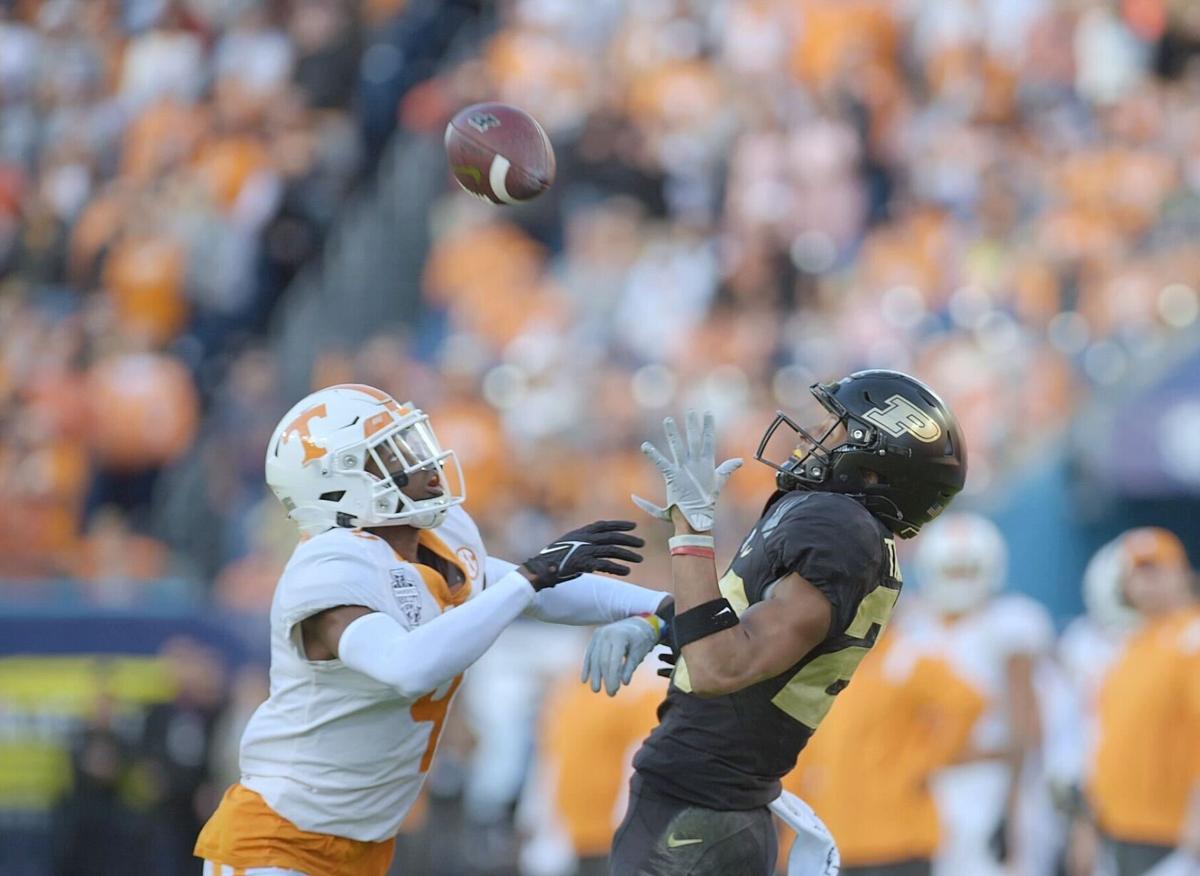 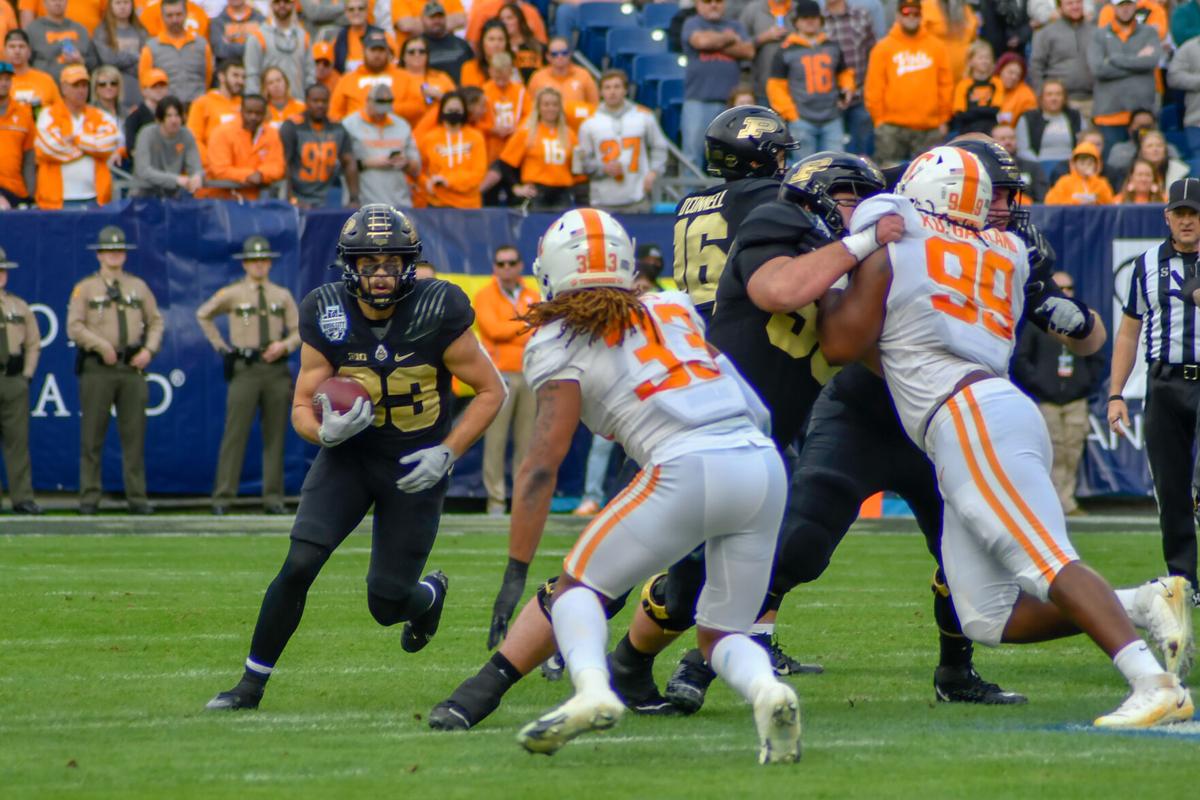 Sixth-year wide receiver Jackson Anthrop carries the ball around the offensive line. Anthrop picked up 2 yards on 2 rushing attempts. He grabbed 5 receptions for 74 yards. And he was 0 of 1 in passing in Thursday's bowl game. 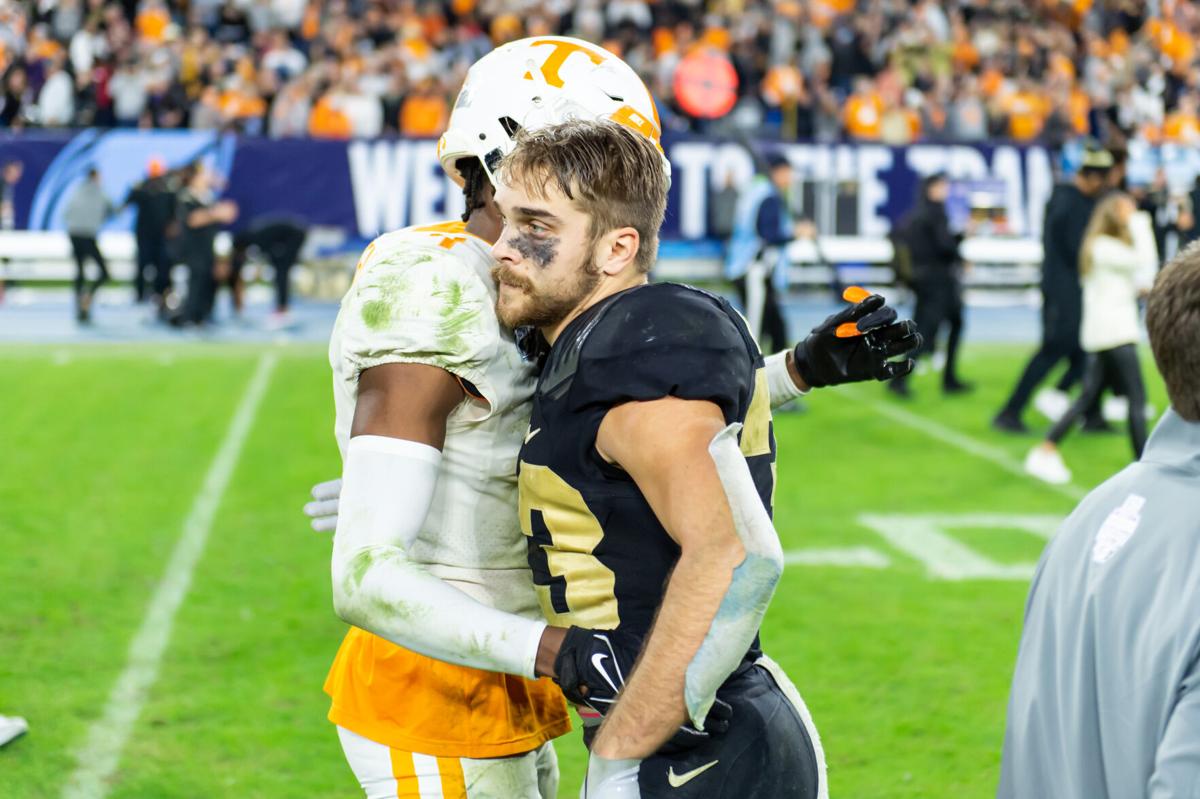 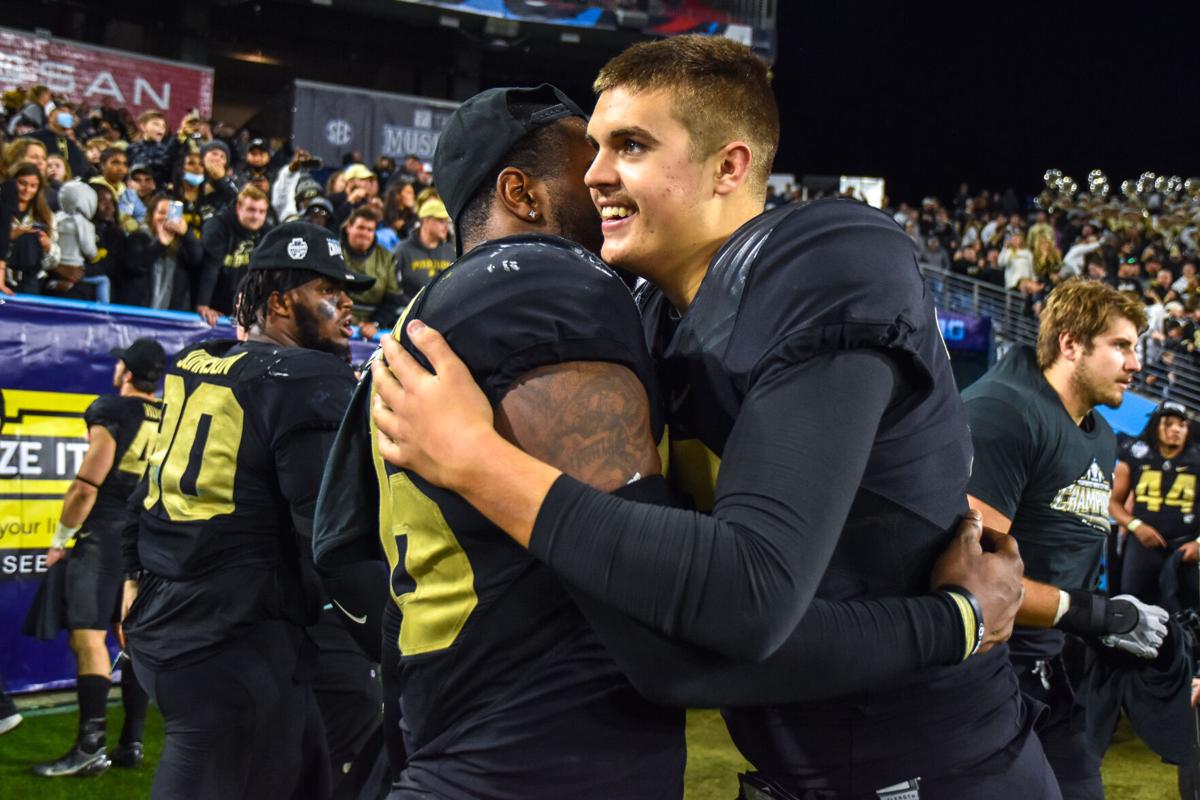 Fifth-year quarterback Aidan O'Connell hugs a teammate as he comes off the field. 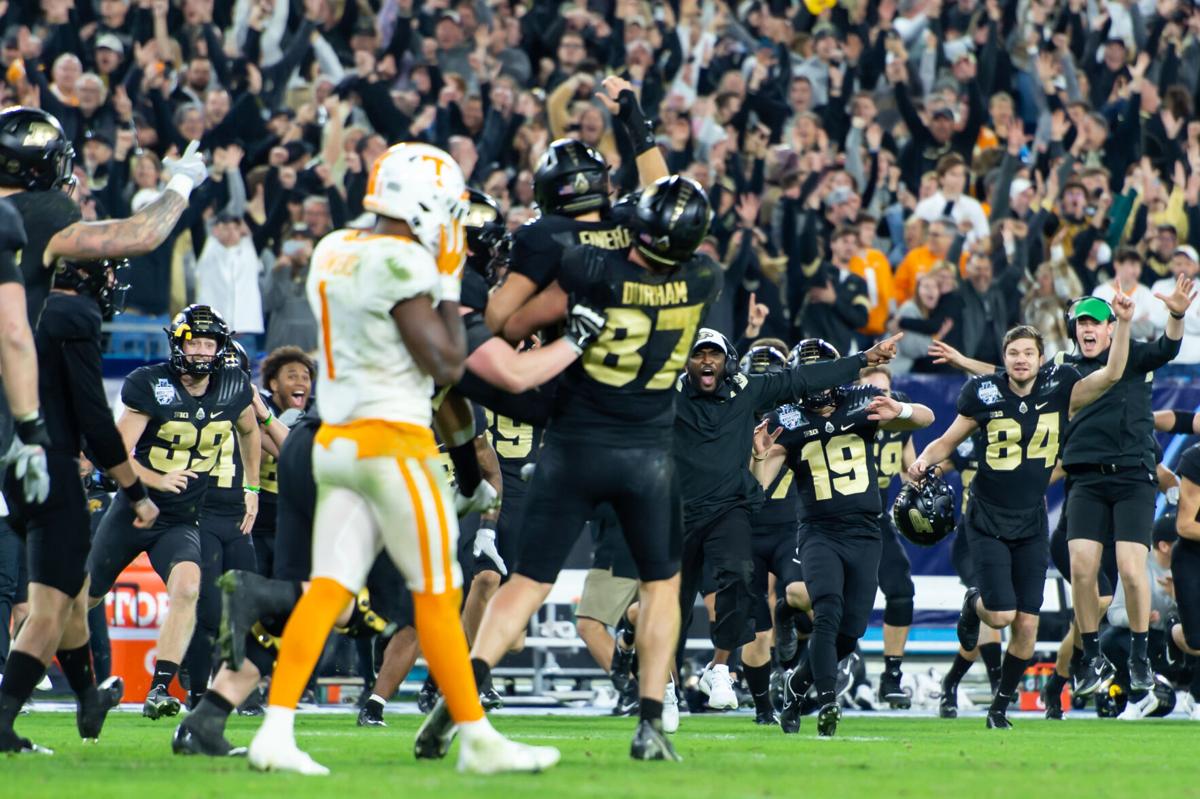 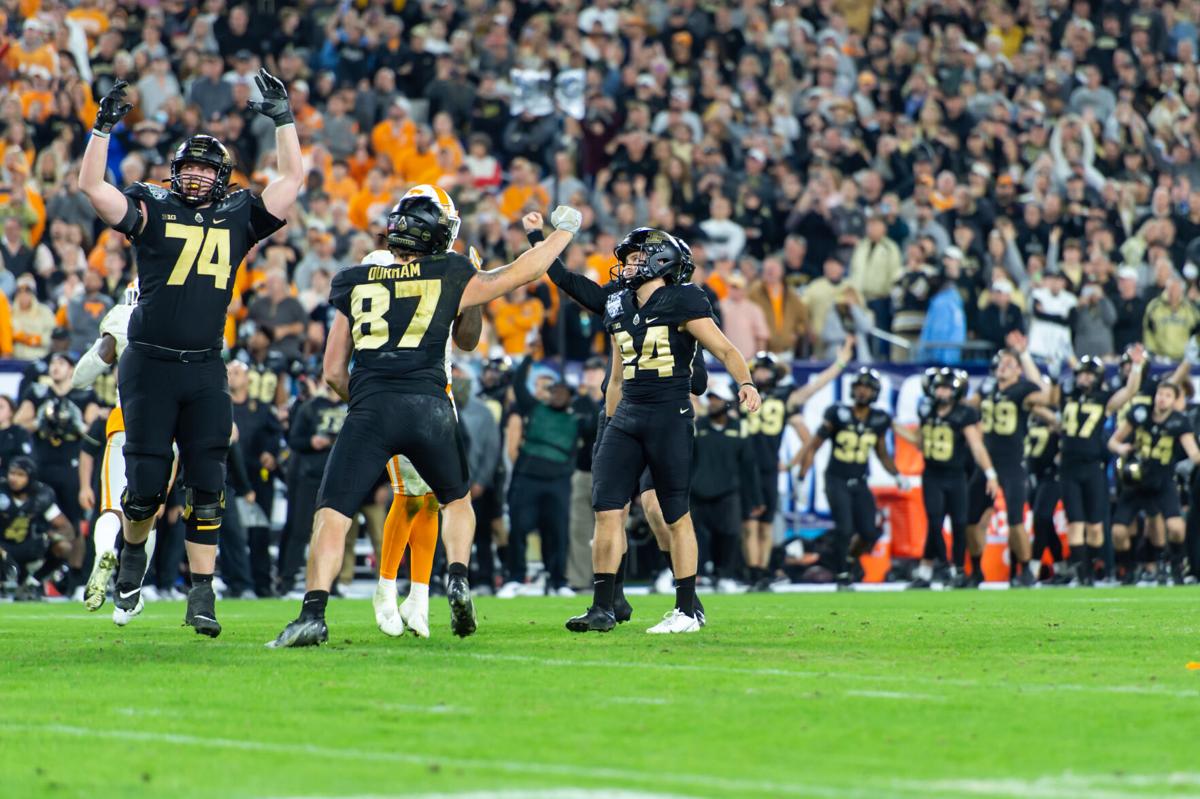 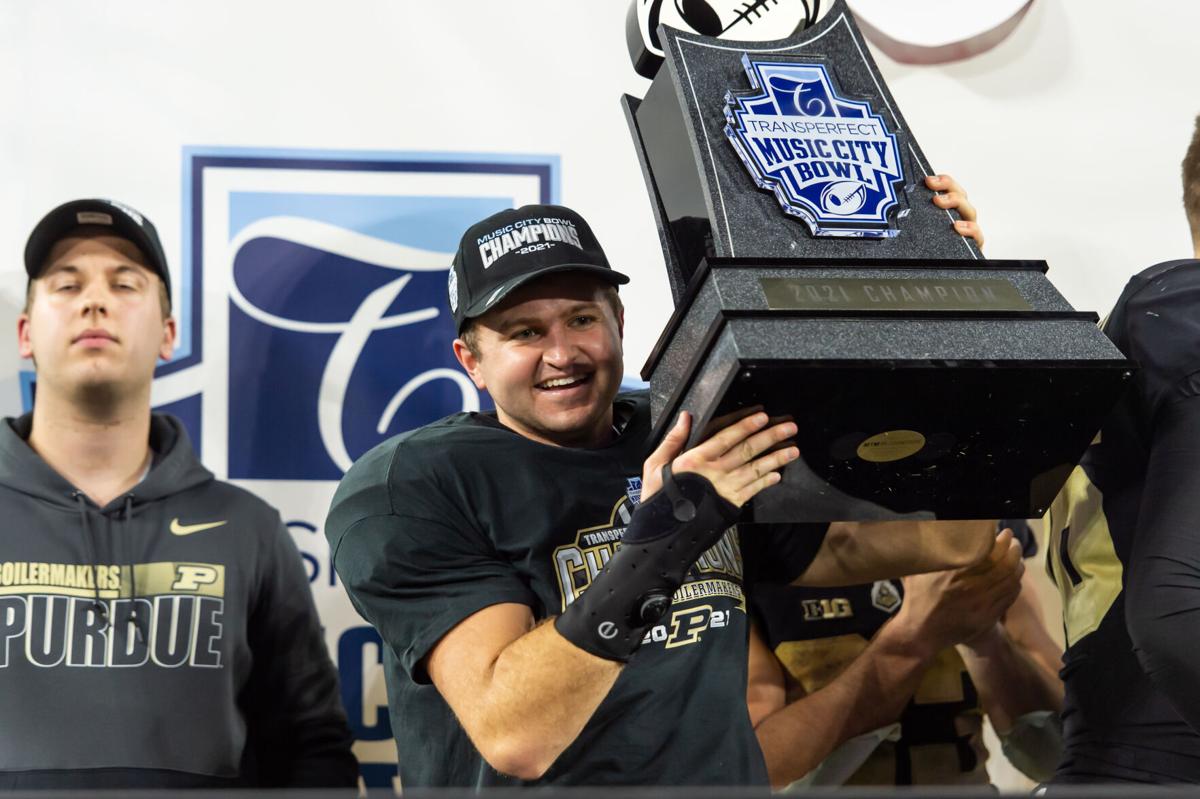 Junior wide receiver Broc Thompson gets around the defender to run the ball in for a touchdown. Thompson had a huge performance with seven receptions good for 217 yards and two touchdowns against Tennessee in the Music City Bowl on Thursday.

Sixth-year wide receiver Jackson Anthrop carries the ball around the offensive line. Anthrop picked up 2 yards on 2 rushing attempts. He grabbed 5 receptions for 74 yards. And he was 0 of 1 in passing in Thursday's bowl game.

Fifth-year quarterback Aidan O'Connell hugs a teammate as he comes off the field.

Against the odds and in pain, the MVP of Music City Bowl can recuperate during the offseason knowing he gave it his all.

Broc Thompson had a career-type performance on a big stage Thursday in Nashville. He set a bowl record with 217 yards receiving. He did that with seven receptions with a pair of touchdowns in Purdue’s come-from-behind 48-45 overtime win over Tennessee.

And get this – he was as low of eighth on the receiving corps depth chart at the start of the season.

“You know what, even when we first got Broc – he’s a transfer from Marshall and he’s from Indianapolis – I love to get guys from the state who care, representing their state – and he knew a lot of guys on the team,” said Coach Jeff Brohm.

“Right away he was a good leader. I think all the receivers will tell you that. He’s a great leader, he’s unselfish. He played some. And then to go through all he did and still to have a great attitude and continue to work hard and be available. Really, he wasn’t able to practice at all and when he did it was as slight as we could do to kinda keep him fresh. To play with all those injuries is a credit to what he’s all about – just a true representation of an unselfish, a great teammate.”

While Thompson played in all 13 games this season, he had scored only two TDs prior to the bowl game. And before Thursday, he only had 240 total yards receiving all season.

In the offseason, the 6-3 junior wide receiver who played two years at Marshall, anticipates having surgeries on both knees.

@CantGuardBroc awesome job tonight man!!! You were hurting all game. You made it happen for yourself and the Boiler nation! Thanks Broc! pic.twitter.com/lWUKHwN4Xj

No Purdue WR has ever had more receiving yards in a bowl game than Broc Thompson (217) 🤯 pic.twitter.com/VuETyg9pz7

Thompson comes from an athletic family. His dad played Major League Baseball for nine seasons. He has seven other siblings, including brother Treveor who played basketball at Ohio State. And his youngest brother, Cade, has battled cancer in his leg to return to high school football in Indianapolis.

His brother's cancer is what brought him back to Indiana to play at Purdue – to be closer to home.

Due to my little brother just beating cancer and a lot of prayers, i would like to announce that i am coming HOME and committing to Purdue University! #BoilerUp Thanks to coach @CoachShephard @JeffBrohm for the opportunity! LETS WORK! pic.twitter.com/Nm0za7Bz0S

“And another thing (that helped me finish) was that Jackson Anthrop has poured heart and soul into this team,” Thompson said. “I promised him that I would finish the game for him because he deserved to go out a winner.”

Anthrop does what’s asked of him and perhaps even more.

“He’s a true Boilermaker,” Thompson said. “He will have my respect for the rest of my life. He’s a great person and a he’s an even better leader.”

On Thursday, Anthrop, a 5-11 wide receiver, did his thing catching the ball, but he also threw a pass and fielded a punt, gaining two yards. Anthrop had five catches for 74 yards. He ran the ball twice for two yards. And he was 0-1 in passing on an unsuccessful trick play to the endzone.

“I’m really proud of these guys, they competed to the end, they played hard and we found a way to barely win,” Brohm said. “And that’s football at a high level and it’s football in bowl games. We have a group of guys who can play to the end and not worry about anything else.”

Thompson had high praise for his quarterback, Aidan O’Connell, too.

“Our quarterback Aidan, he’s a phenomenal guy. He’s an upstanding leader,” Thompson said. “We all look up to him every time. We just trust that he will lead us in the right direction and I can’t do it without these guys – the O-line and God, my Lord and Savior, that’s what’s carried me through the season.”

O’Connell, a former walk-on, was 26 of 47 in passing for 534 yards and five touchdowns. He also had three interceptions.

His performance was part of a wild ending to Thursday’s game.

At the end of the third quarter, Tennessee led, 31-30. It stayed that way until the final five minutes of the game. Those last five minutes and overtime saw the teams combine for another 32 points scored.

In the overtime, Tennessee went on fourth down twice – converting once and failing the second time from the 1-yard line.

“I’ve never been in a game like this. It’s a once-in-a-lifetime opportunity,” O’Connell said.

“I don’t have a good description (of that crazy ending). That’s why you love the game. It’s why it keeps bringing you back,” he said. “That fact that it’s unknown that no one knows what’s going to happen – it’s not a movie, or a TV show or an actor who gets three tries. It’s like the world is watching and anything can happen.”

Another newcomer who made a name for himself was graduate student kicker Mitchell Fineran – a transfer from Samford. He had four field goals including a 39-yarder to win the game in overtime.

PURDUE WINS ‼️@BoilerFootball knocks off Tennessee in the @MusicCityBowl on a walk-off FG in OT 🙌 pic.twitter.com/uNI2KBZQw4

Can’t thank God enough!! Proud to be a part of this team!! What a great way to end this season!! Boiler up!!! @BoilerFootball pic.twitter.com/op6q1sYqc8

“We were very fortunate to add him to our team this offseason and I think we knew right away, pretty quickly, that his personality was exactly what we were looking for – it’s perfect for a kicker, nothing bothers him, he’s a great teammate, he’s very level-headed,” Brohm said. “He was clutch. He was clutch the last half of the season.”

For Purdue, the win was vindication from its 2018 Music City Bowl visit – a 63-14 blowout loss to Auburn.

“When we didn’t know what bowl we were going to, I said, ‘there was no way the Music City Bowl was going to pick us’ after that last performance,” Brohm said. “So, I knew when they did I was going to have to sign a waiver to agree not to get blown off the field. So, we wanted to work hard and prove ourselves and have a better showing.”

Purdue ended its season at 9-4, the most wins for the football team since 2003.

Safe to say that @CantGuardBroc will never forget this night. pic.twitter.com/c9FeTgA1Aq

Congrats to the Music City Bowl MVP @CantGuardBroc . A great ambassador for our program, school, and community. pic.twitter.com/PvFolysoLJ

NASHVILLE, Tenn. - In a game that devolved into a track meet in the fourth quarter, it was a…

Mitchell Fineran hit a game-winning field goal in overtime to lift Purdue (9-4) to 48-45 win in the Music City Bowl on Thursday in Nashville. …