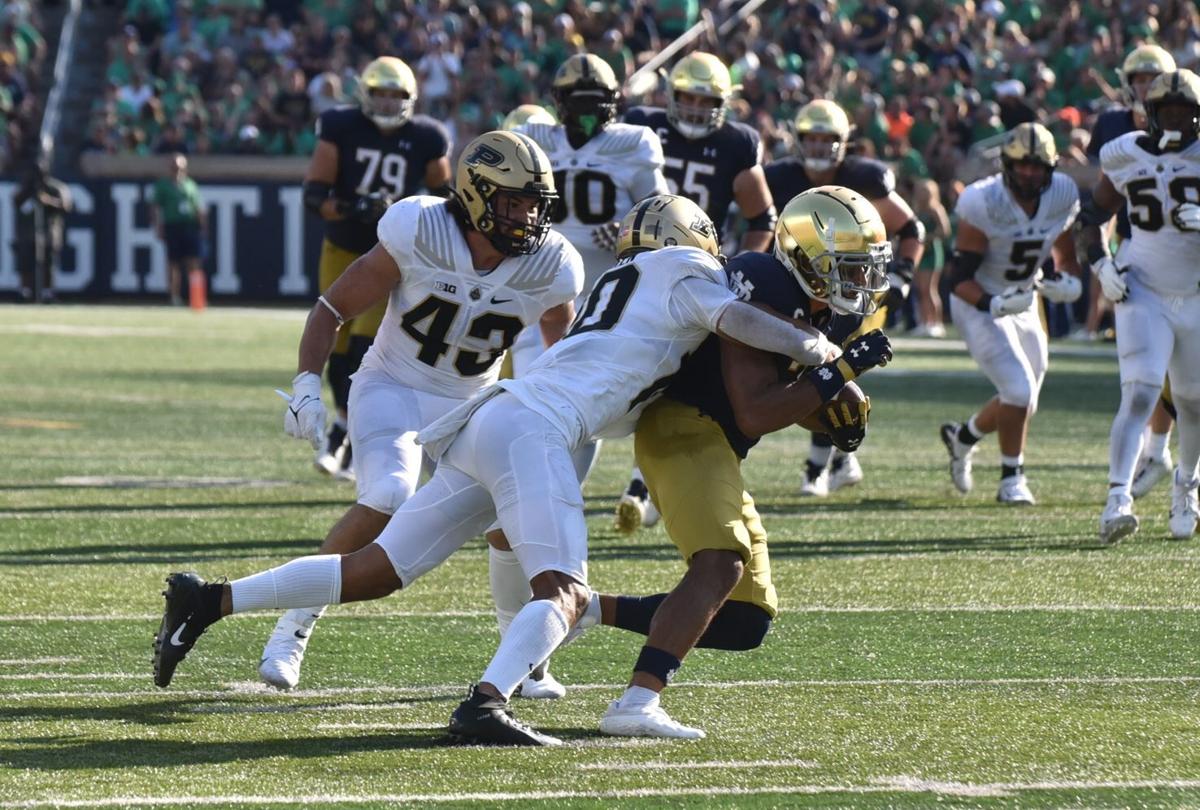 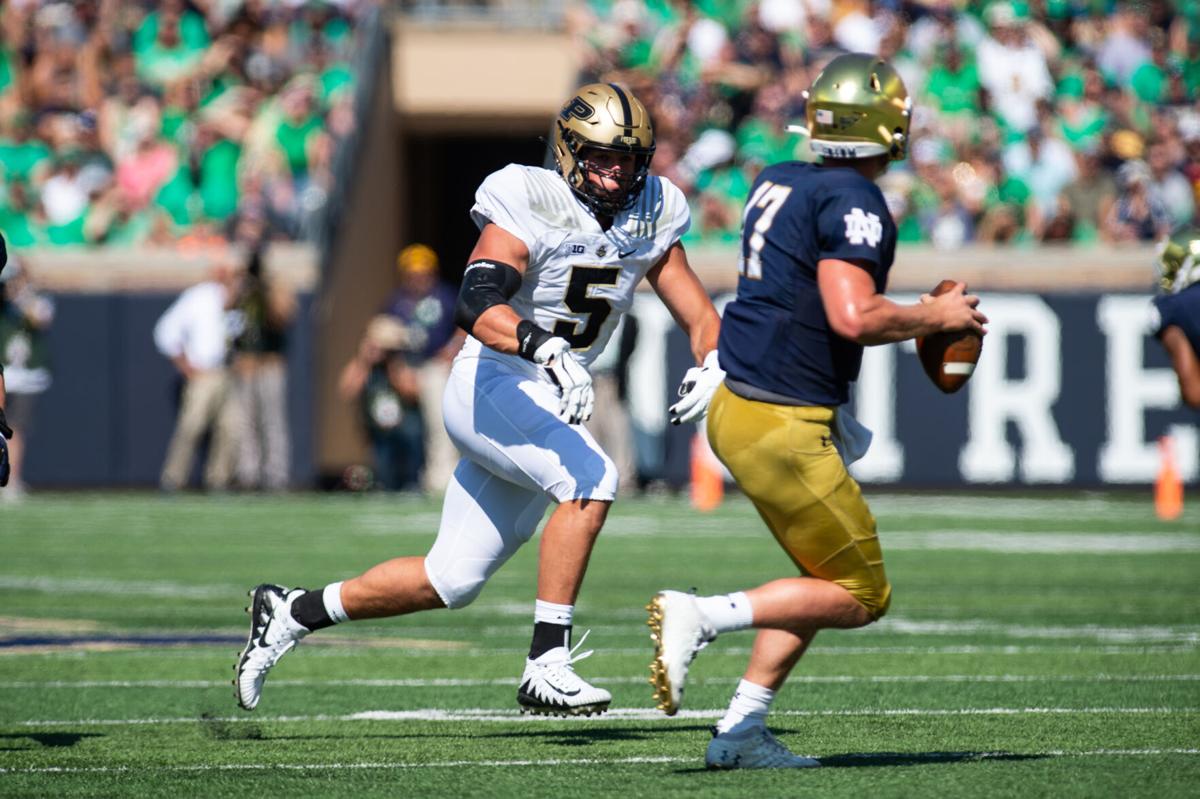 The University of Notre Dame has a decree that Saturday afternoon Mass begins 30 minutes after the end of a mid-afternoon football game during the fall.

When Saturday’s game against Purdue ended, many of the 74,000 fans in attendance moved in a stream across campus to the Basilica of the Sacred Heart for their service. By 7:30 p.m., they could be seen at the Lourdes Grotto — a rocky nook modeled after a shrine in Lourdes, France — lighting prayer candles and offering devotions. Their ritual mirrored what they’d seen on the field.

“Give Notre Dame credit,” head coach Jeff Brohm said after the game. “They outplayed us.”

Purdue’s defense showed its faith well, but the team fell 27-13 for its first loss of the young season. The unit forced four three-and-outs — two on the Irish’s first three drives — and only allowed four drives longer than five plays. Two of the four ended in red zone field goals, one ended in a longer field goal attempt that missed and one resulted in a punt from Notre Dame territory.

Junior defensive end George Karlaftis headed a line that was all over transfer quarterback Jack Coan. He logged a solo tackle, half a sack and 1.5 tackles for loss on the day. Junior safety Cam Allen, sophomore safety Marvin Grant and senior linebacker Jaylan Alexander combined for half of Purdue’s total tackles.

Alexander started the game off with a bang, powering through the line and sacking Coan for a 9-yard loss on the first play from scrimmage. His play was one of four Purdue sacks for the day from a defense that had only logged one through its first two outings.

“I felt like that was our job: everyone gets to the ball,” Allen said. “No matter what the score is, play hard the whole game.”

The defense played as aggressively as it had during the previous two weeks, Alexander and Allen said, and the results spoke for themselves for most of the game.

But in the land with a mural popularly known as “Touchdown Jesus” overlooking the stadium and services scheduled directly after games, teams are not saved by faithful defense alone. Their faith must be paired with good offensive works.

In many ways, Purdue’s offense failed to provide those good works.

The Boilermakers ended nine of their 14 drives in their own territory. Of the three that ended on Irish turf, four ended in the red zone. Two ended in field goals, one ended in a 2-yard touchdown pass and one ended in an end zone interception.

The afternoon was a cornucopia of screen passes, short runs and stuffs at the line. Purdue didn’t practice its Hail Marys, and couldn’t get a vertical passing or running game going for the majority of the affair. Fifth-year wideout Jackson Anthrop led the team with 90 yards on seven catches, but his late-game receiving heroics couldn’t help the team’s inefficiency.

The team attempted a true trick play once: a wideout pass play ended in junior receiver Milton Wright taking a sack 7 yards behind the line of scrimmage.

To make matters worse, Purdue’s punt team decided to treat its punts like homilies and kept them short. Freshman Jack Ansell and redshirt freshman Brendan Cropsey averaged 35 and 42 yards per punt on kicks made from the Purdue 20-25 yard line.

Notre Dame seized on the opportunity provided by Purdue’s short possessions and its own short fields to wear down the aggressive defense and start to pop off longer and longer plays.

All three Irish touchdowns came on explosive plays: a 39-yard pass that nearly made two Purdue defensive backs collide, a 62-yard bomb and a 51-yard run in the last half of the fourth quarter that left three tacklers in the dust.

Late in the game, Purdue swapped out starting junior quarterback Jack Plummer for fifth-year Aidan O’Connell. Brohm said it was to take pressure off Plummer, who had been “hit and under duress” all afternoon. O’Connell seemed to be living up to his reputation as a late game magician when disaster struck.

Here is where the religious references will end: David Bell took a truly scary hit late in the game. Going to the ground after what could have been a momentum-swinging chunk reception, Bell was struck from behind by safety Kyle Hamilton and his head hit the ground hard. He laid on the field for what felt like an hour while medical personnel knelt around him and Purdue’s entire sideline gathered at a distance.

The stadium was as quiet as it had been all afternoon, with only a ripple of mutters after officials announced they were reviewing the play.

After Bell was helped into the injury cart and taken off the field, the officials returned with their ruling: incomplete pass. Not only did Purdue lose its most dynamic playmaker, but the reception he made didn’t count. Coming right after another long incompletion that was prevented by a questionably uncalled pass interference — a cornerback grabbed an entire handful of his jersey — the injury put a brutal cap on an already lackluster day from the star.

The offense played better than it had all afternoon after that point. O’Connell made passes of 13, 16 and 12 yards as the Boilers marched down to the Notre Dame red zone. But the luck ran out when a pass intended for junior tight end Payne Durham slipped through his hands and into Hamilton’s for a brutal interception. O’Connell would cap his afternoon with a long, game-sealing Hail Mary interception on the team’s last drive.

But the day ended with some good news. After the team’s postgame press conference, the team announced Bell was “up and walking” with his teammates, and Bell himself took to Twitter Sunday afternoon to confirm he was healthy.

The defense is confident in its performance and saw today as an improvement.

“Today was just another step in our play,” Alexander said. “We just need to get 1% better every day.”

And Purdue is heading into a home game against Illinois (1-3) with a 2-1 record, its best non-conference record since head coach Jeff Brohm’s first season. The Illini will be a get-right game in every sense of the word for the Boilers, who are favored by 10 points per ESPN.