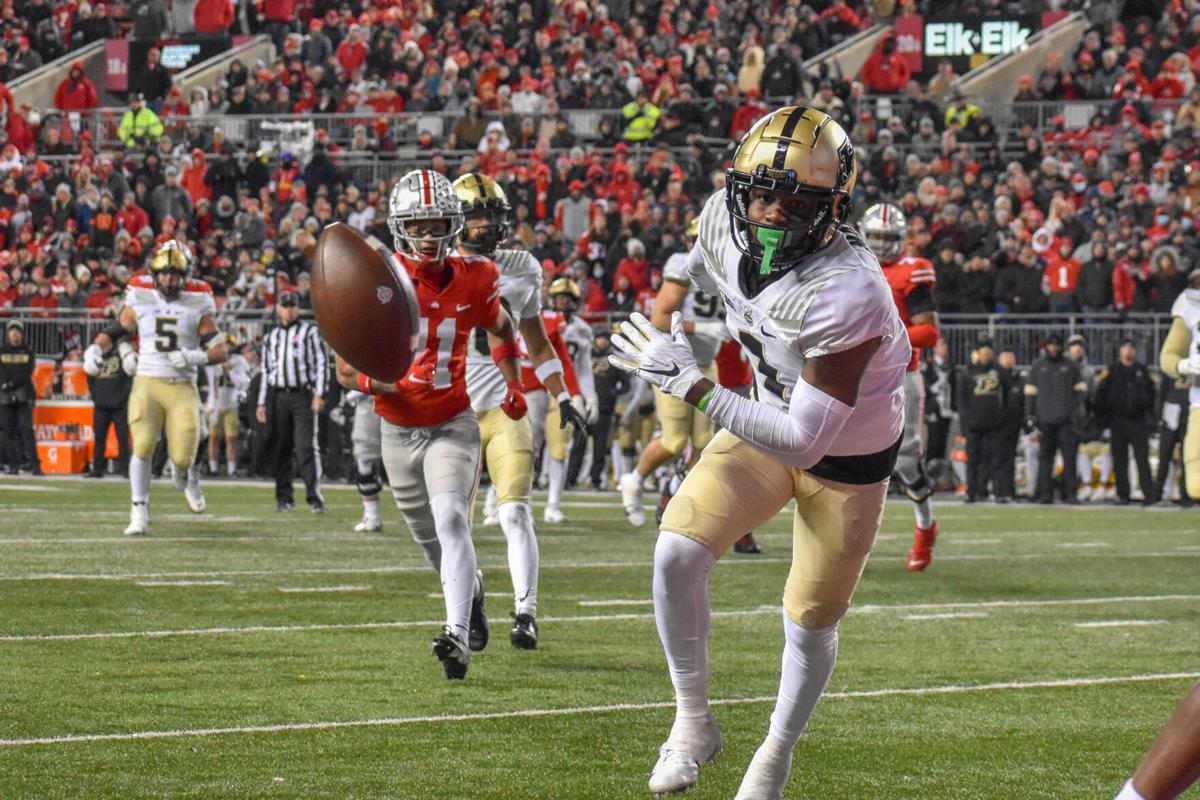 Fifth-year cornerback Dedrick Mackey turns and sprints toward a missed pass. Mackey had six tackles for the Boilers on Saturday. 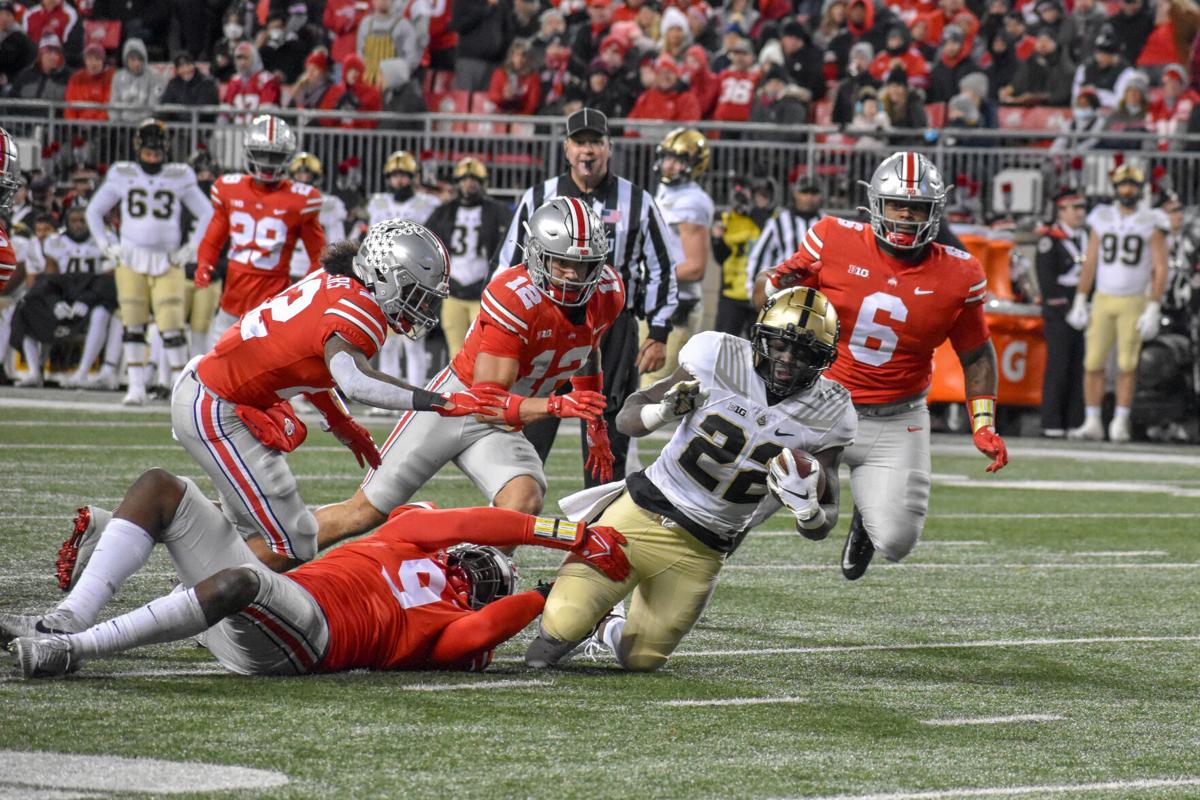 Junior running back King Doerue is brought to his knees by the Ohio State defense. Doerue had 10 carries for 26 yards in Purdue’s loss. 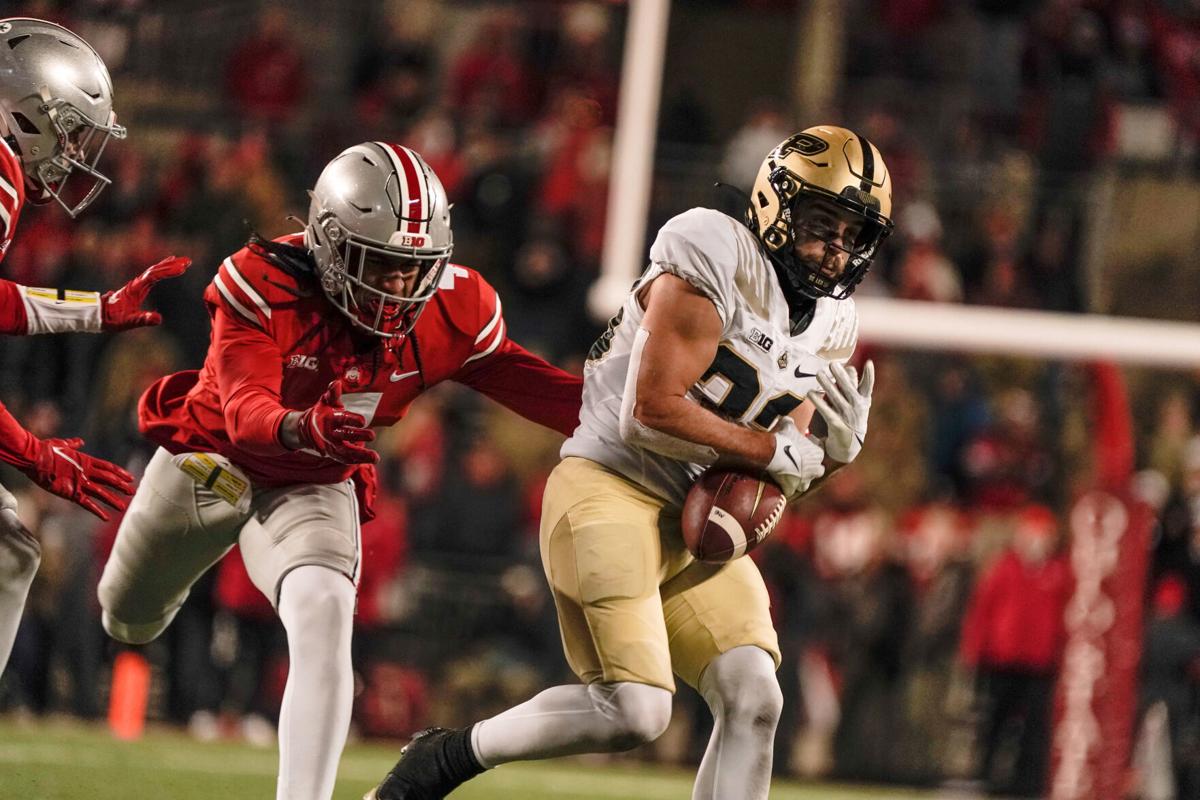 Fifth-year cornerback Dedrick Mackey turns and sprints toward a missed pass. Mackey had six tackles for the Boilers on Saturday.

Junior running back King Doerue is brought to his knees by the Ohio State defense. Doerue had 10 carries for 26 yards in Purdue’s loss.

A big win against the then-No. 3, then-undefeated Michigan State Spartans seemed like a distant memory when Purdue took on No. 4 Ohio State Saturday night.

In spite of the final score, Purdue’s offense had a big game. The Boilermakers’ 31 points were the most the Buckeyes had allowed since losing to then-No. 12 Oregon 28-35. Ohio State had allowed 19 points per game before their matchup with Purdue, notably holding Penn State to 24 points while forcing two fumbles and picking off quarterback Sean Clifford once in a late-October matchup.

“I thought we played well offensively, we ran the ball well,” O’Connell said. “Overall, there’s a lot to build on.”

One highlight from the game was Purdue’s offensive performance in the third quarter, when junior wide receiver Milton Wright and Anthrop each caught a touchdown to make it a 21-point game with the fourth quarter still left to play. But the Ohio State defense stopped the Boilermakers cold, not allowing a single point in the fourth quarter.

To make matters worse, the Purdue defense simply could not stand in the way of Ohio State for most of the game, giving up 624 total yards of offense and 45 points in the first half alone.

“We knew they had a lot of weapons,” junior safety Cam Allen said about Purdue’s performance. “Going in, we just tried to watch film and see what routes they like to run out of certain formations.”

Purdue’s defense held Ohio State to one touchdown in the fourth quarter, but Ohio State quarterback C.J. Stroud had 361 passing yards and wide receivers Garrett Wilson and Jaxon Smith-Njigba each had over 100 yards and five total touchdowns in the game.

Allen kept his head held high and praised the entire defense for its performance throughout the season.

“Our motto is one snap,” Allen said. “That last snap we just played, we’re not worried about that one, we move onto the next one.”

O’Connell continued to show his support to his defensive counterparts, saying the unit had performed well when the team needed them the most all season. Purdue’s defense played a huge factor in sealing wins over two Top 5 teams, holding Iowa and Michigan State to 7 and 29 points respectively.

In addition to the defense’s overall performance, O’Connell is showing obvious improvement from his earlier starts. He has reached career highs in passing yards with 2086, passing touchdowns with 12 and a 71% completion percentage this season, and hasn’t thrown an interception in his last three starts.

“It was a loss at the end of the day and it’s going to be remembered as a loss, but there’s a lot of good stuff on our side of the ball,” O’Connell said.