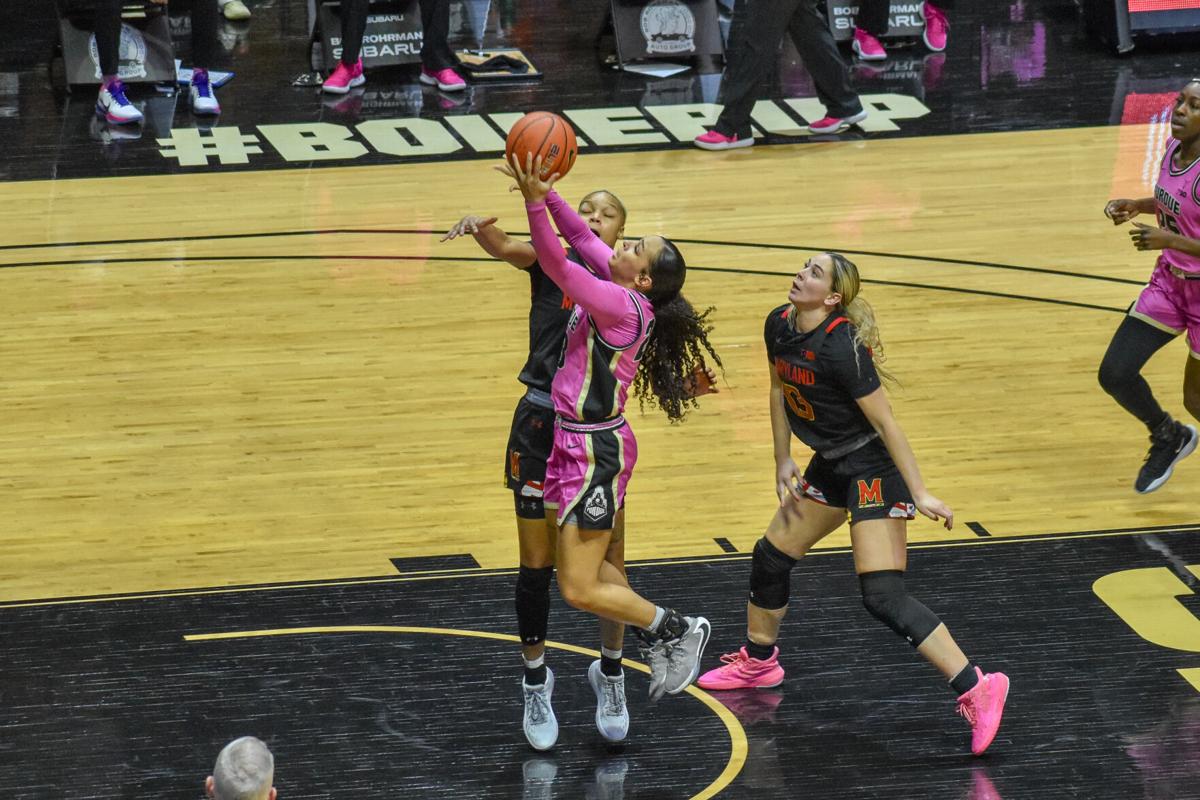 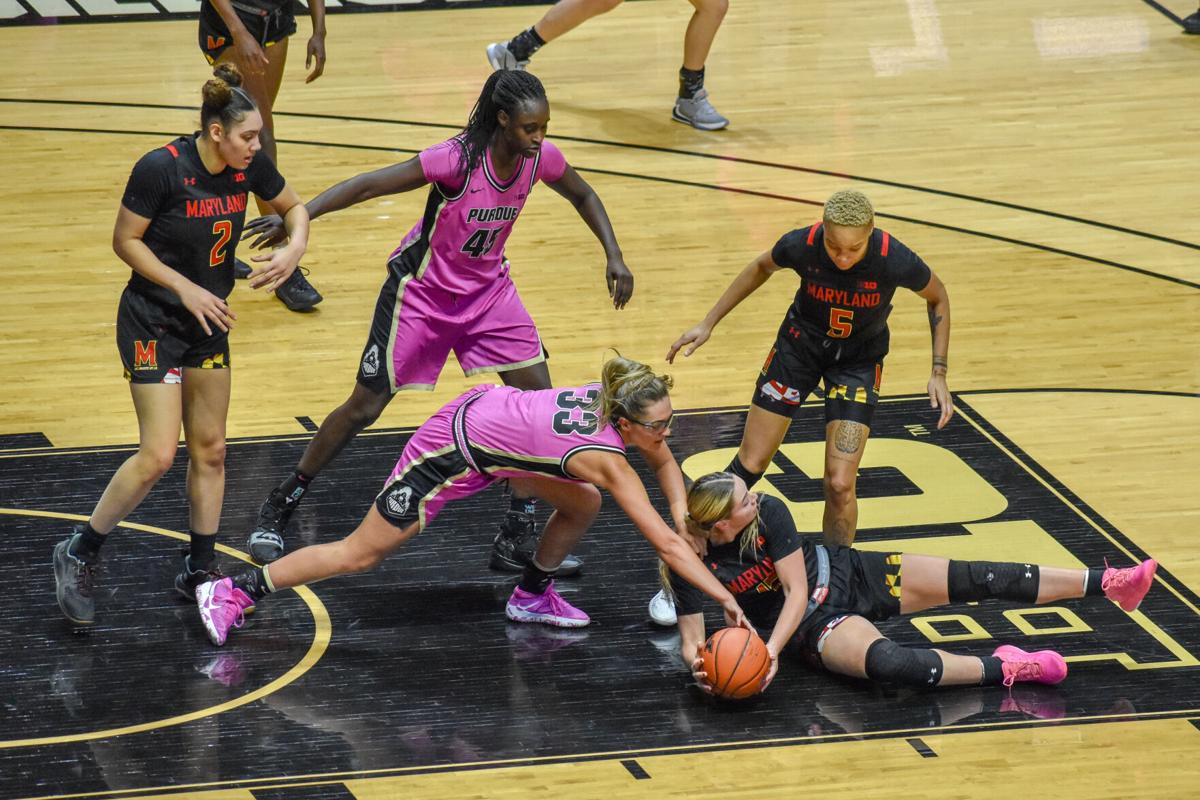 Freshman guard Madison Layden dives to the floor to grab a loose ball. She had 8 points and 4 assists in Purdue's 88-59 loss to No. 8 Maryland.

The Purdue women's basketball team lost badly to No. 8 Maryland Thursday night, 88-59, a week after giving up 100 points to No. 15 Ohio State and days after losing by just 3 points to Michigan State.

The loss was the Boilermakers' (6-14, 3-13) eighth-straight. The team has not won since a Jan. 21 comeback against Wisconsin. Thursday night's loss wasn't attributable to bad luck or poor shooting the way the previous losses were; Purdue just got outplayed by a better team.

Maryland (18-2, 14-1) opened the game with an 11-2 run, effectively setting the tone for the whole affair. Purdue was forced to take two timeouts in the first quarter alone to stop the bleeding. Junior guard Kayana Traylor led the team with 15 points and three assists.

Purdue was able to narrow the gap at certain points, but Maryland consistently held it at arm's length, leading by 7 points after the first quarter, 18 after the second and 23 after the third. The Terps shot nearly 50% from the field and from the 3-point line, grabbed 50 rebounds, made six blocks and got 11 steals.

As the game went on, Purdue's energy seemed to deflate as defeat set in. The Boilermakers finished with 39% shooting from the floor and 31% from the line.

Sometimes you get speed bagged. It happens. Maryland: 88. Purdue: 59.

The Boilers missed their last three plays of the game, with freshman guard Madison Layden missing a 3-pointer with two minutes left, and another miss by junior guard Cassidy Hardin. The last attempted play of the game was a missed jumper by junior guard Brooke Moore.

The players found themselves giving congratulations to their opponents when there were 15 seconds left on the clock.

Head coach Sharon Versyp seemed to remain in good spirits though, and said after the game the team’s offense has been “a lot better” and that despite the losses, “they’ve been extremely positive. They’re fighters.”

Junior guard Brooke Moore said the team is “definitely looking forward” to its next game and there is “a lot of season left” to keep working.

The Boilers return to Mackey on Sunday against Illinois for Senior Day. The game will tip at 2 p.m. and air on BTN+

Purdue women's basketball got off to a rough start against No. 8 Maryland Thursday night, struggling to contain the Terrapins' scoring runs.

The Boilers ended the first half down 44-26.

Senior center Fatou Diagne scored the first shot for Purdue, but she was a lone voice in the first period. Purdue called a timeout with 6:09 left in the first quarter after Maryland (17-2) scored five out of its first eight attempted field goals to go on an 11-2 run. Junior guard Kayana Traylor started on offense but has been unable to deflect Maryland’s strong defense.

The timeout proved conducive to the Boilermakers as they were able to catch up to Maryland’s 9-point lead. But they quickly fell behind again. The end of the first quarter had Maryland up by 7 points.

Diagne took the lead on Purdue’s points, scoring over half of Purdue’s 15 points by the second quarter.

Purdue called another timeout as Maryland’s offense dominated and brought the score to 30-16 with five minutes until halftime. Traylor started to click on offense and Purdue struggled but managed to grab a few more turnovers before halftime.