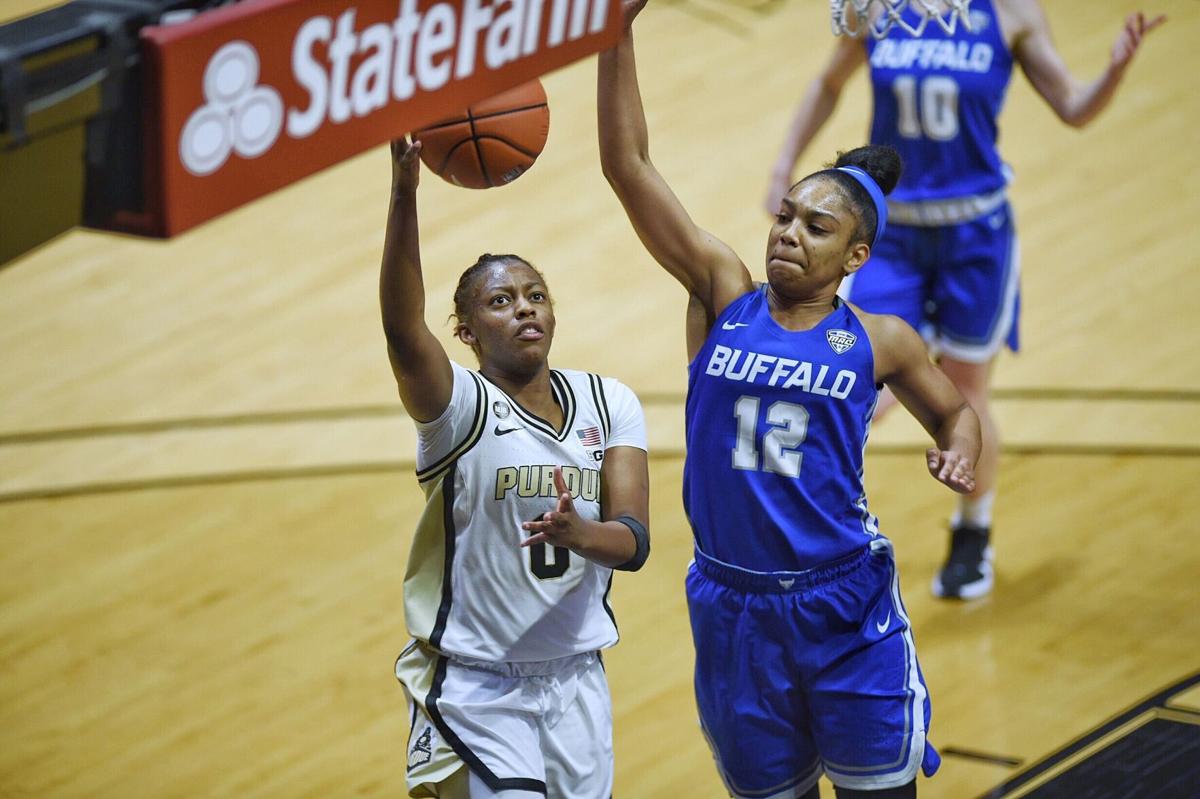 Junior guard Brooke Moore beats her defender to the basket, securing a layup. Moore finished with 20 points, and went 4-5 from 3-point range. 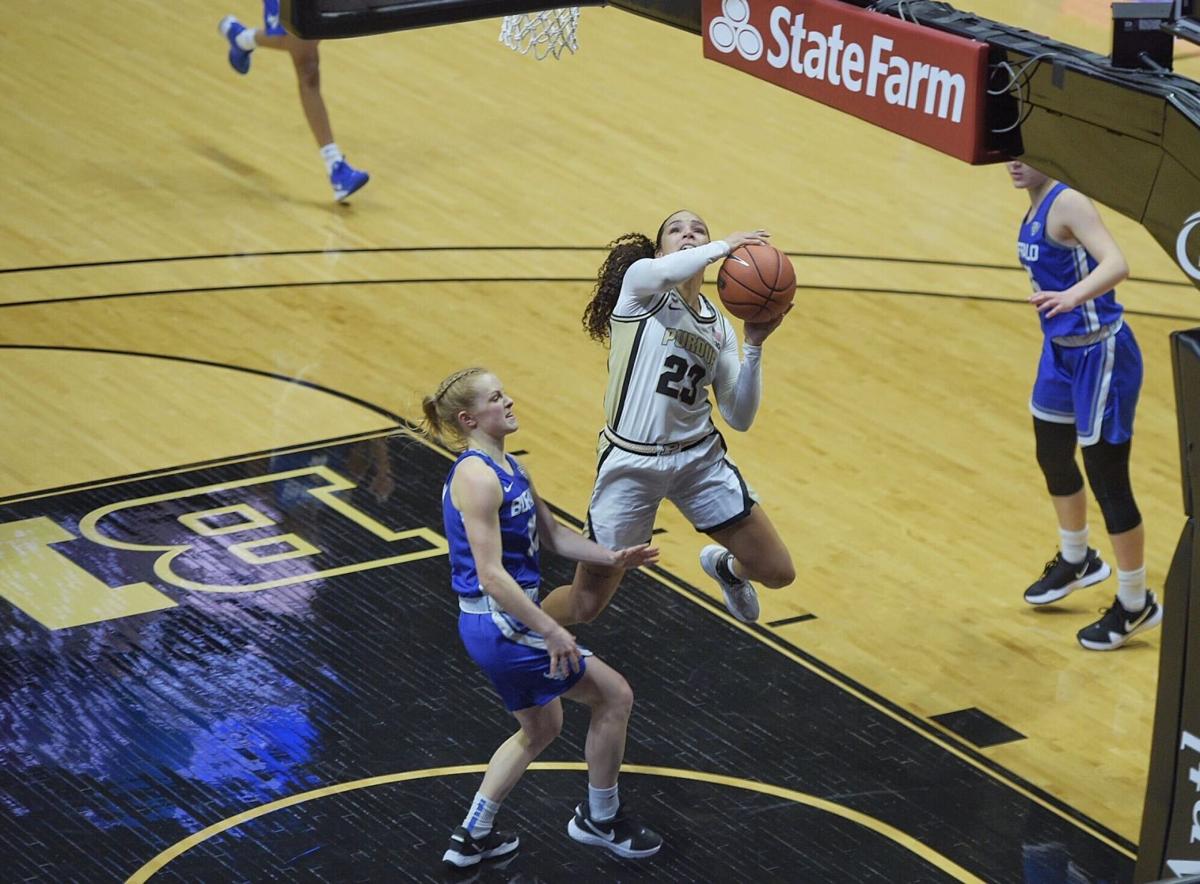 Junior guard Kayana Traylor elevates under the basket for a layup.

Junior guard Brooke Moore beats her defender to the basket, securing a layup. Moore finished with 20 points, and went 4-5 from 3-point range.

Junior guard Kayana Traylor elevates under the basket for a layup.

Hot shooting from deep and a disruptive defense helped the Purdue women's basketball hold off the Buffalo Bulls, 82-70, Wednesday night in Mackey Arena.

The Boilermakers (2-1) began the second half with an 8-0 run highlighted by a windfall of points from junior guard Brooke Moore, who led the team in scoring with 20 points, shooting 46% from the field. Moore got the offense rolling by sinking a corner 3-pointer, making her a perfect 4 of 4 from deep to that point. She  then stole the inbounds pass and laid the ball in for an and-one.

The Bulls' interior defense, impenetrable for much of the first half, began to collapse within itself the longer the game played on as the Boilermakers moved the ball around at a rapid pace, finishing the night with 21 assists.

"Whenever we share the ball, we're a much better team than when we play individually," Traylor said.

Turnovers were on the menu for both teams throughout the night, with the Boilermakers losing it 25 times, often through errors in ball handling and judgement. But the turnovers the Boilermaker defense created came from an active and handsy group that poked the ball loose from Buffalo (2-2) and swatted at passes and lobs, making it hard for a Bulls offense to find open looks to the basket.

Coach Sharon Versyp said the key to the team's offensive success started with its active defense.

"That's what we talked about all week," Versyp said. "Our defense needs to start our offense so we can have some easy layups on fast breaks and (create) some rhythm shots."

The game remained relatively close throughout the first half until a flurry of Boilermaker 3-pointers helped give the team a 10-point cushion heading into the break, 37-27. Purdue then expanded the lead to 21 before the Bulls charged back in a sequence of possessions midway through the third quarter. During that run, the Boilermakers turn the ball over three straight times and Buffalo go on a 7-0 run that cut the lead to 12.

The hot shooting persisted for the Boilermakers though, and lanes to the basket opened up for the offense as Buffalo's defense stretched out trying to defend the deep shot. Senior forward Tamara Farquhar came alive at the end of the quarter, driving to the basket at will and either laying it in or curling a pass around a defender to an open teammate for an easy bucket.

Farquhar filled up the stat sheet with a double-double (11 points, 13 rebounds)  to go along with five assists, a block and a steal. The forward also made her only 3-point attempt of the night and second of her career, an indicator of the overall efficiency of the team's shooting from deep.

After making just one 3 in their first two games, the Boilermakers finished the game 11 of 19 on shots from long range. That 58% conversion rate that sparked the team's offensive attack and delivered the team its second win in three tries.

Purdue returns to action at 2 p.m. Sunday when it hosts Bowling Green.

HALFTIME NOTES: A hot start from beyond the arc helped Purdue women's basketball build a 37-27 point lead heading into halftime against the Buffalo Bulls.

The Boilermakers (1-1) have cut apart Buffalo (2-1) with crisp cross-perimeter passes in the half-court, creating open looks and disrupting a Bulls' defense that has made it a point to prevent drives to the basket. After making just one 3-pointer in their first two games, Purdue found a rhythm from deep in the first half, connecting on seven of twelve shots from beyond the arc.

Junior guards Brooke Moore and Kayana Traylor lead the team at the break with 11 and 10 points, respectively, with Traylor also adding in 4 assists. Traylor found teammates in transition with ease and has been able to pump-fake her way into open space to knockdown midrange floaters and jumpers. Moore is on fire from deep as well, converting on all three of her 3-point attempts.

Both teams have lacked a degree of control in the game, combining for 25 turnovers. Purdue has been able to capitalize on them, scoring 20 points.

The Purdue women's basketball team found its groove Wednesday night against Buffalo, shooting 52.7% from the field and 57.9% from the 3-point …