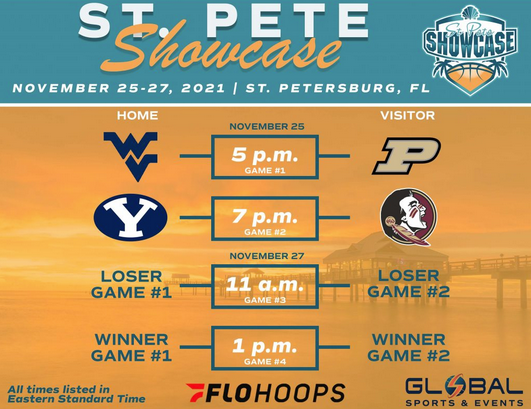 The Purdue women’s basketball team held its own against its first ranked opponent of the season, but lost to No. 22 West Virginia, 65-57, in the opening round of the St. Pete Showcase in Florida on Thursday evening.

“We played hard, (but there are) no moral victories for us,” said Coach Katie Gearlds on her post-game radio show. “I thought we had a great game plan. I thought we executed it very well. (With) just a couple of possessions here or there and that’s the difference in the ball game.”

The Boilers were led by Brooke Moore who had 13 points on 6 of 15 shooting – including 1 of 6 from 3-point range. She also had four rebounds, two assists, two blocks and one steal.

Joining Moore in double-digit scoring was Cassidy Hardin with 12 points on 4 of 10 from 3-point distance.

The Mountaineers also had two players in double digits led by Kirsten Deans with 12 points. A’riana Gray had 10.

The Boilermakers started slowly in the game. They were down 8-0 with 6:43 to go in the first quarter when the Mountaineers’ Dean hit a 3-pointer. The Boilers fought back to 8-4 on one free throw by Jeanae Terry (3 of 4 from the line and 1 of 6 from the field for five points).

It wasn’t until there was five seconds left in the game that the Mountaineers ever held a double-digit lead, 65-54.

“Our bench stepped up,” Gearlds said. “Jayla (Smith, 6 points) played really well, especially in the first half. Rickie (Woltman, 9 points) was great and she kinda kept us in the ballgame when Shay (Kyle, 0 points) got in foul trouble (3 fouls), but (there are) no moral victories, this one hurts.”

The first-year coach repeatedly used the same phrase throughout the 90-second radio interview.

“This one hurts,” she said again. “I know they are a ranked basketball team and probably we shouldn’t win these games, but we were right there. And (there are) some key moments we are going to learn from. Like I said, this one hurts.”

Purdue returns to action in the St. Pete Showcase at 11 a.m. Saturday when it plays Florida State (4-1). BYU beat Florida State in the second game on Thursday night setting up the Boilers-Seminoles matchup.

• Ra Shaya Kyle played just 4:50, after picking up two early fouls in the first quarter and a third early in the third.

• Purdue dropped its 19th straight game to a ranked opponent but fell by 10 points or less for just the third time in the streak.

• Purdue made 10 3-pointers for the first time this season and the first since Feb. 28 of last season against Illinois.

• Jayla Smith was the lone Boilermaker to finish with a positive plus-minus. The rookie tallied six points on two 3-pointers.

– Information from Purdue Athletics contributed to this report.