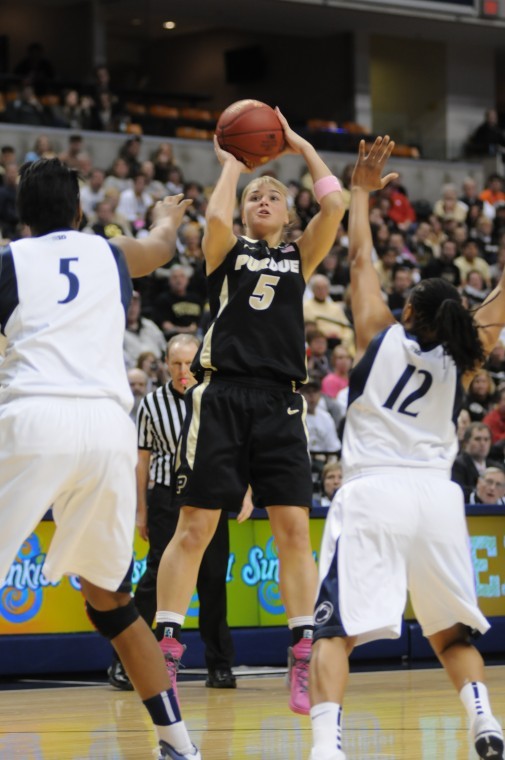 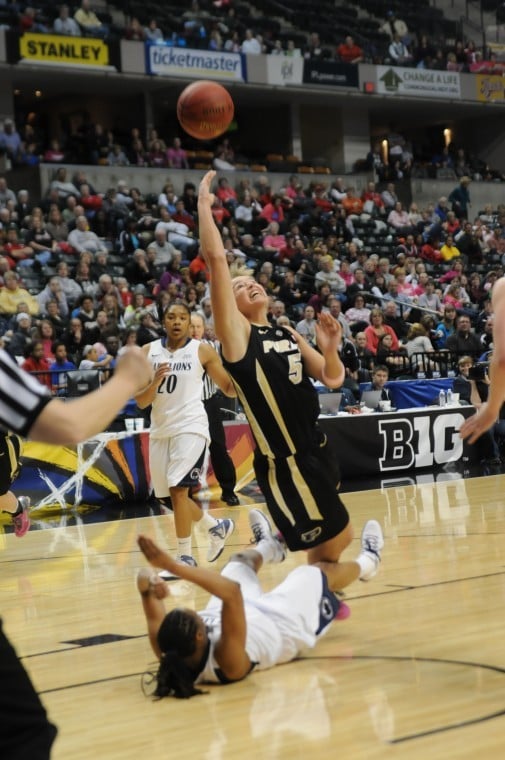 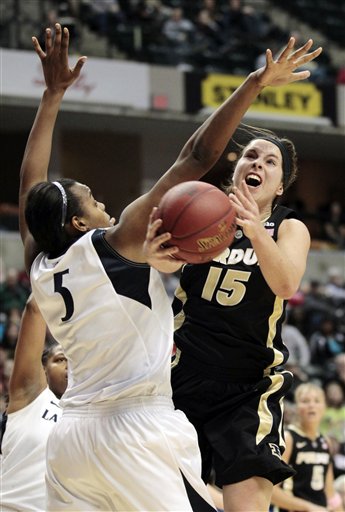 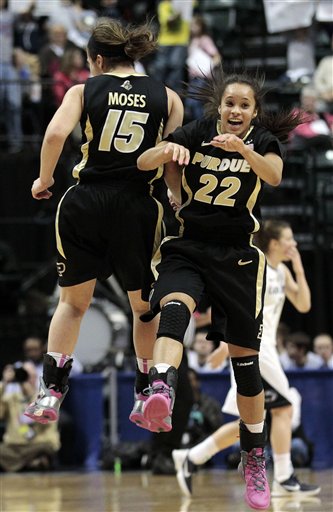 Purdue guards Courtney Moses (15) and KK Houser (22) celebrate while going into a timeout in the first half of an NCAA college basketball game against Penn State during the semifinal round of the women's Big Ten Conference tournament in Indianapolis, Saturday, March 3, 2012. Purdue won 68-66.

Purdue guards Courtney Moses (15) and KK Houser (22) celebrate while going into a timeout in the first half of an NCAA college basketball game against Penn State during the semifinal round of the women's Big Ten Conference tournament in Indianapolis, Saturday, March 3, 2012. Purdue won 68-66.

INDIANAPOLIS – The fourth-seeded Purdue women's basketball team put its fans through a nail-biter during a 68-66 semifinal victory Penn State, the No. 1 seed in the Big Ten Tournament, Saturday.

"Both teams had the will to win," Purdue head coach Sharon Versyp said. "We knew it was going to be tough on the boards, be a very physical game and envisioned that it would stay close down to the last possession. We executed exceptionally well and were able to finish at the end."

With just more than one second left on the clock, senior guard Brittany Rayburn made a heavily contested layup over 6-foot-4 Nikki Greene to life the Boilermakers. No. 9 Penn State inbounded the ball, but never crossed the mid-court line.

"I knew that the refs aren't going to decide the end of the game, it's just right not to do that," Rayburn said. "I knew that regardless of who was there I had to finish and I knew I had to get to the basket and not go for an outside shot."

In the first half, the Boilers ran into quick foul trouble. Rayburn and the team's top rebounder, junior forward Sam Ostarello, each picked up two fouls and were limited to less than 10 minutes.

Versyp said Purdue is not a team that always relies on a single player to perform, but expects everyone to step up when called upon.

"We're not about one player," Versyp said. "Every player on this team has stepped up and done some great things when people have been sitting, people have been injured. We've always had someone else."

The Boilers never trailed during the half, and the score was tied only briefly with just more than six minutes left. Purdue hung on to a 35-34 lead at the break.

The second half was a tug-of-war and the score remained close as each team went on brief scoring runs.

"I think both of us are pretty good defensive teams," Penn State head coach Coquese Washington said. "It was a struggle all night long for either team to get into a (scoring) rhythm."

The Lady Lions took the lead away from the Boilers for about 15 seconds of play before another Moses 3-point shot regained it for Purdue. Penn State never gave up, tying the score at 66 with 16 seconds remaining.  During a Boilermaker time out, Versyp designed the game-winning play.

"I think coach drew up a perfect play for us," Rayburn said. "It was a play that'd been working all the second half and we just kept going back to it. Chantel (Poston) made a great pass and the rest is history."

Moses finished the game with 21 points to lead Purdue. Rayburn added 14 points, six rebounds and forced her 28th charge of the season.

"Antionette brought so much energy and I thought that was good," Versyp said. "She didn't play as many minutes (against Michigan State Friday) so she had great legs ... I think her offensive boards was obviously the big difference."

Two statistics really stuck out in the Purdue win. First the Boilermakers won the rebounding battle significantly, 54-32. With such a rebounding advantage, what kept the Lions in the game is the fact that Purdue turned the ball over 21 times, compared to Penn State's eight.

The Boilers have only a few hours to turn around and prepare for No. 24 and 6-seed Nebraska in the championship game at 4 p.m. Sunday at Bankers Life Fieldhouse in Indianapolis. the game will be televised by ESPN2.

However, for a few hours Purdue can revel in its win over Penn State.