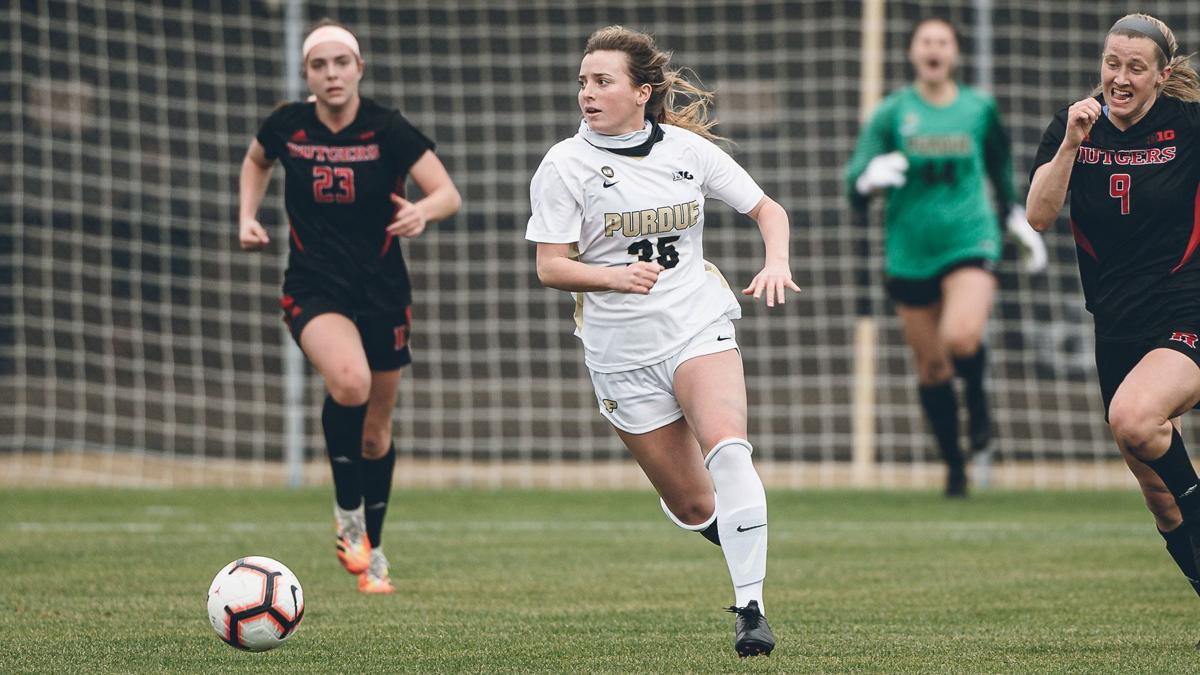 Then-junior forward Sarah Griffith dribbles the ball up the field during Purdue's Sunday game against Rutgers. 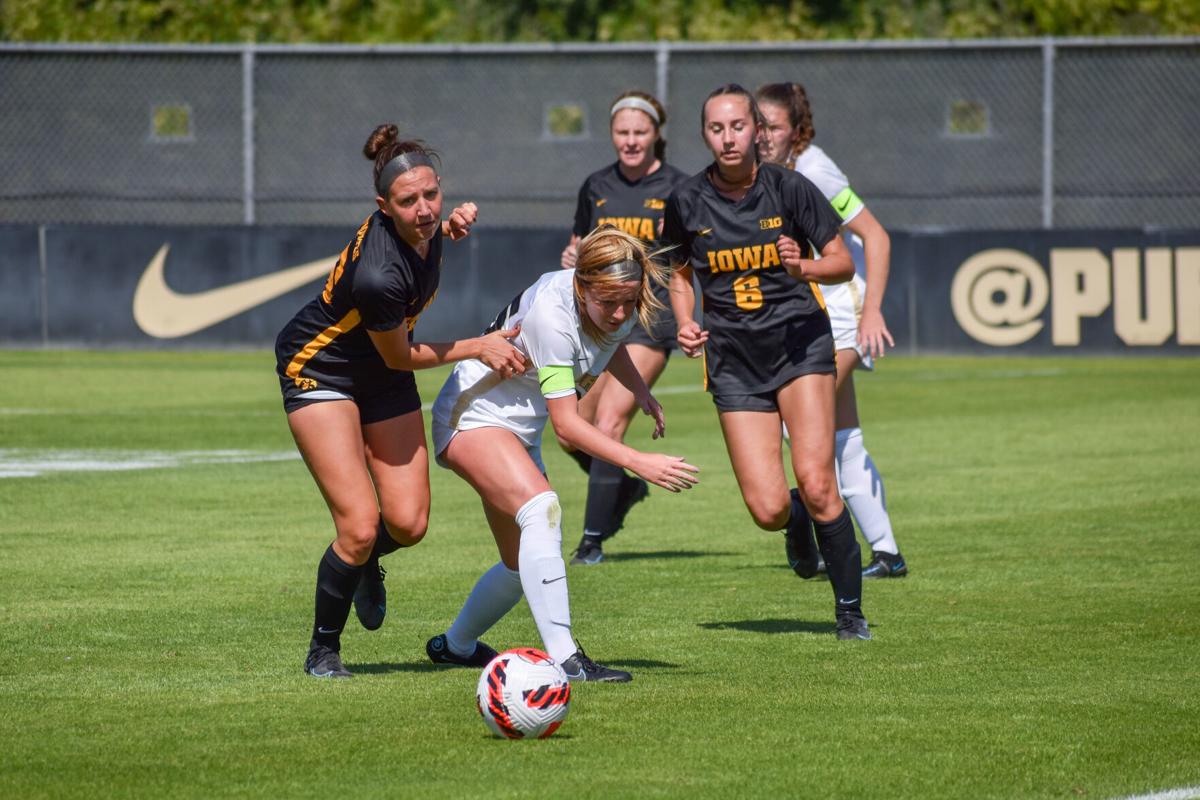 Senior forward Sarah Griffith lunges toward the ball between Iowa defenders. Griffith scored with less than a minute left in regulation to tie the game.

Then-junior forward Sarah Griffith dribbles the ball up the field during Purdue's Sunday game against Rutgers.

Senior forward Sarah Griffith lunges toward the ball between Iowa defenders. Griffith scored with less than a minute left in regulation to tie the game.

All words that have been used to describe fifth year forward Sarah Griffith.

The same Sarah Griffith who is on pace to have one of the greatest offensive seasons in Purdue soccer history.

Griffith started her season with Purdue’s game-tying goal, a shot that was aired on Sportscenter’s Top 10 plays. She said the incredible support the team received from the record-breaking Folk Field crowd was one of her favorite memories so far into the season.

From there, Griffith would continue to rack up goals and accolades, winning 3 Big Ten Offensive Player of the Week awards and another Sportscenter Top 10 goal.

Against Ball State, Griffith notched the sixth three-goal game in program history, Purdue Soccer’s Instagram account said. One of her Big Ten Offensive Player of the Week awards was won after back-to-back games against then-No.17 Michigan and then-No.18 Wisconsin where Griffith would score three goals.

Most recently when the Boilers played Minnesota, Griffith put a cherry on top, scoring the game-winning goal after the team erased an 0-2 deficit, the largest of the season.

That was also all on senior night.

Griffith didn’t just wake up one day as one of the best players in the Big Ten. Her story encaptures years of hard work, starting in Naperville, Illinois.

Sarah grew up with two brothers, younger brother Aaron Griffith and older brother Noah Griffith, who brought out her love for soccer at an early age. They would play “goalie wars” a game they created involving shooting goals at each other in their backyard — every day after school.

Though Aaron showed a competitive spirit when they played, Noah, who would go on to play soccer at the Illinois Institute of Technology and professionally for Bay Area FC, would often provide a challenge for Sarah. She had to channel an inner competitiveness of her own, one that’s now on full display whenever she steps on the collegiate level field.

Julie Bergstrom, head coach at Waubonsie Valley High School, said she knew Sarah way before she first became a Warrior. Bergstrom said she remembers when she first saw Griffith flash her potential playing against Noah when she was five years old.

“She was always out there, wanting to play with the ball,” Bergstrom said. “She was crafty with it. There was a special artistic ability that she had.”

Griffith led her team to place third in Illinois as a freshman and received all-state honors twice as an upperclassman. She was the Illinois High School Soccer Coaches Player of the Year and All-American as a senior.

“High school is where I really grew into myself,” she said.

Griffith’s recruitment process actually started when she was a freshman in high school. The recruitment rules have now been changed so that the process doesn’t start at that young of an age.

At the time, current Purdue head coach Drew Roff was the head coach at Illinois State. Knowing Bergstrom, he would watch and scout for players at Waubonsie Valley High.

“Sarah is one of those players that when I first saw her play, I saw her first touch on the ball,” Roff said. “I just said ‘wow, that’s the type of player we want.’”

Griffith and Roff’s relationship would continue to grow until she made the decision to commit to Illinois State as a sophomore in high school, Griffith’s mom Melissa Griffith said. Griffith decommitted and transferred to the Boilermakers after Roff was hired to coach Purdue in 2015.

“She picked a coach, not a school,” said Peter Griffith, Sarah’s dad. “We told her, ‘this is gonna be your parent for the next four years, this person will influence you in your studying and soccer more than anything else.’”

Roff would fulfill Peter’s prophecy, and in fact, be a key part in helping Sarah through one of the most difficult times of her life. She had dealt with tremendous back pain that would eventually force her to redshirt her sophomore year in 2018.

In a video produced by Purdue Sports, Griffith recounts her history with the injury, saying she had simply dealt with it throughout high school and her freshman year of college.

“I was never going to give up soccer no matter what anyone said,” Griffith said. “I would have gone to the end of the world to try everything.”

Griffith would seemingly end up going to the end of the world, experiencing “steroid injection, cortisone, epidural and trial nerve burning.” She would go six months of procedures before ultimately choosing to have surgery, one that fused her spine together with four screws, two rods and a cage. She said the strenuous recovery took a lot out of her physically and mentally, but her passion for the game pulled her through.

Director of Sports Nutrition Lauren Link would talk to Griffith about her future with the sport. Griffith said her realization of her future clicked after she reflected on her dream of playing professionally. Griffith knew she had to hold herself more accountable going forwards.

Going into this offseason, that mindset got fully encapsulated in the saying “leave no stone unturned.”

“I wanted to graduate and leave here knowing I did literally everything possible and whatever happened was meant to be,” Griffith said.

Fellow fifth year defender Maya Lambert said the phrase has turned into the team motto, one she said Sarah really lives by. The team even signed a plaque with the slogan.

Griffith said they do everything possible. She said it’s more than just practicing on the field and weight training, but mental preparation for games, hydration and fueling.

“When you have a player that has the talent and mental toughness who is also driven and willing to prepare to the fullest, that’s when you get an elite player,” Roff said.

Ultimately, that all helped build her physical traits and her one-on-one ability to stop and break down defenders with quick cuts and chops.

What also comes from leaving no stone unturned is her leadership that radiates throughout the team.

Griffith said she made everyone fully buy into the program as much as she had. She practiced with senior goalie Marisa Bova over the summer and was seen practicing with sophomore defender Kelsi Carrico, who is also recovering from injury before practice.

Griffith’s legacy is still being written.

The Boilers play four more games before heading into the Big Ten playoffs along with her future playing after college.

“She’s definitely already left her mark,” Roff said. “I’m excited to see what else she has in store over these next few weeks.”