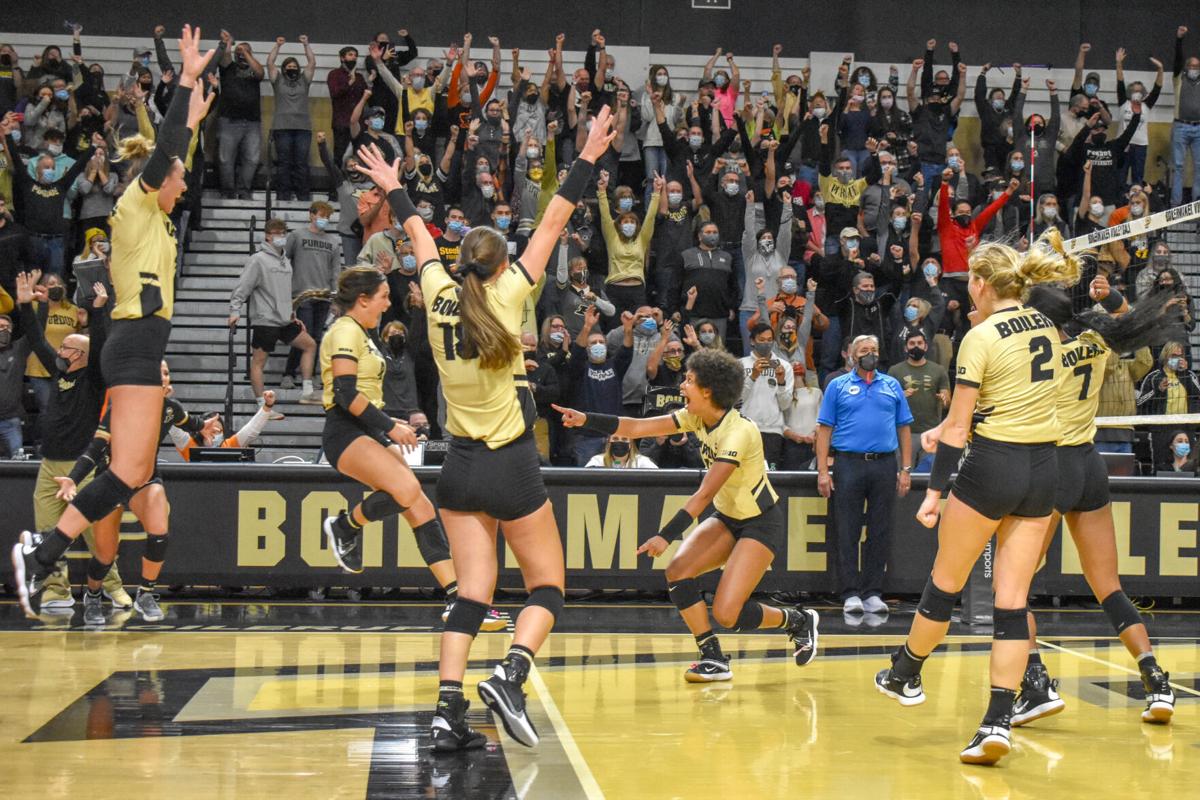 Purdue teammates jump with joy after notching the match point to clinch a 3-1 victory over then-No. 3 Wisconsin in October. 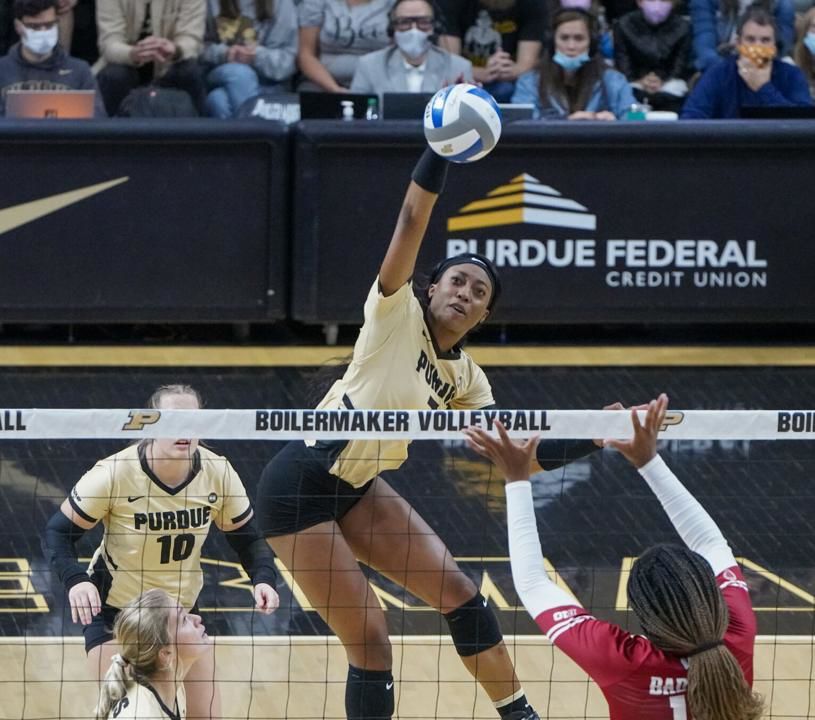 Freshman middle blocker Raven Colvin spikes the ball past a Wisconsin blocker during Purdue’s October match against the Badgers.

Purdue teammates jump with joy after notching the match point to clinch a 3-1 victory over then-No. 3 Wisconsin in October.

Freshman middle blocker Raven Colvin spikes the ball past a Wisconsin blocker during Purdue’s October match against the Badgers.

Coming off of a huge win against the then-No. 4 Wisconsin Badgers in Madison on Friday night, the No. 9 Purdue volleyball team had confidence heading into another Top 10 conference match Sunday afternoon, which was rewarded as it took out No. 8 Minnesota on the road.

Minnesota (17-7, 12-4 Big Ten) and Purdue (19-5, 11-4 Big Ten) played back-to-back matches nine months ago at Holloway, during the 2020-2021 season, with the Gophers rallying back from 2-1 deficits to win both matches in five sets. The Boilermakers found themselves up 2-1 again, but put away the final set to beat Minnesota on the road for the first time since 1998, snap Minnesota’s six-game conference winning streak and extend their own streak to five matches.

While the Block Party student section wasn’t in attendance, Purdue put on its own block party in the first set, logging five of its total 18.

The second set seemed to be the complete opposite of the first, as the Gophers took the frame 25-14. Newton only added one kill and Colvin added two. Senior outside hitter Grace Cleveland added three kills and one block, but the Gophers’ momentum in this set could not be stopped.

Although the third set appeared to be going in the direction of how the second set went, as Minnesota got off to a big lead early, Purdue rallied back to score 7 straight points to close the set. It was a neck-and-neck set that saw multiple aces and multiple serving errors put up by both teams. Just when everyone thought that this set would come to a tight finish, Purdue went on a 9-0 scoring run to take the set 25-16.

The fourth set started off tight, with neither team letting up a big scoring run. Senior middle blocker Jael Johnson had a huge block that, in the words of TV commentator Chris Vosters, “gave this team a spark.” The Boilermakers held onto a narrow lead to the fourth set 25-22 to win the match 3-1.

Newton had a stellar set performance, adding nine kills to finish with 19 on the match. Colvin also added two kills, but it was freshman defensive specialist Ali Hornung who came in towards the end of the match with two strong serves that helped to put Purdue on top.

“The maturity of this team shows and the dedication allows them to really coach themselves,” Shondell said. “After beating Wisconsin, they came to the realization that we can win this thing.”

This win certainly helps the Boilermakers in making their case to be a top team in the Big Ten, putting them third in the Big Ten standings behind No. 11 Nebraska and Wisconsin.